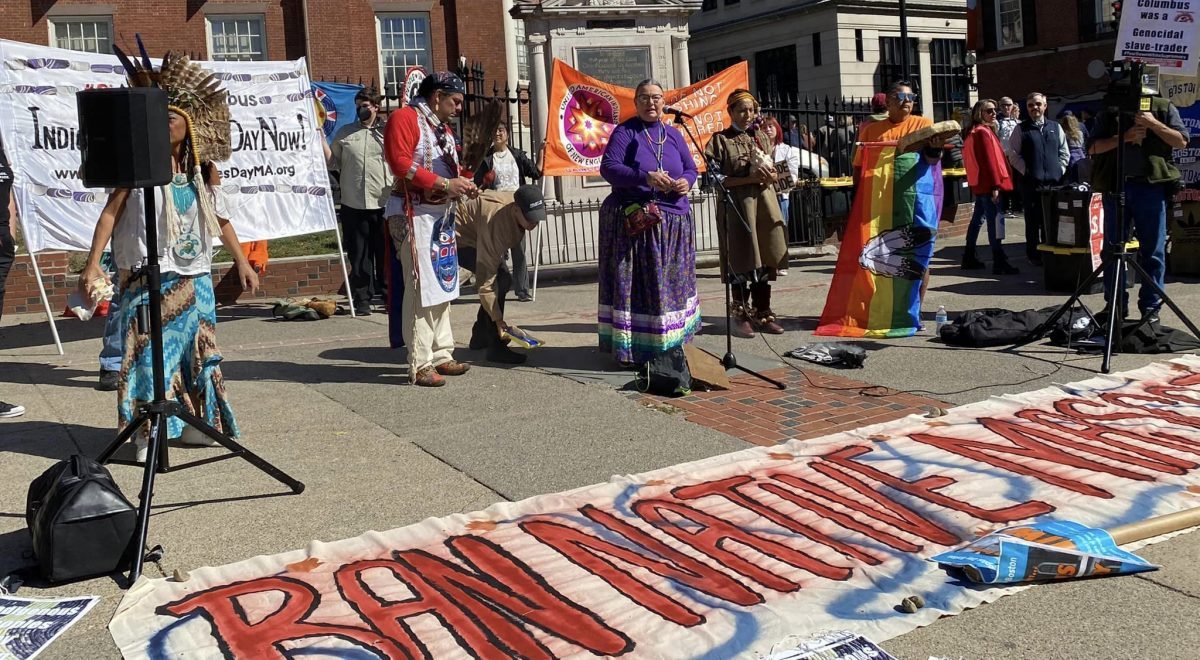 Indigenous people and their allies rallied and marched in Boston on Saturday, October 8, 2022 to observe Indigenous Peoples Day in Boston and demand that the MA state legislature vote to establish the day statewide which will replace Columbus Day. They called on the presumed next Governor, Maura Healey, to make it a priority to support this and other Indigenous-centered legislation (MAIndigenousAgenda.org). Furthermore, because Indigenous liberation is intertwined with Black liberation, they also call edfor Faneuil Hall, named after a slaver, to be renamed.

Mahtowin Munro (Lakota), co-leader of United American Indians of New England (UAINE) and lead organizer for IndigenousPeoplesDayMA.org, explained: “Indigenous Peoples Day is being declared in cities and towns all across Massachusetts and across the country. We call on the MA State Legislature to step up now and pass our statewide Indigenous Peoples Day bill and our other legislation currently before them, including bills to ban Native American team mascots, to provide for Indigenous curriculum content in the public schools, to protect sacred Native American heritage, and to improve educational outcomes for Indigenous students. We call upon the federal government to stop destructive pipeline and mining projects that run through and endanger Indigenous lands. We call upon the government to take all necessary steps to stop the release of radioactive water into the Plymouth MA area by Holtec at the decommissioned Pilgrim Nuclear Power Plant.”

“Land back means that the land is returned to us so we can take better care of it… as a starting point we need all the national and state parks back to indigenous hands” –@mahtowin1 #IndigenousPeoplesDay pic.twitter.com/U2edzJASI2

“Indigenous Peoples Day means more than celebrations and spectacles. This is a day for all of our relations to march and have their demands known. Our families are on the frontlines of systemic injustices. We demand a dedicated day and increased support for our health and wellness,” according to Jean-Luc Pierite (Tunica Biloxi), President of the Board of Directors of NAICOB (North American Indian Center of Boston).

Raquel Halsey, Executive Director of NAICOB said, “Native women and Two Spirit relatives in grassroots leadership positions work tirelessly to protect our rights and our lands. What we must also remember are our urban Indian communities that build in coalition spaces. Even away from our traditional territories, our lives are shaped by experiences and living memories of stolen children and missing or murdered Indigenous peoples.”

…taken over the intersection at Park and Beacon, “The destruction of our people started here. We want our Land Back. It’s more than Indigenous Peopels Day, it’s access to tradition. We fight for reproductive justice, our language, our children”— Raquel Halsey @NAICOB91 pic.twitter.com/yxYAnYOKNT

Kimimilasha James, an Aquinnah Wampanoag youth leader with United American Indians of New England (UAINE), said, “As someone who was born in Boston but never felt that Indigenous people were welcomed by the city government, I appreciate that Mayor Wu and members of the Boston City Council have reaffirmed the Executive Order of former Acting Mayor Janey and understand the importance of engaging with Indigenous communities and celebrating Indigenous Peoples Day.”

She continued, “However, we were just informed that Mayor Wu chose to proclaim October 10, 2022 an Italian American Heritage Day as well. We note that the entire month of October is Italian Heritage Month in Massachusetts. They have an entire month. The Mayor’s failure to realize that Indigenous peoples should have this single day without sharing it with Italians or anyone else is disgraceful. As part of getting rid of Columbus Day, Italian heritage needs to be uncoupled from Indigenous Peoples Day, especially because unfortunately many in that community have celebrated Columbus for decades at our expense. In a city and country that largely erases Indigenous people, Indigenous Peoples Day is a day to learn about and celebrate Indigenous history and contemporary Indigenous peoples and cultures. It should be only a first step for Boston to begin to build relationships with Indigenous people and begin to address the many injustices faced by us here and elsewhere. It is time for us to stop being largely ignored and erased.”

Heather Leavell from the organization Italian-Americans for Indigenous Peoples Day said: “Italian Americans for Indigenous Peoples Day believes a holiday that celebrates the resilience of Indigenous peoples is far more truthful and uplifting for all residents of the Commonwealth than one that honors a brutal colonizer. By taking this important step toward truth and justice, those of us who are part of the dominant culture will take collective responsibility for our misplaced adulation of Columbus and help to create an environment where healing can begin. In addition, Indigenous Peoples Day must be celebrated as its own stand-alone holiday on the second Monday of October. This is one small step Italian Americans – and the dominant culture as a whole – can take to begin repairing the harm of centuries of oppression and erasure. It is our hope that Mayor Wu and all residents of the Commonwealth see Indigenous Peoples Day as we do: as a gift for the benefit of us all.

Kevin C. Peterson, founder of the New Democracy Coalition said, “This day represents our continuing effort to roundly articulate the issue of justice for Indigenous people. We recognize this day not only as a matter of celebration but as a way of expressing that much remains to be done in recognizing the dignity and value of indigenous people who speak wisdom into the American culture and make it worthy of life.”

A Cultural Survival representative said, “After years of failing to make a bill to change Columbus Day to Indigenous Peoples Day a priority, Massachusetts has lost the opportunity to be a leader for Indigenous Peoples’ human rights. What are we waiting for? Cultural Survival urges political leaders in Massachusetts: Be brave enough to acknowledge the harms of our colonial past and lay a foundation that honors the Peoples whose ancestors first welcomed Europeans to these shores. Take this opportunity to do right by Indigenous Peoples in this state, who have been asking for this name change without response for far too long. Commit now to establishing Indigenous Peoples Day across the Commonwealth in the next legislative session.”

-Address the disproportionate impact of racial injustice and economic inequality in regard to Indigenous Peoples who live here.

-No projects on Indigenous lands without free, prior and informed consent.

For decades, Indigenous people have been calling for an end to the public celebration of Christopher Columbus. They demanded that Indigenous Peoples Day, a day to honor Indigenous Peoples from throughout the Americas, replace Columbus Day on the second Monday in October because of the date’s significance. They consider it a first step toward recognizing the genocide of millions of Indigenous people and the theft of their lands that began with the arrival of Columbus. It is a meaningful symbolic gesture in addressing the pain caused to Native Peoples by the many years of public celebrations of Columbus as a hero.