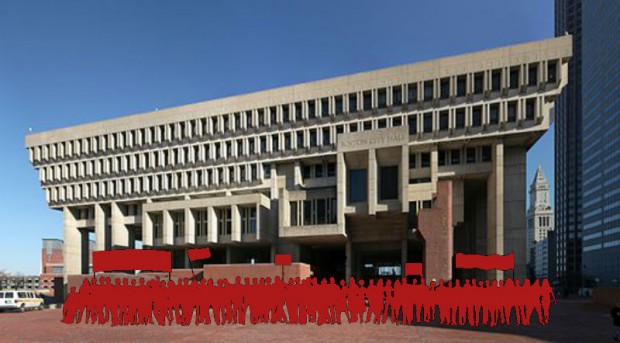 Boston To Protestings Students: You’re Not Worth It

Above Photo: From progressive.org

The student protest outside of Boston City Hall was winding down. Of the 1,000 students who’d walked out of their schools for the second time this spring, about 100 were left, waiting to get inside in hopes of testifying before a City Council committee against proposed school budget cuts. First, though, the students had to pass through a metal detector, a process as inefficient as an airport TSA line. “This is what democracy looks like,” they chanted, a protest staple that for once felt almost true. “The whole world is watching,” they shouted, amplified by the hulking architecture of City Hall.

Boston Globe writer Joan Venocchi chided in her column the day after the protests:“Much of the world cares little about those Boston public school students who chanted loudly outside City Council chambers on Tuesday afternoon.”

If that seems like a churlish take on a student exercise in direct democracy, welcome to Boston. A spring of student activism has been met by a dreary season of adult disdain. After students, most from the city’s high schools, walked out of their schools en masse in March, turning up on the Boston Common 2,000 strong, the city’s chief adult, Mayor Marty Walsh, was quick to cite adult influence as the cause.

Walsh later backpedaled on some of the high school budget cuts, but has never backed away from his insistence that Boston’s students are being manipulated by adults who are feeding them “bad information.”  Much of this bad info, by the way, was confirmed when a McKinsey audit recommending that the city shutter 40 percent of its school went public thanks to a parent group that filed a public records request. As Walsh, Venocchi and a small army of old scolds likes to remind the students at every opportunity, the Boston schools budget, now topping $1 billion plus, is bigger than ever, even at a time of declining enrollment.

Left unstated is a nasty undertone: you’re not worth it.

Boston’s school budget conundrum is complex but it boils down to this: rising expenses across the system, including the biggest, teacher salaries, mean that there is less to spend on “extras.” Since much of what is spent at the elementary school level is mandated by law, cuts this year are falling hardest on the high schools. Meanwhile, charter high schools continue to expand. This spring, the state Board of Education approved two more of these, bringing the total number of charter high schools in the city to 16. As these new schools expand, enrollment, and the student funding that accompanies it, is dropping. This means that the city’s high schools, including popular small schools themed around art, community leadership and STEM, are now facing the loss of what drew students to them in the first place. The latest round of education reform is now consuming the previous wave.

The students who’ve been protesting this spring may not use words like “portfolio district” or even “education reform,” but they are fluent in the language of diminishing opportunity.  At the John D. O’Bryant School of Math and Science, an exam school with a mostly minority student body, that means that foreign languages are on the chopping block. “They want to shrink language classes so that only a few students will be able to take them at a time,” junior Sarai Ortegon tells me. “French is one of my favorite classes. It’s what I look forward to every day and not having that would really break my heart.” Ortegon says she still doesn’t know whether she’ll be taking French again next year or not, but that her teacher is leaving.

In the grim calculus of school-based budget cuts, “extras” like French and music, art and debate are the first to go. But what students like Ortegon explain to anyone who will listen is that these are the very things that get them to school and keep them there. Sixth grader Nessa Russen attends the Joseph Lee school and is a member of the debate team there, an “extra” that will soon be eliminated due to cuts. I ask her what she’d tell Mayor Walsh were she to get a meeting with him and she says that she’d urge him not to cut art, gym and music, but to expand them. She replies:

I’d ask him ‘what about the younger youth?’ What about girls who are little now? What’s going to be there for them? If they end up dropping out, that’s just bad.

Listen to students who are participating in the biggest protests in recent memory and you’ll hear what sounds like a different language from the adults who preside over the city’s endless schools debate. The students speak the language of “we.” When they talk about fearing for the future of the Boston Public Schools, they’re not just talking about slashed programs and laid off teachers at their own schools.

“I came because I have friends, and my little sisters, who in the future will be going to Boston Public Schools,” 17-year old Sean Hargrove told the Boston Globe. Hargrove attends City on a Hill, a charter high school unaffected by the budget cuts. Like many charters here, his is awash in private donations, which means that it offers the kinds of extras, like Saturday test coaching and one-on-one college counseling, that are out of reach for most district schools. “I feel like this is a teachable moment, because this is a time when teenagers came together and stood up,” Hargrove said.

The Globe’s Venocchi described Boston’s student protesters as holding onto the status quo, meaning that they don’t want to give up what they have. But the status quo in Boston also means that a student body that is Black and Latino, and overwhelmingly low income, has always been treated as less than students in the more affluent—and whiter—suburbs that encircle the city. In 1963, some 8,000 students and their supporters marched through Roxbury to a civil war era school, the Sherwin, to protest segregation in Boston’s schools and the vast inequity of resources between schools attended by Black students and their white counterparts. The Sherwin is long gone and the Roxbury march mostly forgotten, but the demands being made by Boston’s students are still the same. More than 50 years later, inequity is the status quo.

“We looked around at the districts surrounding Boston, where these kinds of cuts aren’t happening. We saw that it’s only happening here,” Bilal Lafta, a protest organizer and a senior at the Boston Community Leadership Academy, one of the schools hit hardest by the cuts, wrote in a recent blog post:

And if you analyze the demographics of the Boston Public Schools, you realize that white students are the minority and that the district is overwhelmingly Black and Hispanic. We see these facts and we start to wonder if it’s racism.

One of the last student protesters to testify before Boston City Council members was Ben Nye, who was finally called to speak nearly four hours after the hearing had officially begun. He described to them the difference between the school he’d attended in Foxboro, a suburb south of the city home to both the New England Patriots and one of the state’s top high schools.

“I thought there would be equal opportunities in Boston but that wasn’t the case,” said Nye. Like 6th grader Nessa Russen, Nye is a debater. The debate team at his school in Boston’s Dorchester section is making what will likely be its last trip to the national championships before the budget axe falls. Nye urged the councilors to think about the future.