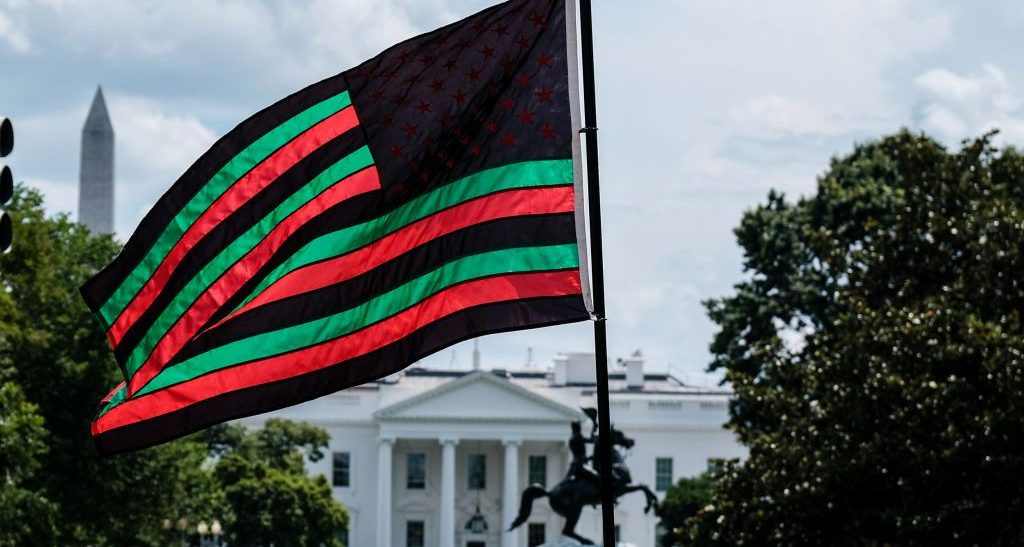 Above Photo: Michael A. McCoy / Getty.

It’s patronizing to say this is a step in the right direction; especially when some roads are littered with landmines.

Every once in a while, I imagine myself watching the news with Frederick Douglass to gauge American progress since his era. When he heard Juneteenth was just made a national holiday, y’all should’ve seen his face. I gather it was a slight distortion of the same expression he had on June 19, 1865.

By now, you’ve seen all the poignant memes highlighting the symbolism versus substance ironies of this federal recognition. In accordance with other holidays, I ask two simple questions:

I believe the reason there’s more disdain than pride is because it feels like we’re honoring a crime – a day commemorating the end of a 2 ½ year hostage negotiation where the captors were not punished yet instead compensated for the inconvenience of slavery ending.

Our collective cases of injustice and reparations have been made with overwhelming evidence. Unfortunately, our moral victories aren’t moving the needle enough to ensure that our lives matter. It might be time to reject these trophies of courage and resilience while perpetrators of violence against us get slapped with feathers. No more ceremonies acknowledging injustices if it’s not accompanied by legislation that prevents it. As we have these national “enlightenment” moments of events like Tulsa, where are the laws that protect Black people from the impulses of that white rage repeating?

What is the excuse to not perform the following 5 steps?

We have to accept the reality that this country is fueled by our oppression, which means we are negotiating with domestic terrorists. Any other beacon of democracy would’ve at least made Election Day a holiday but they know it empowers Black and poor people (of all colors) to make the system live up to its actual doctrines.

It’s patronizing to say this is a step in the right direction; especially when some roads are littered with landmines. Have you ever tried to explain this Congressional gridlock to Black people who are highly critical skeptics of how participating in our political system benefits them so they traditionally don’t vote but turned out for both the presidential and the Georgia runoff elections? The follow-up question is simple: Okay, now what do we get?

Well, now, all we have to do, is get 60 votes. But there’s this one Senator from West Virginia, not to mention the filibuster, and we gotta hope another Supreme Court Justice doesn’t die or certain decisions we take for granted will be reversed, now we just need you to do it again next year but understand the lines will probably be longer and I can’t bring you or your grandma any water…n-gga what? I thought you said Kamala would have the deciding vote.

Our political parties have turned into a reality show that functions as a farce. Both parties uphold this sham, selling us democracy as a brand while utilizing exploitative tokenism as brand ambassadors. One cherry picks self-hate puppets by their bad haircuts and the other regulates inequality with benefits in a single file line. Of course, I lean left but I’m done applauding decency and empathy, now my praise is only reserved for action.

Happy Juneteenth! The first U.S. holiday that’s illegal to teach about in 15 states.

There comes a point when the constant pairing any group of people with the word “disproportionate” starts to tread into the legal territory of “intentional.” This is what hard data and social patterns since 1865 reveal.

Yet here we are, surrounded by descendants of sociopath kidnappers who want us to be more grateful for what they think our freedom should look like. Many have this warped self-perception of altruism while supporting infrastructures of caged bird entrapment. How many generations of Black people must endure perennial gaslighting from pyromaniacs prone to burn crosses, churches and Tiki torches? Martin Luther King Jr. once articulated a deep fear in leading Black people into a burning house – that wasn’t just metaphorical.

In this American social experiment, based on King’s hindsight self-reflection; when you combine current divided sentiments, meaning the hollowness of this holiday and mix it with the vitriolic anti-CRT rhetoric, one can easily forecast an endless plague of segregated citizenship where the integration of people will be rendered an ineffective union without the integration of honest race-related curriculum.

They used to be able to bury the bones and whitewash the books, but now we see the remains expose too much history to revise, so they’re just trying to burn whoever tells the truth. We are that actualized history and I refuse to turn it into ash at their expense.

With that said, as far as I’m concerned, if certain demands of social justice and equity aren’t met in one year, I vote to use Juneteenth 2022 as a day of protest. As serious as I am, sadly, my reality of realized change is blurred by my imagination, which presents itself with both the optimism and cynicism of our ancestors. Just like my conversations with Freddy D, I had the chance to talk with North Carolina Congressman George Henry White. On January 20, 1900, he introduced the very first bill to make lynching a federal crime. When I told him the bill has never been passed, he asked me, “what year is this?”