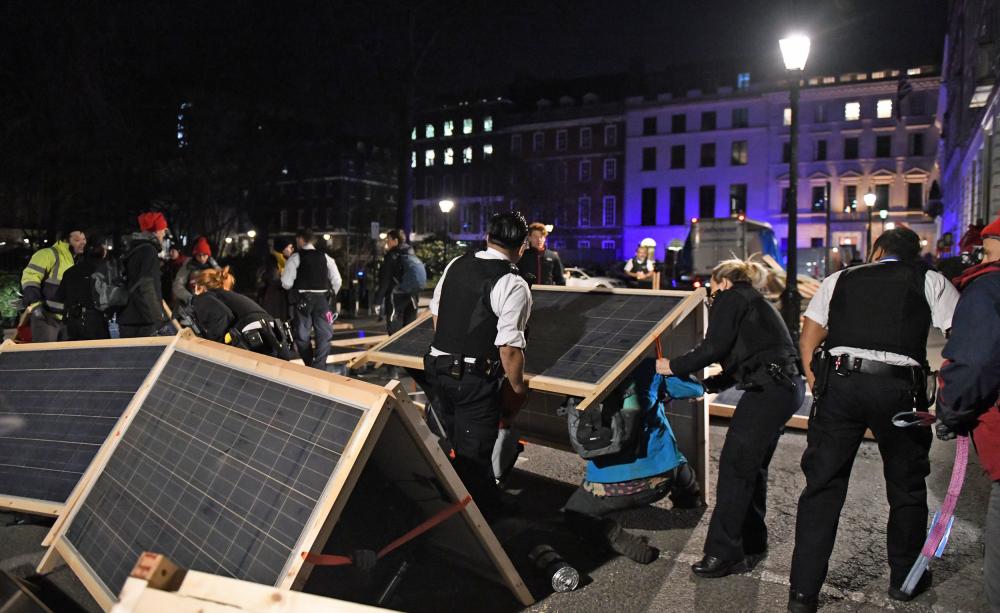 Above Photo: From Theecologist.org
Bernard Looney arrives at BP on first day as chief executive to be met with activists with 500 solar panels.
Greenpeace members have blocked BP’s headquarters with solar panels and oil barrels to mark the first day of the oil giant’s new chief executive.

More than a hundred environmental activists took 500 solar panels to the central London building at 3am today (Wednesday) as Bernard Looney prepared to take up his new role.

Some protesters sat underneath the solar panels after they were prevented from installing them on the pavements and roads near the office.

Others locked themselves to oil barrels bearing the BP logo in front of the six doors around the building to stop staff from entering.

Around half of the activists remained outside the HQ in St James’ Square, close to Piccadilly Circus, four hours after the start of the demonstration.

One protester, Richard George, said: “This morning police managed to block our solar installation, but BP is trying to block the transition to clean energy on a global scale.

“It’s lobbyists have the ear of governments around the world, they spend millions blocking action to fix the climate emergency and billions on drilling for more oil and gas to make it worse.

“Floods, droughts, forest fires and hurricanes all over the globe start right here with the plans made in BP’s headquarters.”

Mr Looney, who joined BP in 1991, will begin his time as chief executive on Wednesday, taking over from Bob Dudley, who steered the oil major through its response to the Deepwater Horizon spill in 2010.

Mr George continued: “It’s new CEO needs to accept that, if BP wants to keep trading in the 21st century, it needs to switch to 100 percent renewable energy.

“We’re not going to settle for a green-themed rebrand, solar panels on their petrol stations or wind turbines on their oil rigs.

“The only realistic response to the climate emergency is to cut emissions. BP needs to stop wasting billions drilling for more oil and gas that we simply can’t burn, and produce a plan to get out of the oil business entirely.”

BP has frequently been challenged by climate change activists, who have targeted its sponsorship of art institutions, and its alleged lobbying.

In June, protesters from Extinction Rebellion targeted the Royal Opera House during a BP-sponsored screening of Romeo And Juliet.

Last year, the Royal Shakespeare Company ended its partnership with the oil firm, which had sponsored the theatre’s £5 ticket scheme for 16 to 25-year-olds.

The RSC said: “Amidst the climate emergency, which we recognise, young people are now saying clearly to us that the BP sponsorship is putting a barrier between them and their wish to engage with the RSC. We cannot ignore that message.”