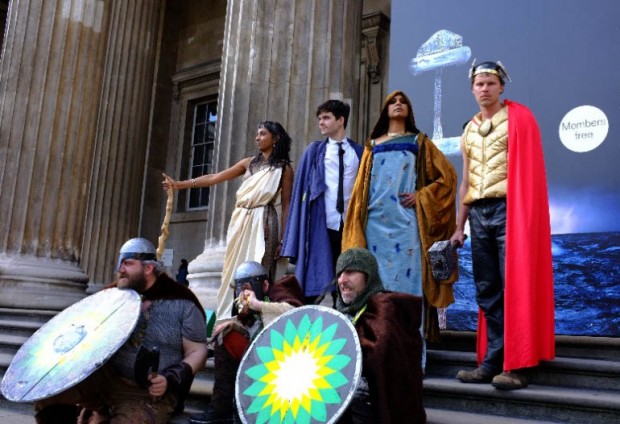 The performance aimed to point out the irony in the fact that an oil company accused of recklessly plundering natural resources is sponsoring an exhibition about some of history’s most famous looters and pillagers.

The performance came shortly after the same group launched a spoof Viking film based on the exhibition’s promotional trailer, and a petition calling for an end to the British Museum’s BP sponsorship deal, which is up for renewal in 2017.

A large crowd of museum-goers gathered to watch the performance. Security guards looked on, but did not interfere. After the performance, several people dressed as Vikings stayed inside the museum to hand outanti-BP flyers to the public, and the cast performed again outside the museum. 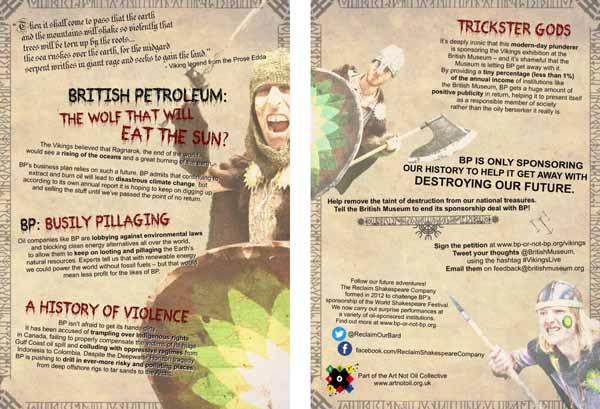 At 3.30pm, a flashmob choir suddenly started an a capella version of ‘Ride of the Valkyries’ in the Museum’s Great Court, featuring lyrics about oil spills.

This drew a crowd of museum-goers who then watched with interest as a gang of oil-stained ‘BP Vikings’, heavily branded with the oil company’s logo, marauded through the space. They then struck a sponsorship deal with the Norse god Loki to help them profit from Ragnarok, the end of the world.

The gods Thor and Freyja arrived to deal with Loki and the performance concluded with applause from the audience and a crowd of people chanting “No BP! No more looting!” while symbolically ejecting the BP Vikings from the Museum.

The British Museum continues to defend its controversial sponsorship relationship with BP, despite:

A new infographic by oil-industry watchdog Platform shows that the amount of money given by BP in its sponsorship deals with the British Museum, the Tate, the Royal Opera House and the National Portrait Gallery only makes up a tiny part of their overall incomes.

For example, BP provides less than 1% of the British Museum’s annual income, but receives a large amount of high-profile branding in return, as well as the use of the largely publicly-funded Museum for its corporate events.

Pressure on cultural institutions to consider the ethics of their sponsorship deals is currently high. Earlier this month, the veteran human rights campaigner Archbishop Desmond Tutu said “People of conscience need to break their ties with corporations financing the injustice of climate change.” 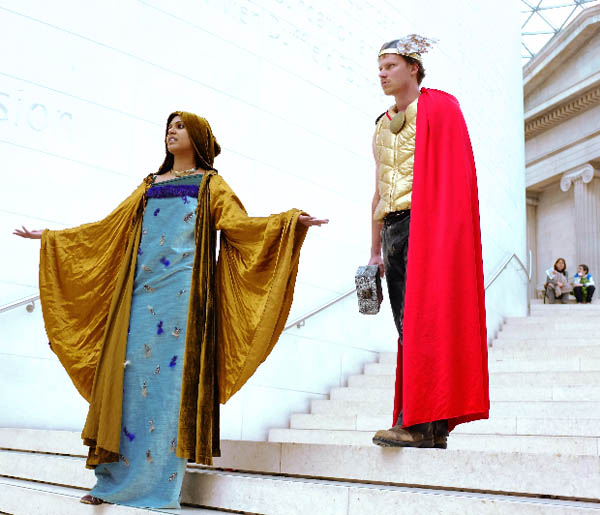 The campaign is working

Following months of pressure, the Southbank Centre suddenly ended its long-running sponsorship deal with Shell earlier this year. Pressure is also growing on the Tate over its refusal to reveal details of its BP funding, despite being ordered to by the Information Commissioner. 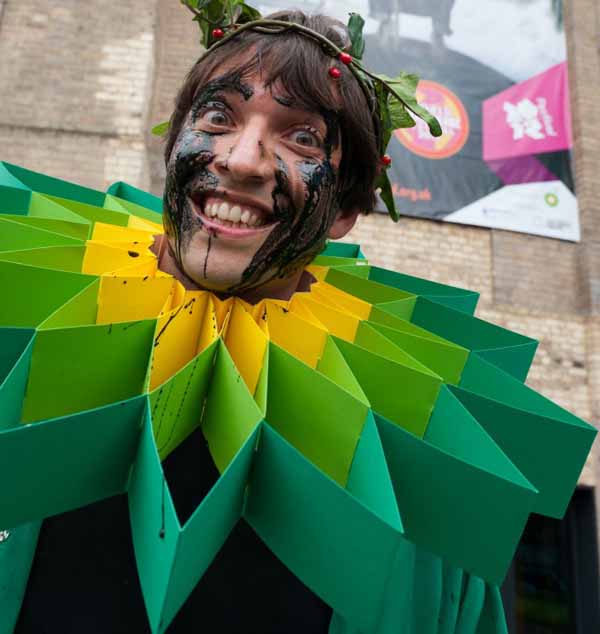 BP is the British Museum’s most longstanding corporate partner, supporting the museum since 1996, and regularly sponsoring major exhibitions. There has been a BP Lecture Theatre within the Museum since 2000.

Westley Ingram, who played a BP Viking in the guerrilla performance, said: “BP is officially the world’s biggest corporate criminal, following the Gulf of Mexico disaster. Its activities in the tar sands, the Arctic, and elsewhere are locking us into a future of disastrous runaway climate change.

“The British Museum should sever all ties with BP, because this sponsorship deal is giving the company a veneer of respectability that it does not deserve.”

Guy Martin, who also played a Viking, said: “As the reality of climate change becomes ever clearer, the case for ending oil sponsorship of the arts is gathering momentum.

“Both the RSC and Southbank Centre seem to have taken steps to no longer act as a figleaf to hide the destructive activities of oil companies such as BP and Shell. The British Museum, Tate Galleries, National Portrait Gallery, Science Museum and others must now do the right thing and follow suit.

“We need decent public funding for arts and culture that doesn’t allow unscrupulous companies like BP to buy themselves such a dangerous level of public credibility.”

Then there’s the small matter of our appearance on Channel 4 News. Last night, our protest served as a lead-in to a long segment all about the problem of oil sponsorship of the arts. This included an interview with top playwright Mark Ravenhill about how actors felt unable to speak out about oil sponsorship of the theatre, for fear of losing their livelihoods. It also included a live studio debate with our very own Sheila Menon, also known as Spakona the seeress:

We’re aware that this appearance on the national TV news has been the product of years of dedicated work by all the members of the Art Not Oil coalition, not just us. Every artistic intervention by Liberate Tate, every hard-hitting publication from Platform, every piece of harmonic disobedience by Shell Out Sounds, every fact-packed article by Science Unstained, every piece of creative action by London Rising Tide – all of these have helped to push the issue of oil sponsorship up the media agenda to the point where our grassroots collective can make prime-time TV news. Now we need to build on this exposure and kick oil sponsorship out of arts, culture and science once and for all. 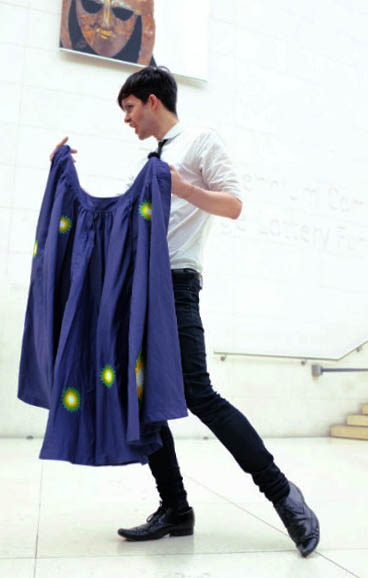 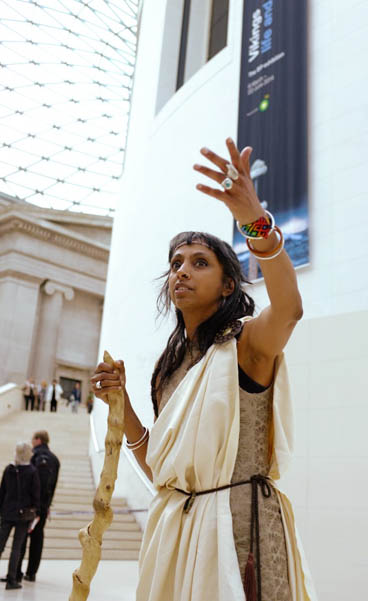