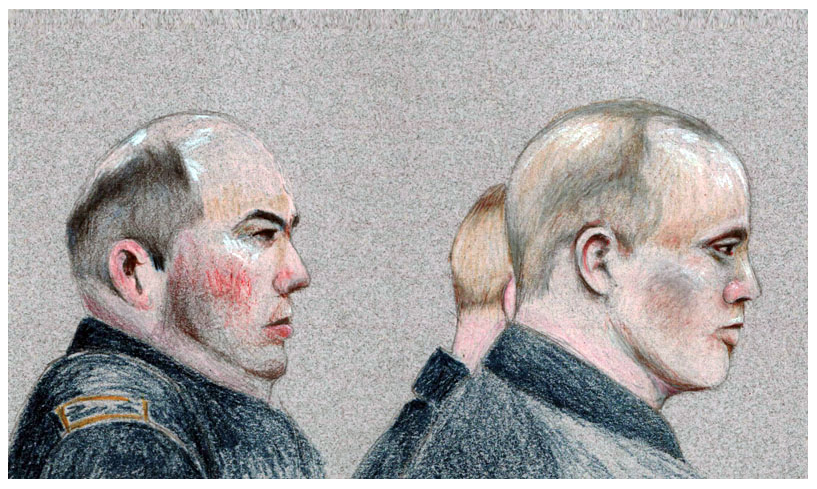 The government rested its case against Bradley Manning last week, and the defense began its case today with the announcement that it filed four motions to direct a not-guilty verdict. The defense moved to dismiss the aiding the enemy charge, a Computer Fraud and Abuse Act charge, the federal larceny charge, and specifically the charge that Manning “stole” the U.S. Forces in Iraq Global Address List. Prosecutors have until Thursday, July 11, to respond to that motion, after which Judge Denise Lind will rule.

Judge Lind asked the defense to proceed despite that motion, and the defense began by playing the unedited version of the ‘Collateral Murder’ video, of U.S. Apache gunners shooting Iraqi civilians and Reuters journalists. Defense lawyer David Coombs played the video to verify that it matched a transcript of the video, which he entered as evidence.

Then the defense called Chief Warrant Officer 2 Joshua Ehersman, who supervised security for Manning’s intelligence division in Baghdad, to the stand.

CW2 Ehersman testified that intelligence analysts were allowed to download classified information to CDs, to save information because their computers crashed several times per week. There were no restrictions on what soldiers were allowed to burn to a CD. They also put information on CDs to share it with their Iraqi counterparts and to transport files too big to keep on their computers. These CDs were supposed to be marked with their classification levels, but Ehersman admits this wasn’t always done.

Ehersman said Manning was the best junior analyst in the intelligence division, and said he was the “go to” guy to help with computer problems, and that his work products were the best in the division. Manning was in the ‘Future Ops’ division, which involved preparing assessments that would help soldiers plan for what to expect. This work included data mining, which meant searching all available databases across the Secret network to cull data for an intelligence report. He said that Manning had a lot to learn in the assessment portion of intelligence, but that this was expected of a junior analyst.

He discussed the Iraq and Afghan War Logs, known to analysts as SigActs (Significant Actions), and what they comprised. He described SigActs as a historical record, capturing past events, used for creating density plots and mapping trends over time. He said SigActs did not reveal names of key sources, because that would be Top Secret information.

He also testified about program use. Ehersman said that soldiers were allowed to run executable files from CDs without any restrictions. They weren’t allowed to add programs to the computers’ hard drives, because that’d require administrative access, but they could use a shortcut on the desktop to run an executable file from a CD.

After lunch, we heard from three members of Bradley’s unit in Iraq. Sergeant David Sadtler testified that Manning was the only one in the intelligence section who really kept up with current events outside of the mission, and that brigade staff would go to him to find out what was going on in the world.

Sgt. Sadtler said that Manning came to him, sometime after he arrived in December 2009, concerned about the Iraqi police arresting detainees for printing “anti-Iraqi government propoganda.” He said Manning seemed upset about the evidence, but Sadtler didn’t do anything about it. He said Manning had a “deep belief in the news and what was going on, whereas other soldiers were more concerned about going about their day.”

Captain Steven Lim, whom Manning worked under, testified about Manning’s skill in data mining, statistical analysis, and trend analysis. Capt. Lim said that the TSCIF – where intelligence analysts worked with classified information up to the Top Secret level – did not have an SOP, or standard operating procedure, which would have let soldiers know what they could and couldn’t do in the TSCIF.

Capt. Lim said soldiers were allowed to listen to music from the shared drive or from the classified internetwork, but that playing games or movies would be against their user agreement. However, he said no official guidance was put out regarding whether running executable files (such as video games, or Wget) on their work computers or from a CD was permitted. He confirmed that computers crashed frequently, and that there were no restrictions on downloading information to a CD to prevent losing it.

He said good analysts were expected to use all available tools and databases, including old SigActs, the State Department’s diplomatic cables, and open source (non-military) information when data mining — though the government established on cross-examination that Lim thought he wasn’t expected to surf the Afghanistan database.

Capt. Lim said that key sources were referred to by number, but that occasionally some could be identified by name by mistake. He said he wasn’t sure if the war logs revealed Tactics, Techniques, and Procedures (TTPs), but said that the enemy could use data like Battle Damage Information (BDI) – which documents how a vehicle was impacted by an enemy attack. The defense established, though, that that information was already readily available to enemies who could see how vehicles were impacted out in the open.

The defense also made a point of asking, as it has for many witnesses who would know, about what an intelligence gap is. Whether foreign adversaries used WikiLeaks was listed as an intelligence gap in the Army Counterintelligence Report that the government is using as evidence of Manning’s knowledge. Capt. Lim testified, as others have, that a gap refers to information that the U.S. doesn’t have, and wants to investigate further.

Capt. Lim testified that he didn’t recall any training claiming  that the enemy used WikiLeaks specifically. Asked if he saw anything on the enemy using WikiLeaks in an unofficial capacity, Lim said “only on TV and in the media.”

Lauren McNamara, who chatted with Manning (when she was known as Zach Antolak) from February–August 2009, then took the stand, confirming portions of the chat logs so that the defense could admit the logs as evidence.

The defense reviewed portions on Manning’s hopes to save lives and learn more:

8:07:20 PM bradass87: same thing with me, im reading a lot more, delving deeper into philosophy, art, physics, biology, politics then i ever did in school… whats even better with my current position is that i can apply what i learn to provide more information to my officers and commanders, and hopefully save lives… i figure that justifies my sudden choice to this

(8:57:06 PM) bradass87: im more concerned about making sure that everyone, soldiers, marines, contractor, even the local nationals, get home to their families

On his intent to enter politics:

(8:25:13 PM) bradass87: my plan is pretty simple but vague… get credentials, nice ones… ones that make it difficult for really creepy conservative people to attack… then jump into politics

On how he viewed the military:

(10:10:15 PM) bradass87: i actually believe what the army tries to make itself out to be: a diverse place full of people defending the country… male, female, black, white, gay, straight, christian, jewish, asian, old or young, it doesnt matter to me; we all wear the same green uniform… but its still a male-dominated, christian-right, oppressive organization, with a few hidden jems of diversity

(10:40:49 PM) bradass87: sometimes i wish it were all black and white like the media and politicians present it… him, he’s the bad guy, oh and he, he’s the good guy… its all shades of blurry grey

Then the government reviewed portions as well. It had McNamara read sections on activism:

(8:30:52 PM) bradass87: worringly, “terrorists” are a form of political activist, however, they recruit young people with troubled lives (a sick family member, extremely poor upbringing, etc) offer them a monetary solution, take them into a camp, give them psychoactive drugs, psyhologically drug them for many months, give them an explosive jacket or rigged vehicle, give them heavy doses of uppers and send them on their way to try and kill themselves… if they go through with it (which is what the uppers are supposed to do)

(8:35:53 PM) bradass87: we try our best to keep it from being a tragedy, thats what all the infrastructure, schools, elections, and military training out there is for

On other views on the military:

(9:03:07 PM) bradass87: military is all f’d up… contracts with closed source developers with incompatible software… drives me NUTS

(9:07:52 PM) bradass87: but, luckily i use my DC contacts from Starbucks and get the word out to those higher up in the chain…

On how he viewed Guantanamo Bay:

(10:33:01 PM) bradass87: well, some of them are actually pretty dangerous indeed… some of them weren’t dangerous before, but are now in fact dangerous because we imprisoned them for so long (don’t quote me on that, for the love of my career), and others might, with a little more than an apology would easily fit back into society… who’s who… worryingly, you cant really tell

(10:38:59 PM) bradass87: some of them are indeed dangerous, and those that have left have, and i as a liberal and someone against gitmo will tell you… yes, many of those previously released, even though innocent before, are quickly recruited as leading figures for new wings of extremist groups

And on sending a link:

(11:26:35 PM) bradass87: im working on an Incident Tracker for my unit, to update the current one we have from the unit’s last deployment

He then sent this (now-broken) link: http://www.designerbrad.com/its/index.php

Former Guantanamo Bay prosecutor Col. Morris Davis (retired) is now on the stand. The defense will lay a foundation tonight in an effort to qualify Davis as an expert, which the government contests.