Above Photo: JESSICA RINALDI/GLOBE STAFF. Students say they will not leave the Bernstein-Marcus Administrative Center until their demands are addressed.

WALTHAM — Hundreds of students at Brandeis University have occupied the administration building that includes the president’s office since Friday, and they vow not to leave until the interim president, Lisa M. Lynch, promises to address their demands pertaining to diversity, including the hiring of additional black faculty and counselors.

#ConcernedStudents2015, as the group calls itself, started its round-the-clock occupation of the Bernstein-Marcus Administrative Center after Lynch failed to address 13 concerns listed in a letter sent to her on Thursday.

Lynch met with students Friday after they started to occupy the building, but she did not have a plan to address their concerns, students said.

“To hear ‘I’m trying’ and seeing no result is draining,” said William Jones, 20, a sophomore from New York. “It’s a way of mollifying our demands.”

“It had to come to students putting their health, their well-being, on the line to request that the administration live up to its mission,” Nyah Macklin, 21, student body president, said on campus Sunday. “I don’t think the demands are incredibly unachievable.”

The students are calling for an increase in the number of full-time black faculty in all departments to 10 percent, curriculum that would increase racial awareness, annual diversity workshops for faculty, more black school counselors and students, and an office that would investigate student complaints against faculty and staff, among other things.

On Sunday, a university spokesman said the demands are being reviewed.

“We have told the students we will give their letter careful consideration,” said Bill Schaller, who declined to comment further.

Signs reading “We will not be moved,” “Uplifting the most marginalized uplifts us all,” and “Black faculty at Brandeis is only 1 percent, we demand more” hung from the entrance. “#Ford Hall 2015” signs hung on buildings throughout the campus. 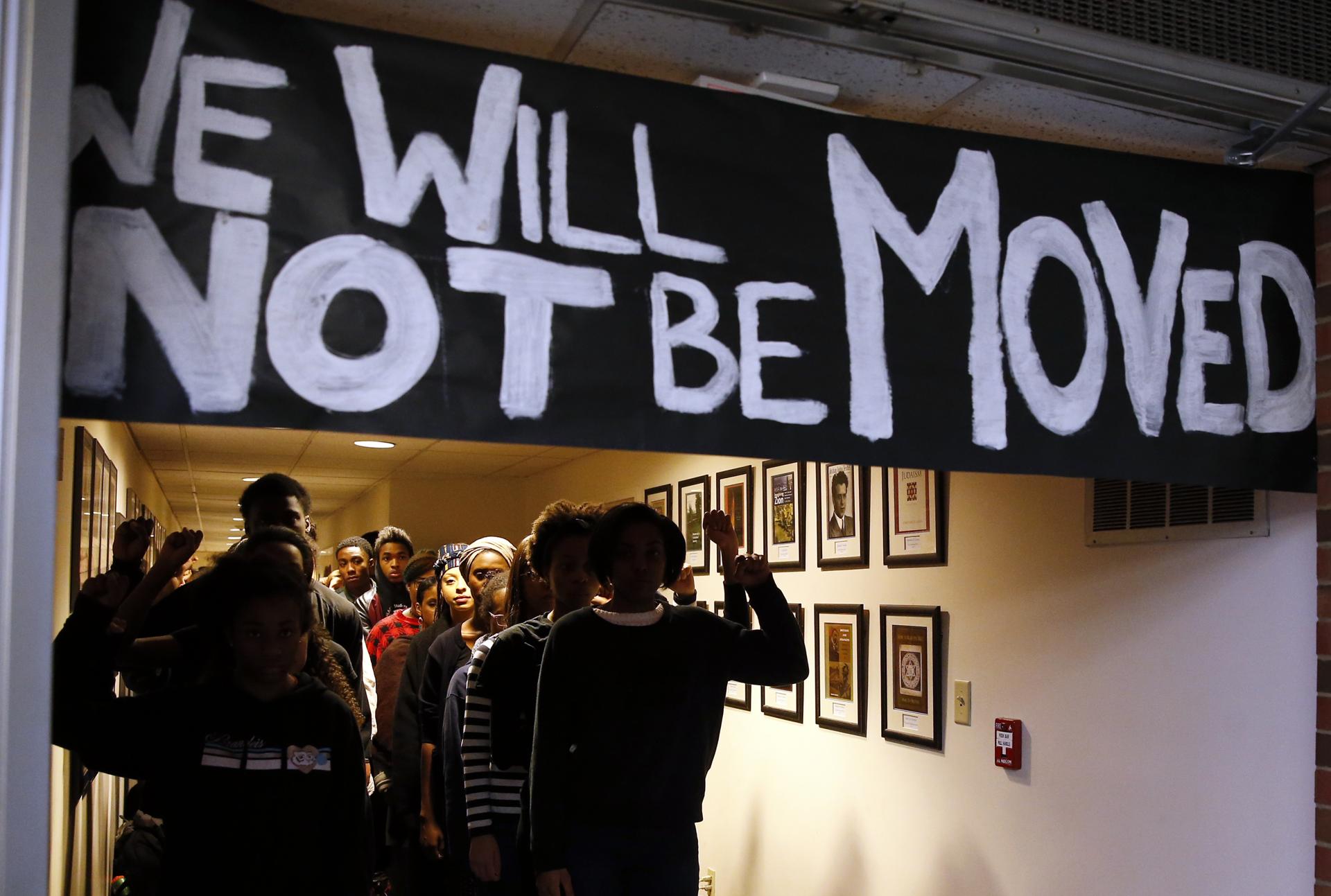 A banner hung in the hallway being occupied by students.

Black, white, Asian, and Hispanic students sat on the floor of the administration building’s hallway, many of them drawing signs. Supporters brought the group food, water, and other supplies.

The protest has drawn support from other student groups, such as the Asian American student organization, and the African and Afro-American Studies Department.

“As a department born out of student protest, we believe it is our intellectual and moral obligation to support our students in their struggle to transform Brandeis into a truly 21st century university,” a statement posted to the department’s Facebook page read.

Macklin said Brandeis students were inspired by similar protests launched at colleges across the country, most notably at the University of Missouri, to address racial grievances on campus.

Jones said that since he began attending the university he has often been asked how he managed to get into the school — the questioner’s assumption being that he was accepted through an affirmative action program. And as a politics major, he said, he is often asked to speak on the views of President Obama, or others think that because of his race he can be a “testament for anything that affects the black community.”

There was also an incident in which a black student was discouraged from discussing race during a class outside of the Afro and African-American Studies Department.

“When you’re in a class and you’re trying to interject your identity, you’re told you should take an African-American class if you want to talk about race,” Macklin said. “It’s incredibly difficult to operate in these spaces.”

Relations on campus were particularly tense in December and earlier this year after student Khadijah Lynch tweeted that she had “no sympathy” for two New York City police officers who were shot to death as they sat in their patrol car.

At the time, Lynch told the Globe that her messages had been taken out of context and said the comments reflected a raw anger and frustration after the police-involved shooting death of a 12-year-old black boy in Cleveland and grand jury decisions in Missouri and New York to not indict white police officers in the deaths of unarmed black men.

The university’s president at the time, Frederick M. Lawrence, called for “discussions about complex and charged issues in a climate of mutual respect and civility.”

But Jones said there is only one black counselor in the school’s Psychological Counseling Center, which makes it hard for students to find someone to whom they feel comfortable speaking about issues involving race.

The university, which had 3,729 undergraduate students in 2014, has a student population that is 48 percent white, 5 percent black, 6 percent Hispanic, and 13 percent Asian, according to the its website.

Founded in 1948, Brandeis was created in defiance of anti-Semitism, according to its website.