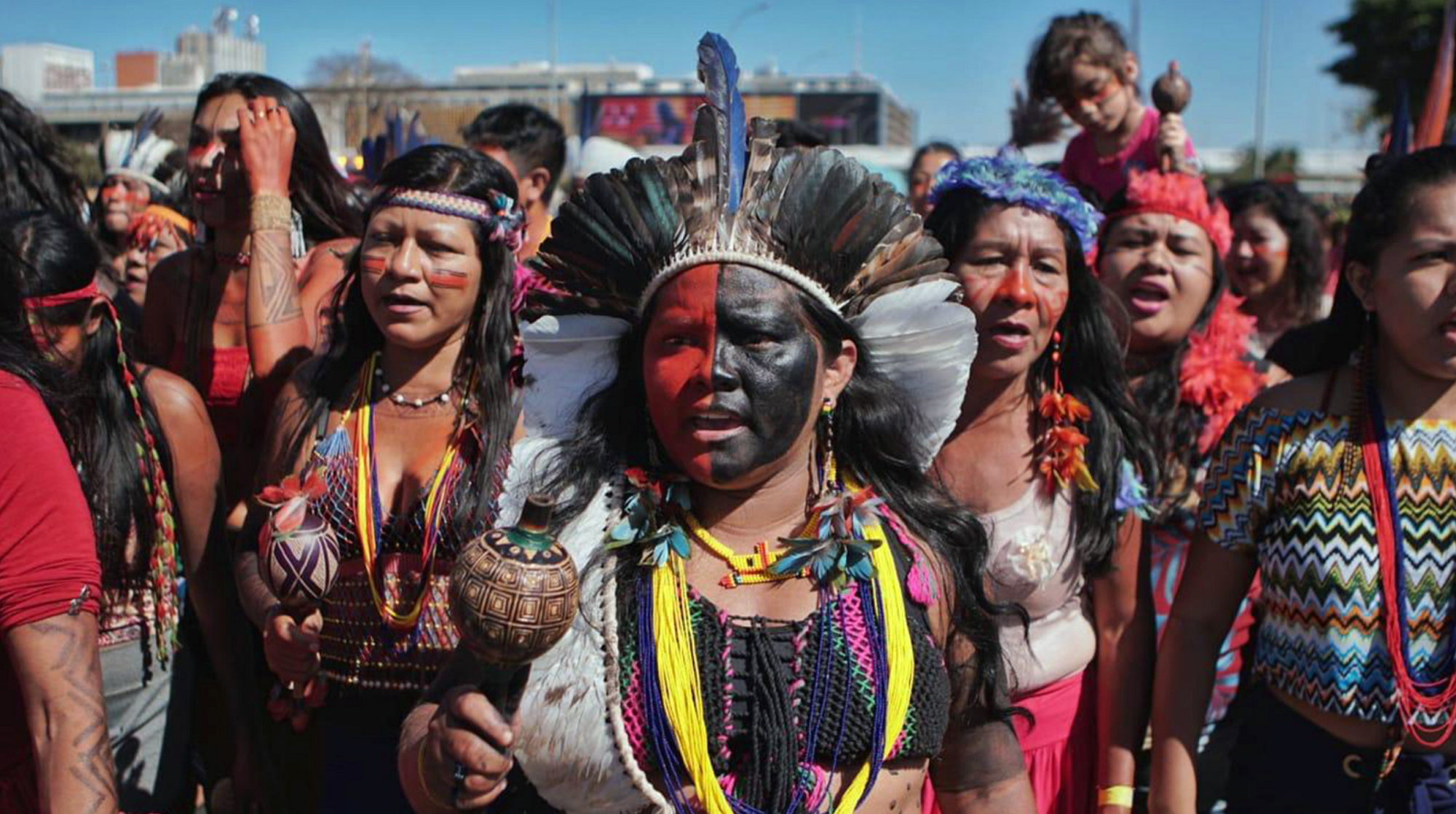 In a great demonstration of feminine unity and strength as part of the indigenous movement across the Amazon, thousands of indigenous women have mobilized in Brazil’s capital city since yesterday as part of the country’s first Indigenous Women’s March. Carrying banners with the slogan “Territory: our body, our spirit,”, women have taken to the streets to make their voices heard and to denounce the policies of Brazil’s far-right president Bolsonaro, which have set the stage for escalating violations of indigenous rights, racism, violence and the most alarming Amazon deforestation rates in recent memory.

Marching side by side with women from over 110 ethnic groups in Brazil, indigenous women leaders from other regions of the Amazon have also joined in the mobilization to express their solidarity and to share their struggles in defence of their ancestral rainforest homelands, including Waorani leader Nemonte Nenquimo and Kofan leader Alexandra Narvaez from Ecuador. Both have led key victories against oil and mining interests in the Ecuadorian Amazon, setting historic precedents for indigenous rights and the rights of nature.

“Today, as women, we are on the frontlines – it is no longer only the men! We, women, are the ones who are taking on this fight for our territory because our territory is our life, it is our body. Joining the women here in Brazil is an incredible experience: we are standing together, we are no longer alone. As women, we are uniting to protect our territories from destruction and we are demanding that the governments respect our rights”, declared Kofan leader Alexandra Narvaez, whose community of Sinangoe won a historic victory against gold mining last year, protecting 79,000 acres of their ancestral rainforest territory at the headwaters of one of the Ecuadorian Amazon’s most important rivers.

“I feel a lot of strength from the women here”, affirmed Nemonte Nenquimo, Waorani leader and President of the regional Waorani political organization of Pastaza, CONCONAWEP, who led her people’s struggle and triumph against the Ecuadorian government, recently winning a landmark court ruling protecting half a million acres of rainforest from oil drilling. “As women, we share the same vision, we want to continue organizing and uniting so that our cultures, our ancestral knowledge and our right to life be respected. We are fighting in the face of the enormous threats to our lands and lives. Around the world, the governments are trying to kill us. They want to exploit our lands with no regard for us as human beings. Yet we are the guardians and owners of our territories, which we have cared for and protected for thousands of years. We want to protect our land for the future generations. We want our forest to be free from contamination, free from destruction.”

While extractive projects continue to threaten indigenous territories across the Amazon region, the rise to power of Brazil’s President Jair Bolsonaro signaled an even more ominous turn of events for the fate of our world’s most important rainforest with huge stakes for our planet and climate. Since the start of the year, Amazon deforestation has been accelerating towards an unrecoverable ‘tipping point’, while invasions of indigenous territories by land grabbers and killings of indigenous leaders have spiked. Yet Brazil’s indigenous women are standing firm in their resistance. “We don’t have to accept the destruction of our rights,” said indigenous leader Sônia Guajajara. “Submission is not culture. We are here to demystify the idea that indigenous women do not participate in this struggle and to demonstrate that we are prepared to occupy any space,” explained Guajajara.

The women’s march in Brazil marks yet another step forward for women-led action, organizing and solutions for Amazon protection. Across the region, indigenous women are spearheading actions and strategies on the frontlines of their communities’ struggles, and asserting their role as indispensable actors and leaders in resistance movements against extractivism. “We are building alliances as women across nations and countries in order to fight against the governments”, says Waorani leader Nemonte Nenquimo. “We are talking about the importance of our struggle for the future generations and how we want to organize and lead our people as women. We are determined to protect our Mother Earth. She gives us everything we need to live.”