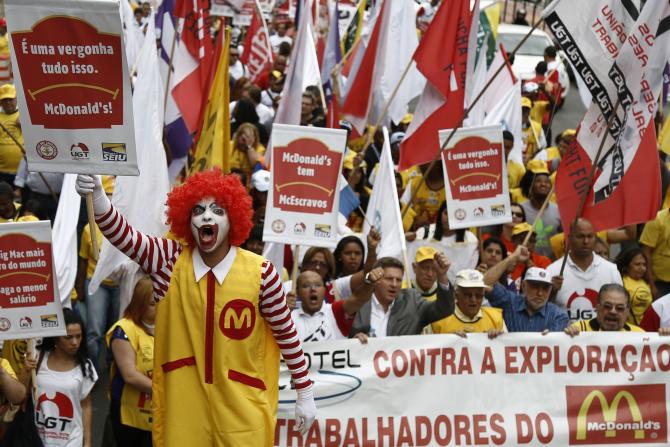 March 3, 2016 – Today a federal prosecutor in Brazil opened a criminal investigation (attached) into alleged “fiscal and economic crimes” by McDonald’s. The prosecutor’s office said it will look into suspected tax evasion and violations of Brazil’s franchise and competition laws. He issued an indictment against McDonald’s, which will require the company to appear before the federal prosecutor for a deposition and to turn over all documents related to the case.

This just broke in Brazil. It’s a criminal investigation into how McDonald’s does business and it could have major implications for how the company conducts its operations around the globe and could prompt similar investigations worldwide. It’s a huge development—the equivalent here in the States would be the Justice Department opening an investigation. If found guilty of tax dodging, fines and penalties could amount to more than $342 million. Anti-competition penalties could total 1% to 20% of the company’s gross profits, plus an additional 10% to 50% of the fine against the company to its CEO. Additional penalties include the company being forced to pay taxes up front rather than via quarterly payments; McDonald’s could be blocked from the use of banks in Brazil; and it could be compelled to restructure its Brazilian operation.

The Brazil announcement comes as authorities in Europe are investigating McDonald’s for widespread tax evasion and follows a European Commission antitrust complaint filed against the company by three Italian consumer groups.

You may remember Brazilian unions filed a complaint last summer and this is the government’s response. The petition by the unions alleged that Arcos: (1) has structured its operations to pay fewer taxes; (2) exercises excessive control over its franchisees; and (3) gains an illegal uncompetitive advantages through its real estate and leasing practice.

Here’s a Reuters story that mentions the August complaint