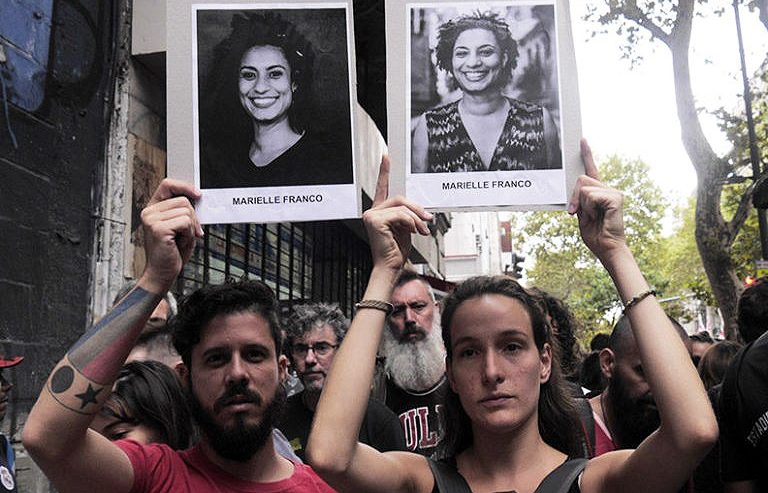 Brazil: The Indispensable Need For Resistance

The die is cast. There are no longer any polls that can be used to draw un provable results. The truth is that a fascist has come to the presidency of Brazil by a vote of millions. The fact is serious from any point of view, and not only for Brazilians, but this vote will undoubtedly have an unpredictable impact on the rest of the continent and beyond.

The Nazi Bolsonaro won by nearly a ten point advantage thanks to many factors that will have to be analyzed starting from this very moment. One of them, the fundamental one, is this insistence from many popular sectors of not taking into account that in the framework of these bourgeois democracies that they are absolutely controlled by the enemies of the peoples. To continue to insist on voluntarily competing in that racket is like putting your arm in the mouth of a hungry lion. Let’s see if we can convince ourselves that when they say “democracy” they are announcing precisely the exact opposite of what we imagine.

At this point in time, after a new test of playing the game on the enemy’s field, with Lula, a popular leader handcuffed and censored, it would have been better to withdraw from the competition all together, denouncing it and explaining that in those conditions the fraud was consummated. Bolsonaro would have won anyway but at least the political fact would have been made to show that those institutions that call themselves “sovereign” are not, and instead have become the great trap of authentic democracy; popular democracy, participatory and arising from the grassroots and not from campaigns of mass intoxication.

There are several elements that paved the way for this failed path like the repeated tricks of the hegemonic media; the liars and makers of scenarios as fictitious as they are effective that were drilled into the brains of many people with zero political consciousness.

To this must be added the “imprisoned Lula” effect, which was useful for the opposition in removing him from the scene, with charges of corruption never proven. Not only that, but then working to humiliate him and diminish his charisma so as to not influence the results.

Then there will have to be computed other unavoidable elements that have masked the victory of those who have carried out an electoral campaign loaded with threats to the popular sectors and who have opened the door to sectarian violence, very similar to that experienced by Germany in the brutal days of Adolf Hitler. In this regard, we must not forget just how big a role that the reactionary evangelical Pentecostal churches played in turning Bolsonaro into the “angel of salvation” in their sermons while characterizing  Lula and his followers as the “demons” to be destroyed.

Another issue to bear in mind is how the anti-PT vote has played out, as a result of many lies, but also the acts of corruption in which several of its leaders undoubtedly fell into. In this aspect, the onslaught of the right was fed by this reality. To continue denying it at this point is of no use. And in no way does this take away from the many positive aspects of the PT, especially in Lula’s time.

Now, as Joao Pedro Stedile of the MST said, and as Fernando Haddad himself repeated on his post-election night speech; the only great path left to the Brazilian people is that of resistance. In order to do this, it is useless to become discouraged or fall into depressive wells no matter how hard this blow is received.

It is important to emphasize the role that many in Brazil have played all these years. There has been the constant and militant Landless and the Homeless movements, also the recent strength given to the struggle by women and sexual dissidents, who have not stopped fighting for a single day, many times submerged in the impotence of not being heard by those who had the obligation to do so. There have been thousands who have confronted hit men, millionaire landowners, Mother Earth’s predators, xenophobes, racists and more. For them, talking about resistance is commonplace and surely, because they are part of those who have threatened Bolsonario in the electoral campaign, they will have to continue to be in the front line of the battle against the plundering and oppressive bourgeoisie.

The issue is to not to leave them out there by themselves, as happened in part during several periods of the Temer government. They are part of a vanguard of popular unity that will have to be built step by step from this point on, including incorporating the Brazilian trade union movement.

It is essential there and in other countries that suffer right-wing tyrannies that their respective fuhrers (with Bolsonaro at the head) do not find governance easy, there must be a wearing down of their authoritarian mandate, rejecting their bravado and denouncing their brutalities locally and internationally. Fascism “made in Brazil” cannot be given the slightest advantage in these four years mandate. In the name of Marielle Franco, for Moa and for all the young people who have fallen from the hands of  barbarity of Bolsonaro’s “black shirts”.