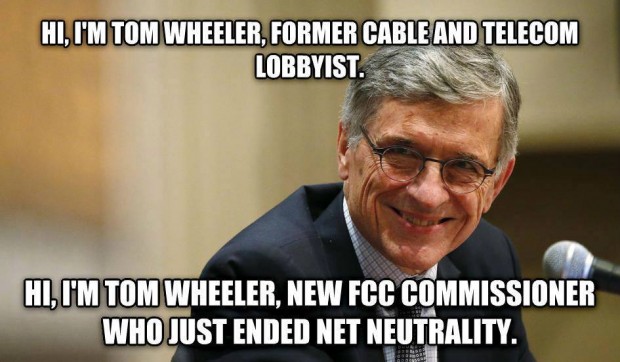 Internet activists are outraged by so-called “hybrid” proposal reported by Wall Street Journal that would allow for fast lanes and slow lanes.

WASHINGTON — Today, digital rights group Fight for the Future — best known for their pivotal role in major Internet protests like the SOPA Blackout and the Internet Slowdown — electronically delivered more than 75,000 signatures to President Barack Obama calling for the White House to publicly support full Title II reclassification and demote FCC Chairman Tom Wheeler for failing to do his job protecting the public’s access to a free and open Internet.

The delivery came just hours after the Wall Street Journal reported that Wheeler is close to finalizing a net neutrality proposal that would explicitly allow for Internet fast lanes and slow lanes, despite the fact that the FCC has received more than 3.7 million public comments opposing the fast lanes, overwhelmingly in support of banning so-called “paid prioritization” through the use of Title II reclassification.

“The Internet will never accept this sham proposal — it’s a middle finger to the American public and Internet users around the world,” said Holmes Wilson, co-founder of Fight for the Future, “Four million people came out opposing fast lanes, and then the FCC proposes fastlanes. It’s an outrage.”

“President Obama risks becoming the poster child for modern corruption. He appointed a former cable industry lobbyist to chair the FCC who has been doing the Cable industry’s bidding,” said FFTF’s other co-founder Tiffiniy Cheng, “If the FCC goes with the proposal detailed in the Wall Street Journal and fails to protect the most basic principles of the open Internet, that failure rests with the Obama administration. ”

Following today’s petition delivery calling for Wheeler’s removal from the FCC Chairmanship, Fight for the Future announced plans for a series of escalating actions targeting both the White House and the FCC.

The group is currently running a campaign at CallTheFCC.com, which allows Internet users to enter their phone number and call a random top-level employee at the FCC. The page has already driven more than 10,000 phone calls to the FCC, and more than 700 committed activists have signed up to call the FCC every day from now until they announce their net neutrality decision.

Fight for the Future and other groups are also planning Protest at the White House on Thursday, November 6th. Inspired by massive protests against a proposed Internet Tax in Hungary, the organizers are calling for participants to hold their phones aloft as a symbol of protest against the gutting of Internet freedom.

“We’re just getting started — the public is outraged and our actions will reflect that,” added Evan Greer, FFTF’s Campaign Director, “If President Obama and Tom Wheeler think they can fool the Internet public into accepting a fake proposal that destroys net neutrality, they are sorely mistaken, and with elections coming up, their party may pay the ultimate political price.”