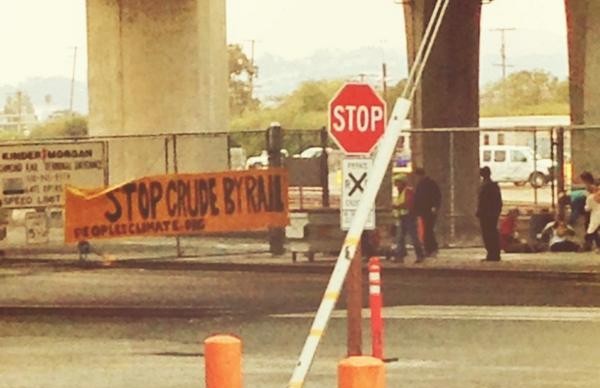 [Richmond, CA] Today more than a dozen Bay Area citizens chained themselves to a gate at the Kinder Morgan rail terminal in Richmond to stop operations. The citizens risked arrest to protest mile-long oil trains that threaten the safety of area residents and are a massive new source of air and carbon pollution in the region.

Among the demonstrators were residents of Richmond, Rodeo, Martinez, and Benicia, all towns that currently see dangerous oil trains moving through residential areas. Earlier this year the regional air quality agency, known as the Bay Area Air Quality Management District, changed an existing permit to allow oil trains at the rail facility. Demonstrators contend that the agency broke the law when it modified the existing permit without additional environmental and safety review.

On Friday the San Francisco Superior Court will hold a hearing on a lawsuit filed by groups challenging the legality of the permit change and asking for a halt to oil train operations at the facility.

“I work with Richmond residents who already struggle with cancer, asthma and other devastating health impacts of pollution. Now they are living with bomb-trains full of explosive Bakken crude oil driving through their neighborhoods. By allowing this to happen, BAAQMD is failing to protect us and choosing Kinder Morgan’s profits over our safety,” said Megan Zapanta, Asian Pacific Environmental Network Richmond Community Organizer.

“People in Richmond are angry that the Air District, who are supposed to protect us, instead has put our community at catastrophic risk along with all the uprail communities. This irresponsible behavior must be stopped NOW!” said Andres Soto, organizer with Communities for a Better Environment.

“It’s unacceptable and illegal that the Air District allowed Kinder Morgan to bring explosive Bakken oil by rail from North Dakota without going through the processes established by state law to protect air quality and the safety of families in Pittsburg, Martinez, Crockett, Rodeo, Benicia, and Richmond. We demand that all operations related to oil by rail at Kinder Morgan stop immediately,” says Pamela Arauz, on behalf of Bay Area Refinery Corridor Coalition.

“The law in the State of California requires public agencies like the Air District to inform the public of projects like the Kinder Morgan Bomb Train operation.  Not only that, the law requires an environmental review and public input into the process of issuing permits.  The Air District broke the law when they secretly approved this dangerous project,” stated Denny Larson of Global Community Monitor.

“As the Bay Area Air District and other government agencies are failing to protect the health and lives of communities from the reckless shipments of crude oil by rail, the people are taking action to protect our communities,” said Bradley Angel, Executive Director of Greenaction for Health and Environmental Justice.

“The Air District took a reckless, illegal shortcut that puts our families at risk. We’ve seen what happens when one of these trains derails and catches fire, we can’t let that happen here,” said Ethan Buckner, US organizer with ForestEthics.

“Climate disruption is bearing down on us even faster because of the extreme extraction of tar sands and shale oil. With Bomb Trains carrying millions of gallons of that dangerous crude rolling on Bay Area rails, all of our lives are on the line. Instead of the alarming dead-end expansion of the fossil fuel industry we need a rapid transition to renewable energy now,” saidShoshana Wechsler of the Sunflower Alliance.

“To be sure, we take the oil refineries’ contempt for fenceline communities for granted. But frankly, it was shocking to see how covertly BAAQMD threw our public health under the bus,” said Nancy Rieser, Co-founder, Crockett-Rodeo United to Defend the Environment (C.R.U.D.E.)

Oil tankers lined up, kept out by #stopoilbyrail blockade in Richmond, Ca pic.twitter.com/vcaouM5zvQ