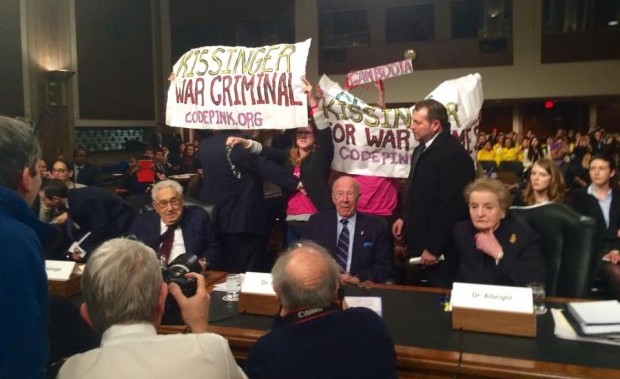 Washington, DC –– On Thursday, January 29, CODEPINK protesters spoke out during Senate Armed Services Committee hearing attempting to perform a citizens’ arrest on Henry Kissinger. Holding handcuffs and large signs that read: KISSINGER: WAR CRIMINAL and ARREST KISSINGER FOR WAR CRIMES, activists read aloud a citizens’ arrest [pasted below]. In response, Senator John McCain (R-AZ), Chairman of the Committee, called the human rights activists “lowlife scum” and said it was “the most disgraceful and despicable demonstration he had ever seen.”

“CODEPINK is really proud of our action in the Senate today, speaking out on behalf of the people of Indochina, China, East Timor and peace-loving people everywhere,” said CODEPINK co-founder Medea Benjamin, “Henry Kissinger is responsible for the deaths of millions. He’s a murderer, a liar, a crook, and a thug, and should be tried at the Hague.”

“I chose to speak out during the Senate Arms Committee because I’m appalled that the Senate would bring in a war criminal to testify about ‘American leadership’ when the only things Henry Kissinger and Madeline Albright have shown leadership in is wreaking destruction upon other countries and murdering countless innocent civilians,” said 26-year-old CODEPINK National Coordinator Alli McCracken. “Is that the leadership we want to uphold as a nation and use to determine our current and future foreign policies? We need to stop rehashing these tired old war criminals and come up with a new foreign policy based on diplomacy and compassion –– two things Kissinger knows nothing about.”

“Henry Kissinger is one of many representatives of the culture of impunity which still dominates American leaders’ approach to foreign policy. While he has been continually criticized by activists for his orchestration of or support for egregious crimes, he is regarded as a bulwark for global diplomacy by those who walk the hallowed halls of congress. His true legacy is that of destruction. He is the great American villain, Kissinger’s agent orange in Vietnam is  Bush’s Depleted Uranium in Iraq, the time to end impunity is now,” said Anna Kaminski, a CODEPINK organizer.

The Citizens’ Arrest warrant denounced Henry Kissinger for complicity in the bombings in Vietnam, Cambodia and Laos; the overthrow of the Allende government in Chile and the Indonesian invasion of East Timor. “Democracies should hold their officials accountable for their acts. That’s why we demand that Kissinger be arrested for crimes against humanity and tried at the Hague,” the warrant concluded.

CODEPINK calls for the arrest of Henry Kissinger for War Crimes

Vietnam: From 1969 through 1973, Kissinger, working for Richard Nixon, oversaw the slaughter in Vietnam, Cambodia and Laos, which led to the deaths of millions of people. Many thousands more died from the affects of massive doses of Agent  Orange and from unexploded US bombs that cover the countryside.

Chile: Henry Kissinger was one of the principle architects of the coup in Chile on September 11, 1973, a coup that overthrew the democratically elected government of Salvador Allende. Sixteen years of repression, torture and death followed under the rule of Kissinger’s friend, the fascist Augusto Pinochet.

East Timor: In 1975, while working for President Gerald Ford, Kissinger pre-approved the Indonesian dictator Suharto’s bloody invasion of the small island of East Timor. This illegal act of aggression was carried out with weapons furnished by the US. By the time the Indonesian occupation finally ended in 1999, 200,000 Timorese – 30 percent of the population – had been wiped out.

This is Kissinger’s legacy. Death. Destruction. Suffering. Misery. Dictatorships. His is a murderer, a liar, a crook, a thug.

Democracies should hold their officials accountable for their acts. That’s why we demand that Kissinger be arrested for crimes against humanity and tried at the Hague.