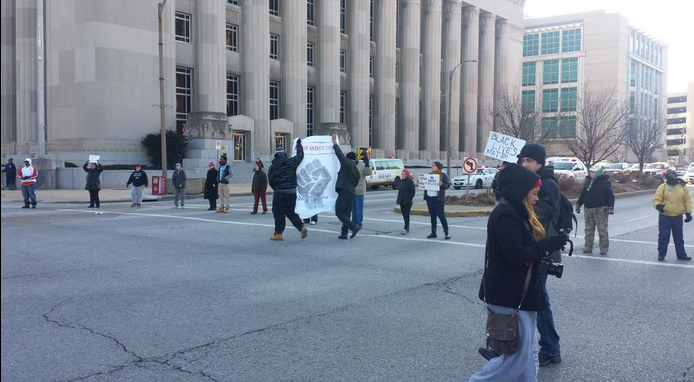 Twenty-five people in Ferguson, Missouri,are occupying the St. Louis Police headquarters. In the meantime, SLPD are busy chasing around a diversion march on the streets. This comes as ongoing anti-police actions around the country have gained momentum, sparked by the most recent murders by police.

We have received a cry for help, that as mothers, grandmothers, fathers, grandfathers, brothers and sisters we can NO LONGER IGNORE.

In response to this dispatch, we intend to evict injustice and blight, by occupying St. Louis Police headquarters on December 31st, 2014, at 11am. The decision to reclaim our police department is the result of willful neglect and violence on behalf of the department toward the community, which they are bound, by oath, to protect and serve. Violations include: Committing crimes against humanity, by ending the life of men, women, and children, and then labeling these executions as “justified” without regard for your humanity, and without thorough investigation. Hiring officers, who are unfit to wear a badge, like Randy Hayes, a known animal torturer, and Jason Flannery, who publicly declared he wanted to “shoot Muslims.” Both these men shot and killed two members of our community and have not been held accountable for these egregious actions, but rather have been protected behind a blue shield. Despite thousands marching in the streets; despite our community having to sue our own police department to stop the use of tear gas and rubber bullets; despite urgent demands for broad and substantive reforms, our cries have been ignored. For all these reasons, we intend to occupy St. Louis Police Headquarters as part of our New Year’s resolution to take back our Justice System, and in doing so reclaiming the promise of our future.

Signed: We the People

Details and demands can be found at #Occupythepolice or #Reclaimthepolice

To watch the action via livestream:

[Bay Area Intifada disclaimer: We are concerned about the reformist nature of the protesters’ demands.  In addition, one demand–the one which specifically requests nonviolent protesters be released and by negation leaves more militant protesters abandoned in state custody–is dangerous.]

1)      Immediate meeting with the Dotson, Slay or Lewis Reed.

2)      Firing of officers Hayes and Flannery

3)      Clear and transparent protocol when a person dies in police custody including:

A) Immediate medical attention for victims

B)  Immediate release of the officers name

C)  Appointment of special prosecutor for ALL deaths that occur in police custody.

6)      Creation of a diverse citizen review board with subpoena power. The board will be appointed by community, not politicians and will be a reflection of victims most subjected to police violence.

7)      Seven day release of all information regarding police shootings including transparent release of unedited videos and audios.

8)      A substantive plan with implementation dates for mandatory diversity training

9)      Restoration of the residency requirement.

10)   Screening that prevents officers fired from other departments to be hired by St. Louis Police Department.

11)  Implementation of Youth Summer Program that creates opportunities for young people to serve in community.