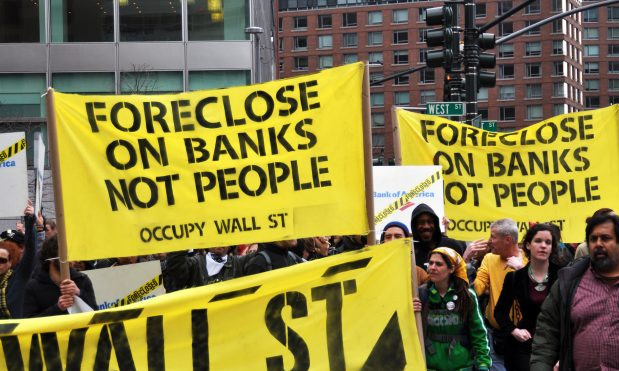 Above Photo: by Michael Fleshman (CC-BY-SA)

How can we make sense of the organizing coming out of today’s social change and resistance movements?

In a new article coming out in the Fordham Urban Law Journal, Professor Michael Haber connects many of today’s most important movements—from post-Occupy community organizing to the rise of the worker co-op movement to parts of the Movement for Black Lives—by looking at how activists’ growing understanding of the non-profit industrial complex has led to the creation of a new framework for social change practice, what he calls the community counter-institution.

Community counter-institutions have grown out of a decades-long tradition of anti-authoritarian activism, one with roots in women-of-color feminism and the service models of the Black Panther Party of the late 1960s and early 1970s, growing through the radical pacifist, anti-nuclear, LGBTQIA, and environmental movements of the 1970s and 1980s, continuing through the anti-globalization movement of the late 1990s and early 2000s, and getting perhaps its greatest boost through the Occupy Movement in the early 2010s. The article traces this history, focusing on how activists in recent years have come to develop an alternative model for community-driven activism, one that breaks from the dominant non-profit forms of community organizing, service provision, and community economic development.

The article, CED After #OWS: From Community Economic Development to Anti-Authoritarian Community Counter-Institutions, describes how community counter-institutions have grown out of this tradition of anti-authoritarian activism, making three shifts away from conventional non-profit practices:

In these bleak times, clear visions for community-driven social change activism, and thoughtful analyses of our current models are essential. Haber spells out challenges that activists and organizers to overcome, analyzing a wide range of projects including the Common Ground Collective, Hands Up United, Mayday Space, Occupy Sandy, and the Sylvia Rivera Law Project, and is full of hundreds of footnotes for further reading.