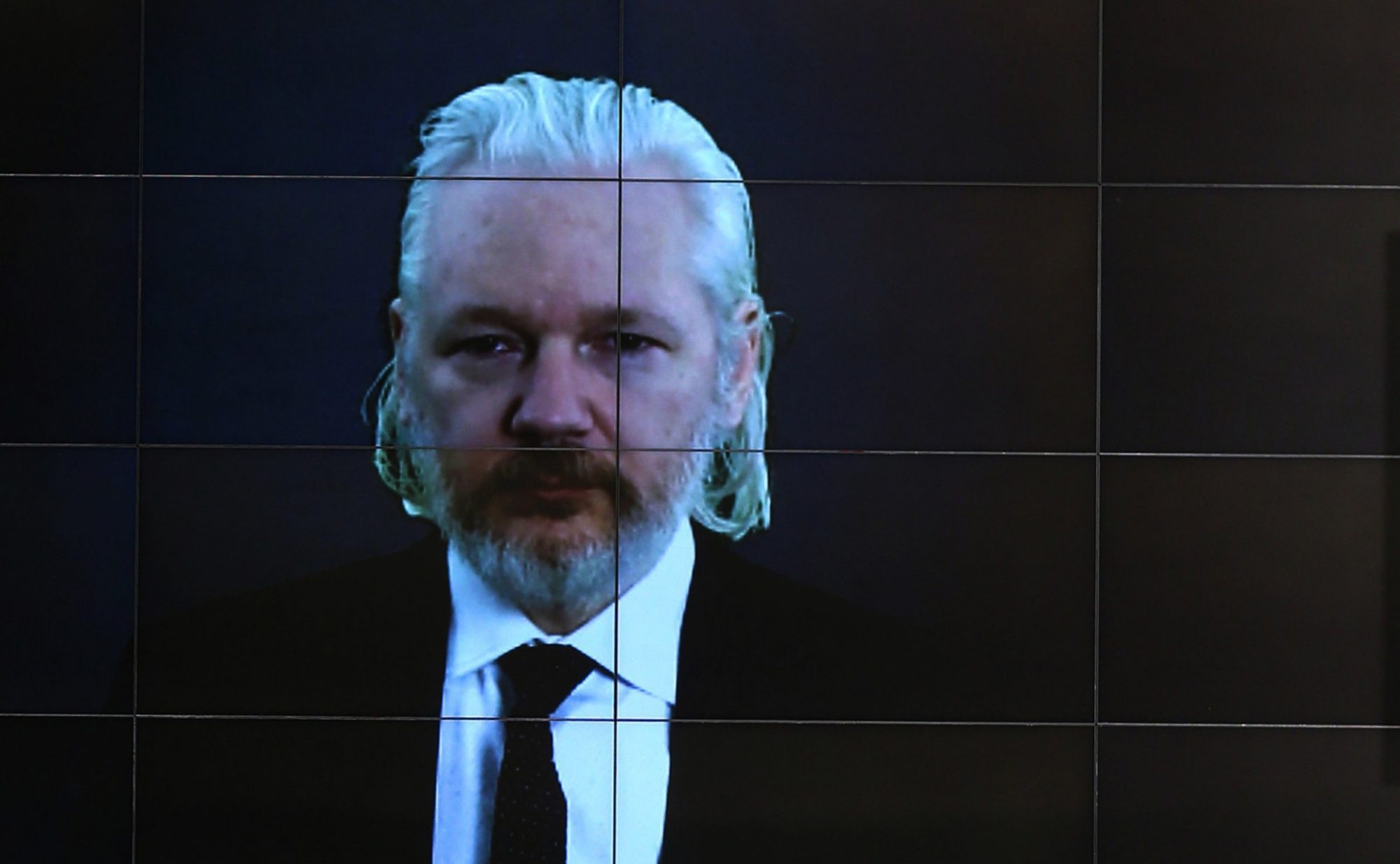 Breaking: Possible Handover Of Assange To UK May Be Imminent

ACTION ALERT: This is the time to take action in support of Julian Assange. Here is what you can do:

Spread the word about the urgent international online meeting today. It will take place at Unity4J.com at from 7:00 pm to 10:00 pm Eastern.

Call the Ecuadorean Embassy and tell them to honor their commitment to provide refuge to Assange and to stop the isolation of him. He needs to meet with friends, have access to internet and receive medical care. Click here for information about the Emabassy closest to you.

Organize an action in your community. It can be a few people holding signs in a high-traffic area, taking photos and sharing them via Twitter (#Unity4J, #FreeAssange, @wikileaks, @Lenin)

What happens in a world without Julian Assange?

It seems we may be in the unthinkable position of facing such a reality, after WikiLeaks Tweeted regarding the recent statement of Margarita Simonyan, RT’s Editor-in-chief. Her message read (In English): “My sources tell me that Julian Assange will be handed over to the UK in the next weeks or days. Like never before I wish that my sources are wrong’.’

Editor-in-chief of RT: “My sources tell me that @JulianAssange will be handed over to the #UK in the next weeks or days. Like never before I wish that my sources are wrong” https://t.co/rvN3ne3ifd

An exceptionally brief article published by Russian Insider documented Simonyan’s foreboding Tweet, indicating that her statement seemed especially serious in light of the quality of her sources.

Russian media is hardly the first source of dire warnings regarding Assange’s safety in recent weeks. Just Days ago, the World Socialist Website related: “The London Times reported July 15 on secret talks between the British and Ecuadorian governments. They are apparently intending to expel WikiLeaks editor Julian Assange from the Ecuadorian embassy in London, where he has enjoyed political asylum for six years. The article said the talks were “an attempt to remove Assange from the embassy,” and they were being run at the highest levels of government. The Secretary of State for Foreign Affairs, Sir Alan Duncan, is personally involved.”

Ecuador is preparing to evict and turn #JulianAssange over to British police. They have confirmed they are in negotiations with the British to “resolve” his fate. https://t.co/oKxSdcf8LG

“The failure on the part of establishment media to defend Julian Assange, who has been trapped in the Ecuadorean Embassy in London since 2012, has been denied communication with the outside world since March and appears to be facing imminent expulsion and arrest, is astonishing. The extradition of the publisher—the maniacal goal of the U.S. government—would set a legal precedent that would criminalize any journalistic oversight or investigation of the corporate state. It would turn leaks and whistleblowing into treason. It would shroud in total secrecy the actions of the ruling global elites.”

As described by Hedges, the Western legacy press has become analogous to the attack dogs of the establishment, especially since the 2016 US Presidential election cycle, becoming almost rabid following the loss of Clinton to Trump. Their predatory focus on Assange – as opposed to their defense of his right to publish as a journalist – has astounded many and forced the public to reconcile with the true face of the media as state-sanctioned propaganda.

As noted by many independent media outlets in the months since Assange’s solitary confinement was enforced by the Ecuadorian government, his sanctuary in the embassy has mutated – apparently irrevocably – from a refuge to a prison cell.

A hot afternoon outside the Ecuadorian Embassy in London standing in solidarity with #WikiLeaks editor Julian #Assange July 18th 2018 pic.twitter.com/rHilx2BgRh

Disobedient Media reported that Assange is being tortured according to UN rules on solitary confinement. Every day that his state-sanctioned isolation continues is a 24-hour period of cruel and unusual treatment that also breaches the Ecuadorian constitution. As noted by one of Assange’s legal representatives, international law is also on his side. However, it remains to be seen as to whether Ecuador, the UK, or the United States will respect international law.

Under the Presidency of Lenin Moreno, Ecuador has embraced a growing relationship with the US, including economic and military agreements. Less than a month ago, US Vice President Pence visited Ecuador as part of a tour of Latin American nations, with intense speculation surrounding the event in terms of its implications for Julian Assange’s asylum.

Telesur wrote of the meeting between Pence and Moreno: “The Center for Economic and Social Rights (CDES) in Ecuador has warned that United States Vice President Mike Pence’s visit to Ecuador ‘Seeks to align the country to U.S. influence: that is turn Ecuador into a territory of war, sign an aggressive free trade agreement, eliminate ‘irritating’ subjects like the Texaco (Chevron) case, and dismantle sovereign regional integration.’”

These developments, in light of Assange’s isolation, have caused escalating concern, while provoking a backlash across the planet against unelected United States military powers. These demonstrations of solidarity have ranged from vigils on the ground in front of the Ecuadorian embassy in London to petitions,  online vigils, works of art and pieces of incredible music. All of these works have illustrated silencing Assange is against the deep state’s interest.

Happy birthday Julian. I made something for ya. Acrylic and oil on masonite. @WLArtForce #FreeAssange @AssangeMrs pic.twitter.com/9MCLqp7jOI

Every act of brutality against him has and will increase solidarity with him on the ground at the embassy, online, and in the streets. Web-based vigils under the banner #Unity4J have brought together journalists, activists, and thinkers from around the globe ranging from progressives and socialists to conservatives, independents, and everything in between.

On the sixth anniversary of Assange’s entry into the Ecuadorian embassy in London, demonstrations of solidaritywere also held in locations including Sydney Australia, Bern Switzerland, Washington D.C., Sri Lanka, India, and Dublin Ireland, among others. At a rally in Sydney, award-winning documentary film-maker and journalist, delivered the following address:

If Assange is surrendered by the Ecuadorian government to the UK, it will no doubt provoke outrage and public demonstrations in his support. It will also suggest that his arrest may have been the impetus for the recent escalation in feigned neoMcCarthyist fervor. Some have suggested that the only recourse left to support Assange at this time may be civil disobedience.

As Julians life is in extreme danger right now from an Embassy asylum eviction & extradition to the US the priority is to act to prevent that.

Your actions to protect Julian will give him more comfort than a personal letter atm.#FreeAssange

Disobedient Media previously noted that Julian Assange has always stood up for those who are attacked by overt and covert actions of government, the military-industrial-apparatus and the lies of the corporate press.

We are hardly the first to point out that if his asylum were to be revoked in any way, dangerously inept intelligence agencies, especially the CIA, would continue to operate outside the purview of public vision. We would have lost an important public voice warning us of the dangers of artificial intelligence, and any pretense to an authentic free press. As outlets like The Guardian, The New York Times and The Washington Post have seemed only too eager to cannibalize the work of a journalist they also persecute, the public must understand that the implications of Assange’s asylum, if lost, would reach far beyond petty political outcomes.

Whistleblowers may be less likely to turn to outlets unable to secure their anonymity and advocate on their behalf, as we have seen in WikiLeaks’ actions towards alleged sources such as Chelsea Manning. The ultimate outcome of the loss of Julian Assange is too great to fully summarize.

However, CIA Whistleblower John Kiriakou spoke during the first Unity4J vigil, saying: “I feel like we’re heading into an international crisis if we turn our backs on Julian Assange.”

All legitimate press across the globe must advocate for a politically imprisoned journalist to be protected by the rule of international law which has found his confinement to be illegal, deserving of immediate cessation and recompense.

Disobedient Media will continue to report on this critical story as events unfold.