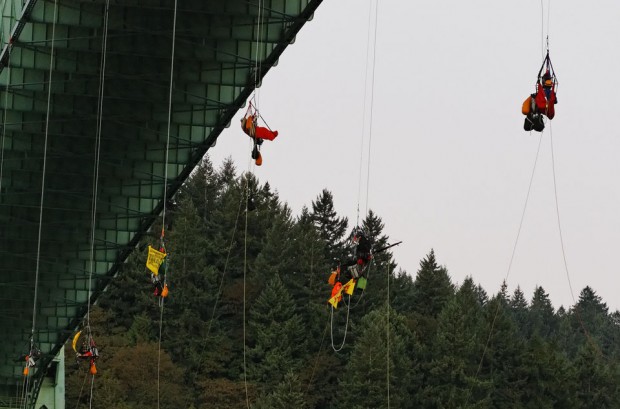 Above: Greenpeace activists rappel off the St Johns Bridge. They were joined by kayactivists in the Willamette river to protest Shell Oil’s drilling in the Arctic. Shell’s Fennica ship is being repaired at Vigor Industrial, on July 29, 2015. Mike Zacchino/Staff Portland Oregonian.

13 Greenpeace USA activists rappelled off the St. Johns Bridge over the Willamette River early Wednesday in an effort to block a Shell Oil Arctic icebreaker from leaving Portland.

7:10 a.m. UPDATE: As the sun rose, the 13 protesters dangling from the south deck of the bridge came into focus. Some carried signs, others had bright orange cones suspended beneath them. Along the bridge’s walkway, a Greenpeace USA protester was assigned to help each of the 13 dangling above the Willamette River.

Greenpeace activists attempt to stop Shell Oil Arctic icebreaker from leaving Portland At 1 a.m. Wednesday morning about 2 dozen Greenpeace USA protesters roped-up and are dangling from the deck of the St. Johns Bridge above the Willamette River. They hope to prevent the MSV Fennica, a Shell Oil icebreaker, from departing for the Arctic.

Portland police are parked at both ends of the St. Johns Bridge, and have set up roadblocks on some of the streets that access the bridge sidewalks. Cathedral Park remains open.

Greenpeace USA spokeswoman Cassady Sharp said the protesters rappelled off the bridge at 1 a.m. in anticipation of the Fennica departing at 5 a.m.

“That departure we’re hearing has been pushed back to 10 a.m.,” Sharp said.

Sharp said the protesters were equipped to last several days dangling in harnesses.

At Cathedral Park under the bridge’s east end, residents walked their dogs, jogged and walked, many snapping photographs of the protesters. On the water, protest sympathizers and protesters from other groups, paddled kayaks, some carrying orange warning flags. They too, Sharp said, were there to attempt to stop the ship from departing Portland.

“We are aware of the demonstration and are monitoring it in the area,” Sgt. Pete Simpson, Portland Police Bureau spokesman, said. “The St. Johns Bridge remains open to all vehicle traffic. Arrests may be possible as the day goes on. Our top priority is public safety, including that of the demonstrators and other people using the river.”

Activists Protesting Oil Drilling Demonstrators took to the river in kayaks and hung from ropes off the St. Johns bridge to protest shell drilling for oil in the Arctic region.

5: 30 a.m. UPDATE: Saying they have enough supplies to last for days, a group of 13 Greenpeace activists rappelled off the St. Johns Bridge over the Willamette River early Wednesday in an effort to block a Shell Oil Arctic icebreaker from leaving Portland.

According to Annie Leonard, executive director for Greenpeace USA, the group is trying to prevent passage of Shell’s MSV Fennica, which has been in a dry dock on Swan Island where a tear in the hull was being repaired.

“Every second we stop Shell counts,” Leonard said. “The brave climbers here in Portland are now what stand between Shell and Arctic oil. This is President Obama’s last chance to wake up and realize the disaster that could happen on his watch.”

The bridge remained open for traffic.

This story will be updated.