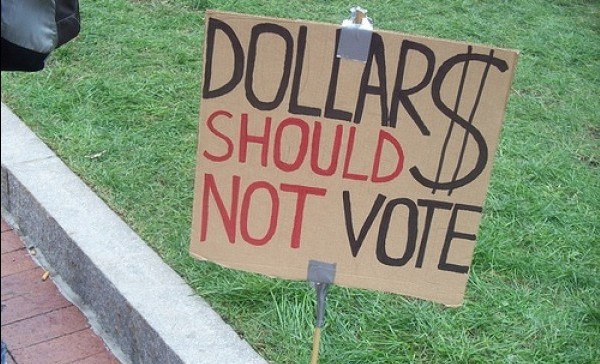 Bribery Has Never Been Easier As Total Spending Limits Are Removed

The ‘rule of money’ got much stronger today with the 5-4 ruling by the US Supreme court in McCutcheon v. FEC.  The Supreme Court overturned another foundational building block of the meager campaign finance rules that exist.

The Court struck down critical limits on the amount a wealthy individual can give to candidates, parties, and committees. Prior to McCutcheon v. FEC, a wealthy donor was limited to a cap of $123,200. Now, an individual donor can give whatever the can afford, for some that means millions.

For the 2013-2014 election cycle, Federal Election Commission rules stated that a donor can give no more than $123,200 to all political committees, with two sub-limits of $48,600 to candidates and $74,600 to political parties and political action committees. Those limits are no more.

Chief Justice Roberts, who wrote the majority opinion, makes clear in his opinion that the ruling and the case brought before the court in no way challenges the base contribution limits, which currently limit individual contributions to $2,600 per candidate, per election; to $32,400 to political party committees per year; and to $5,000 per PAC, per year. Justice Thomas, who wrote a separate opinion, urged the court to do away with those limits as well. The dissenting opinion was signed by Justice Stephen Breyer and joined by Elena Kagan, SoniaSotomayor and Ruth Bader Ginsburg

It is evident that it is going to take a constitutional amendment to correct the mistaken campaign finance decisions of the US Supreme Court. We like the agenda of Move to Amend on this issue.  On April 1 they reported some good news writing:

“Wisconsinites voted by huge majorities in thirteen communities in favor of  instructing Wisconsin’s Congressional delegation to propose and support — and the Wisconsin state legislature ratify — an amendment to the United States Constitution that clarifies three issues:

“1) that money is not speech; 2) that corporations are not entitled to the same rights as natural persons; and 3) that Congress and the states can limit election-related spending to ensure that all citizens, regardless of wealth, can express their views to one another and their government on a level playing field.”

We think that is the direction the country needs to go to end the rule of money and transfer power to the people.

Rapid response actions were planned in advance by Money Out/Voters In. They wrote before today’s decision:

“Never before has our political campaign system been as corrupted as now with unlimited corporate spending and dark money. Our democracy is eroding before us. But all over the country people are also fighting back and demanding change. 16 states called for a constitutional amendment to overturn Citizens United and related cases and the movement is growing.”

If you want to take part in rapid-response rallies, to stand up to take democracy and to end the rule of money. Find a rally near you here.

Read the decision below.