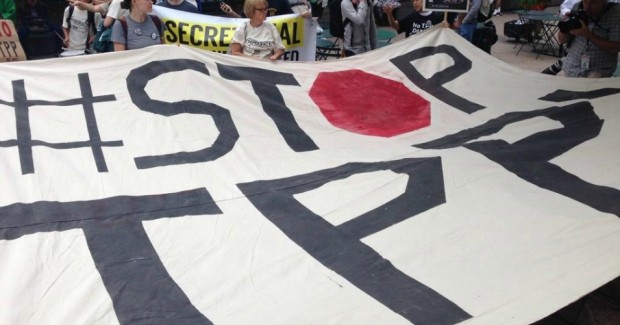 The text of the TPP is out. Here is a link to the full text.

Major actions are planned in Washington, DC from November 14 to 18.

If you are not already coming, join us in Washington, DC for this great convergence to oppose the TPP. The actions are co-sponsored by nearly 60 organizations. Sign up today and make plans to be there. This will be a great opportunity to show immediate opposition to this global corporate coup.

In the next few days, we will be getting analyses of the TPP from our allies and will be sharing them on our websites Flush The TPP and Popular Resistance. If you want to help spread the truth about the TPP, become a Media Mobilizer.

Writer Dave Johnson, who has been a TPP critic, puts out some of the things to look for in the TPP:

“Don’t be misdirected by what might have been in TPP or what we were afraid it might do; look at what is in it now and how what is in it will affect our jobs, pay and benefits, our environment, our relationship to the giant corporation and the billionaires and their immense and growing power, and our ability to self-govern and make laws and regulations that benefit and protect us.”

The release of the text does not start the 90 congressional review period as some corporate media outlets have reported. There are still many steps before Congress considers the TPP. It is likely to happen during February, March and April.

All of these steps must be completed before congressional review:

– The text will be reviewed by the public for 60 days before the President signs it.

– Federal advisory committees must provide written reports to the administration and Congress.

– The International Trade Commission report must be completed and submitted to the president and Congress not later than 105 days after the president signs the trade agreement.

– Once the agreement is signed, which may occur later than 90 days after the notice of intent to sign, the administration will have 60 days to provide Congress with a description of changes necessary to existing U.S. laws to bring the U.S. into compliance.

– At least 30 days before providing that description, the administration must submit to Congress a draft statement of administrative action proposed to implement the agreement and formally present Congress with a copy of the final agreement.

– The administration will have to work informally with the relevant Senate and House committees to reach agreement on legislative text for the TPP implementing bill, which also serves as the congressional approval bill. This will be done by the administration drafting the implementing bill text, which is then finalized through informal “mock mark-up” sessions with those committees.

– Following the mock mark-up process, there should be an agreed bill and a finalized statement of administrative action ready to be submitted to Congress.

That begins the clock for congressional action.

– Then the Senate committees have 15 additional legislative days for their action, and Senate floor action is required to be completed within another 15 legislative days. Thus, congressional consideration of the implementing bill could take up to 90 legislative days

There is lots of dissension in Congress over the TPP. Multiple industries are not happy with what they have heard about the final deal and the largest movement ever to oppose a corporate trade deal is well positioned to escalate.

The TPP can be stopped, but it requires people to stay educated, rapidly spread information about the shortcomings of the agreement as they become available and mobilze to stop Congress from ratifying the agreement.We can stop the TPP and defeat the trans national corporations that are behind this global corporate coup.