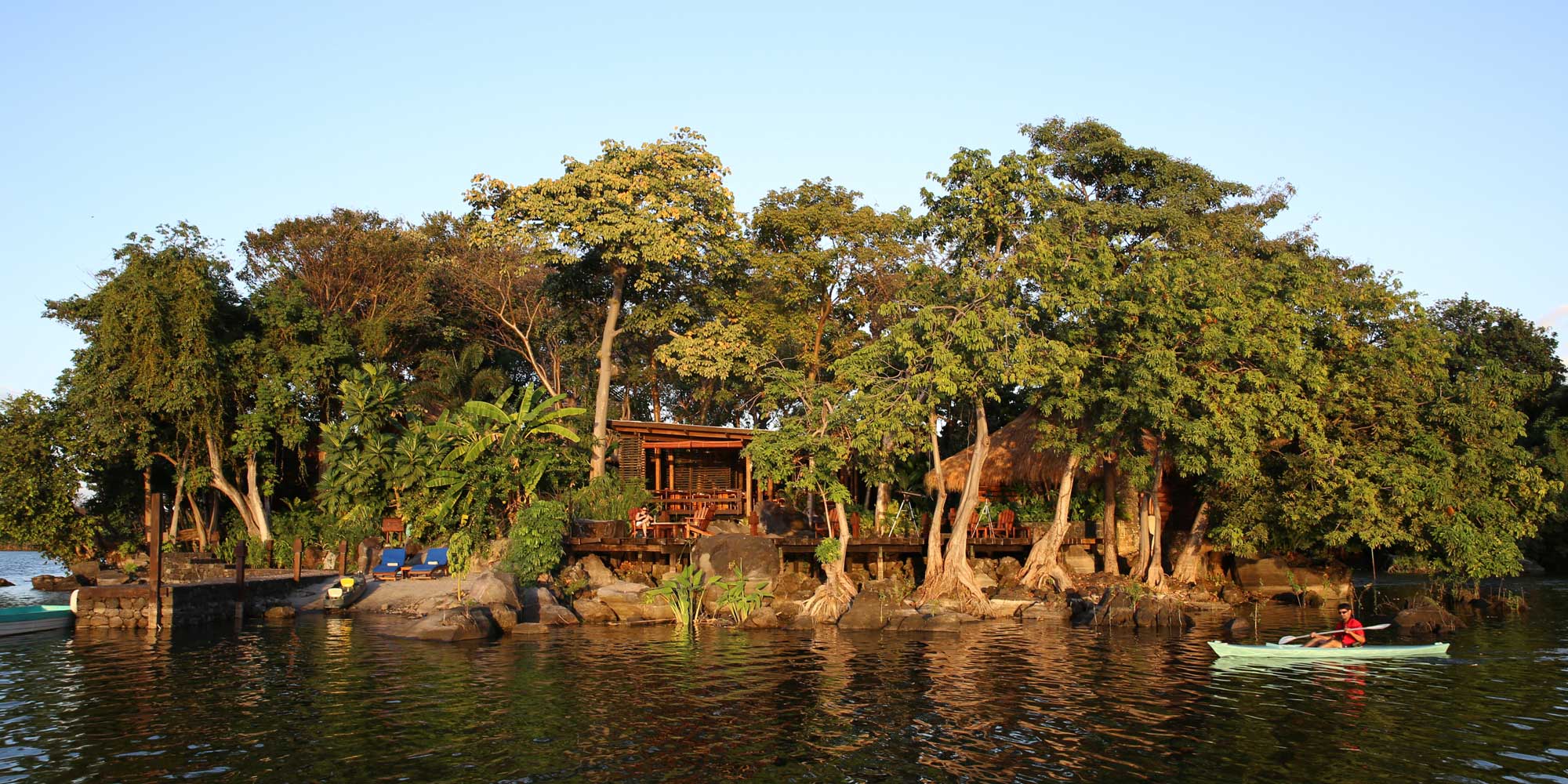 Breaking With The Defunct Idea Of Development

A longer version of this article was included in the book “The Revolution Won’t Be Stopped: Nicaragua Advances Despite US Unconventional Warfare” published by the AfGJ. Go to p. 123.

One of the particularities of tourism in Nicaragua is its democratization. Since the Sandinista government won elections in 2006 and came to power in 2007, the promotion and expansion of the tourism sector is increasingly important for Nicaraguans, contributing significantly to a rise in incomes for many lower-income families.[i] Contrary to the focus on tourism (or even ‘ecotourism) for export in many countries, the Nicaraguan government’s tourism policies incentivize Nicaraguan working-class family tourism. This has been the result not only of tourism promotion outside of the country, but primarily a consequence of the Nicaraguan government’s social, economic and legal policies directed towards re-embedding the economy in the biosphere and in Nicaraguans.

As Anasha Campbell, Nicaragua’s Tourism Minister points out, “in Nicaragua, tourism is based on small and medium-sized enterprises (SMEs). Eighty percent of the tourism industry is based on SMEs and the democratization of government investments means that benefits go directly to the Nicaraguan people. They do not go to big capital, which mostly exports the benefits of this sector.” While multinational corporations and big business do exist in Nicaragua, they do not dominate the economy. The fact that SMEs are at the heart of the tourism economy means that “the Nicaraguan people and Nicaraguan families are the ones who offer their services and products in the tourism industry.” [ii]

Most goods and services related to tourism, like many other income-generating and life-sustaining activities in Nicaragua, come from what Nicaraguan sociologist Orlando Nuñez Soto calls “the popular economy” (or “the people’s economy”). This “economic subject” is formally “composed of the family, community, cooperative and associative sector and is organized into the Council for Social Economy (CES), where low-income farmers, peasants, fishermen, artisans and merchants are grouped together.” The popular economy, as Nuñez points out, produces more than fifty percent of the wealth in Nicaragua in terms of income (big business produces around thirty percent while the public sector produces fourteen percent).[iii] Considering government policy in general, and tourism policies specifically, one can observe that it is precisely the popular economy that is at the center of the Sandinista government’s priorities.

Nicaraguan government tourism policy[v] has specifically focused on being coherent with orienting resources and plans in order to integrate the concept of equity with the biosphere and Nicaraguan culture(s). The pillars of the strategy are the following:

Notwithstanding the contradictions of implementing change in a predominantly capitalist world, Nicaraguan government initiatives have attempted to push back against the governing economic world-view, asserting its sovereign right to act according to values of culture, democracy and justice as perceived by Nicaraguans and in the Nicaraguan context – not Western-imposed interpretations.

Tourism (both international and domestic) has also allowed for a renewal in the relationship between the Pacific and the Caribbean (Atlantic) Coasts of Nicaragua. For the majority of Nicaragua’s history, the Atlantic Coast was marginalized from the rest of the country. However, the Sandinista government has focused on rehabilitating the relationship between both parts of the country. As a result of improvements in infrastructure, health and education on the Atlantic Coast, tourism policy also promotes the experience of, as Campbell puts it, “a different part of Nicaraguan history; how to interact with the different cultures.” Campbell says that she, herself, is part of the policy of diversity and peace:

“I am one of those examples. I am from Bluefields (on the Atlantic Coast) and this democratization of tourism brings it together, brings that ease of interaction between Nicaraguans, between the Pacific coast of Nicaragua and the Caribbean coast of Nicaragua…that in itself is how tourism has been providing benefits to all the different parts of society, helping to bring about understanding among the people, encompassing that multicultural and multiethnic part of the nation in general. Therefore, we believe, not only in terms of employment or income generation, that tourism enhances that understanding between cultures and also contributes to strengthening the culture of peace in all countries. Nicaragua is no exception.”

Between 2007 and 2018, tourism policy in Nicaragua served as an example around the world.[vi] In addition to being the second fastest growing destination in the entire American continent (eighth in the world), Nicaragua was also classified as one of the safest countries to visit in Central America, second in Latin America. Security and tourism attractiveness, however, should not be looked at in a vacuum. These are the results of a comprehensive governmental effort to bring a sense of dignity back to the people through free health care and education, access to electricity and water, roads, food-sovereignty and more.

But the government of Nicaragua was, unfortunately (in the eyes of Western capitalism and “democracy”) not going in the right direction with these policies.[vii] The Nicaraguan capitalist conservative sectors and the oligarchy, in coordination with the US government, could not stand the continued success of a government that was not directly controlled by their interests. As Kevin Zeese and Nils McCune put it in their article Correcting the record: What is really happening in Nicaragua, the problem is “the example Nicaragua has set for a successful social and economic model outside the US sphere of domination.”[viii]

Nicaraguan tourism policies aren’t necessarily a ‘problem’ for the US government in of themselves, as much as the fact that they successfully attracted foreign (i.e. US) tourists to visit the country. If there is a threat of successful “tourism” in Nicaragua, it is that Nicaragua, a country with few resources compared to wealthy countries like the US, could improve so much in terms of general human social, economic and health well-being.[ix]

The United States’ long-term regime change efforts in Nicaragua culminated in an attempted coup that saw the tourism sector come to nearly a full stop in mid 2018.[x] The main initial objectives of the “soft” coup-attempt were to discredit Nicaraguan government policies and delegitimize the president, Daniel Ortega, in the hopes of imposing a new government more favorable to US and oligarchical interests.

However, in the months after the 2018 coup-attempt failed, and despite a relentless and continued barrage of fake news – not only in Nicaraguan-opposition and international media outlets but also on official US and European foreign ministry websites – regarding the situation, tourism slowly started returning to Nicaragua.

Challenges to a Different Future in Tourism: Development, Capitalism and Path-Dependency

Since its formative years as a state, Nicaragua has played a small but revelatory role in the global economy of resource extraction and capital circulation. The European discovery of ‘America’ and the industrial revolution made Nicaragua’s geographical location and landscape greatly susceptible to the demands of international commerce and, as a result, US hemispheric commercial interest.

From coffee, cattle and cotton to mining and cheap labor, the demands of the global trade in goods (and labor) have shaped Nicaragua’s landscape. Successive US-imposed Nicaraguan governments deepened the entrenchment of Nicaragua’s economy, culture, and politics into the global order of capital circulation. In 1979, however, the Sandinista Revolution put this trajectory of traditional development and growth into question.

To break from this trajectory is extremely difficult and complicated. From Sandinista government policies in the 1980’s to its policies during the last fourteen years, the most significant challenge to creating an alternative to ‘development’ has been to overcome the combination of long-term US government intervention and the chains of “path dependency”, imposed by political, legal, socio-economic and psychological local and international structures. For Nicaragua to break away from the path chartered by global capitalism means confronting the traditional paradigms of development and growth, a transformation that is not as easy as “dandole vuelta a una tortilla” (Nicaraguan saying; literally meaning “flipping a tortilla;” metaphorically meaning changing a situation quickly).

Presently, international tourism is vital for Nicaragua, as are other export goods, since it not only allows people from around the world to discover “the land of lakes and volcanoes,” but, thanks to government policy, it provides Nicaraguans with the possibility of a dignified means of income that does not directly over-exploit humans and the environment. However, given that tourism, as all other export-revenue (dollar) generating activities, is inevitably part of the global metabolism of capitalism, the challenge for Nicaragua in the future will be to decrease its dependency on the double-sided coin of foreign exchange and export activities.

This is not an easy task because it means transforming how and what people consume. It means transforming not only what Nicaraguans consume – most Nicaraguans already consume very locally, except for the middle and upper classes – but also what tourists consume. This doesn’t mean cutting Nicaragua off from the world, but finding a balance that is favorable to Nicaraguans in times of instability. It means creating a new tourism that is low-carbon, circular, complimentary, respectful of people and the environment.

In his latest book, Paul Oquist, Minister and Private Secretary for National Policies for the Presidency of Nicaragua, remarks that “the hegemonic economic, social, and political structures, as well as mechanization, automation and artificial intelligence have concentrated wealth to the point where one percent of the world’s population controls over fifty percent of the world’s wealth. At the same time wealth redistribution mechanisms have been weakened. If this continues with the imminent rapid expansion of artificial intelligence, nearly worldwide economic, social, labor, and political instability and crises are completely predictable.”[xi]

Oquist and the Nicaraguan government are very conscious of the situation Nicaragua faces in light of global challenges. In writing about the dominant forms of development, Oquist says “we have lost touch with our place in the evolution of the universe and Mother Earth. Our most common answers to the big questions have worn thin and lack the spiritual urgency that can be the basis for a Survival Movement. For this we need to have an understanding of the Universe and Mother Earth and how we are an integral part of evolution, collectively and individually, that renews our identity and values, and elevates our level of consciousness of our current situation and the vulnerabilities and risks that threaten our existence. What is required is a transformation through a Survival Social Movement that constructs a low-carbon, climate-resistant and resilient, circular, sustainable society with far greater equality.”

In effect, Nicaraguan government (tourism) policies are rooted in the spirit of a “Survival Social Movement” seeking to discover, through real world practice, other ways of living fulfilling lives as individuals, families and communities, all this while facing enormous internal and external contradictions and pressures to succumb to the imperial God of development.

[vii] S. Wilson, Brian and Nils McCune. “US Imperialism and Nicaragua: ‘They Would Not Let Our Flower Blossom.’” In Live from Nicaragua: Uprising or Coup? A Reader. Alliance for Global Justice, 2019.

[x] Live from Nicaragua: Uprising or Coup? A Reader. Alliance for Global Justice, 2019.