Above: Brexit protest in London for the Put it to the People March, March 22, 2019. Photograph by Dan Kitwood-Getty Images. 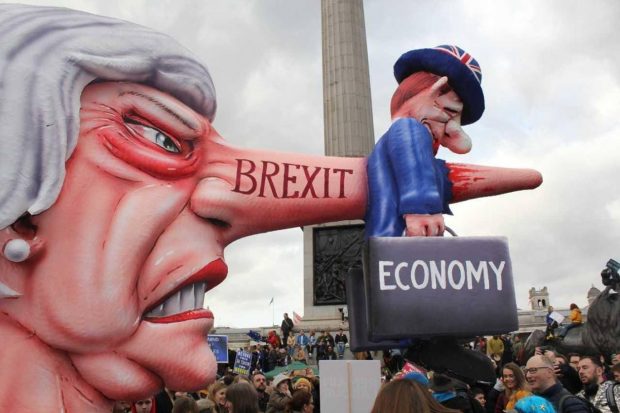 Brexit protest puppet from March 22, 2019. Photo by Angela Christofilou for The Independent.

Brexit seems to be blowing up as a deadline nears for the British exit from the EU and before another crucial week for Prime Minister Theresa May that threatens her survival in office. There are reports that her ministers are organizing to remove her and predict she will be gone within ten days.

The Independent reported, “An estimated 1 million people staged one of the biggest marches in British history to demand a second referendum on Brexit and for the public to have the Final Say on the gathering crisis.”

Gina Miller of  Lead Not Leave wrote,“Today’s truly epic march is testimony to the groundswell of public opinion turning against Brexit. A groundswell so great that it can no longer be ignored in a fully functioning democracy.” There had been suggestions that the march would be met by counter-demonstrations, but none in evidence.

More evidence of the political backlash against Brexit came from an online petition to revoke Article 50 which will soon pass the 5 million mark and keep rising. Parliament is required to consider debating petitions that achieve 100,000 signers.

The Guardian highlighted how out of touch May is with the people, writing: “The decision by so many to take part, waving EU flags and banners and carrying effigies of Theresa May, came just three days after the prime minister said in a televised statement to the nation that she believed the British people did not support another referendum and blamed MPs for trying to block their will.”

Next week, Parliament is expected to attempt to take control of the Brexit process by holding a series of votes on different Brexit outcomes. Options could include the prime minister’s deal, revocation of article 50, a second referendum, a customs union deal, a deal-based single-market model nicknamed “common market 2.0”, a Canada-style agreement, or no deal. Jeremy Corbyn is calling for votes on four options – Labour’s alternative, common market 2.0, a customs union and a public vote – to see where a majority of Parliament is possible.

The Prime Minister may try for a third time to force her deal through parliament on Tuesday but this seems pointless as she has lost in landslides in her two previous attempts and nothing has changed that would alter the outcome. If she is defeated again, the outcome could see her forced to quit. Members of Parliament are openly speculating that her time in office could end within weeks and are calling on her to “fall on her sword.”

The Guardian reports: “May was facing mounting pressure to name a timetable for her departure as a final gamble to win Conservative votes for her deal, though Tory sources suggested even that option may not have the desired effect.”

Reuters reports that the Sunday Times cited 11 unidentified senior ministers and said they had agreed that the prime minister should stand down, warning that she has become a toxic and erratic figure whose judgment has “gone haywire.” They go on to report, “The end is nigh. She will be gone in 10 days,” quoting an unidentified minister. People are jockeying to replace her. De-facto deputy, David Lidington, is one contender to be interim prime minister but others are pushing for Environment Secretary Michael Gove or Foreign Secretary Jeremy Hunt.

The article concludes: “Betting odds indicate there is now a 20 percent chance that May will be out of her job by the end of this month.”

Some of the media attack our judges as enemies of the people.

The Prime Minister attacks our MPs for standing up for ordinary people.

Well – we are the people – and when it comes to #Brexit we want a say over our future. #PeoplesVote 🇪🇺#PeoplesVoteMarch 🇪🇺 pic.twitter.com/6Lh93cdb3J

These guys were awesome. #brexit pic.twitter.com/hlUUTQZyYs

More than one million people are thought to have joined the #PeoplesVoteMarch to demand a second vote on #Brexit. pic.twitter.com/G8CGNihcrO

1.8 million people marched against Brexit making it the biggest ever peoples protest in history, on the same day the #RevokeArticle50 petition became the largest.

I was there. History was made. pic.twitter.com/HAP5ZbdCGX

Today a million people marched to say NO to #Brexit. Brexit shows that you can tell lies to win a referendum but then you will be defeated by reality. pic.twitter.com/u1x29u7P2G

There’s a huge movement for a rethink on Brexit.

Brexit is not a project of renewal – it’s a mess.

This is the strength of feeling now.

If Brexit happens, the anger and pain will be worse.

We should harness this energy, this passion and fix the *real* problems we face. pic.twitter.com/4TvnZgGzbv

There’s a party going on at #RevokeArticle50March #PeoplesVoteMarch #brexit pic.twitter.com/pySRAqfGlK 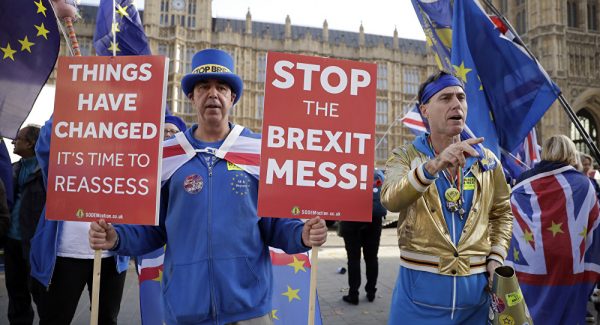