FOOTAGE has emerged of protestors gathering outside Downing Street and chanting “no one voted for Boris”, following the Prime Minister’s latest move to prorogue Parliament.

Boris Johnson’s plan to suspend Parliament in order to force through a no deal Brexit by October 31 has been confirmed by the Queen’s Privy Council. The move has been met with backlash, with members of the public taking to the streets in London and Manchester to protest. One video shows hundreds of protestors chanting “no one voted for Boris”, while holding up EU and UK flag.

Police officers can also be seen lining the gates outside Downing Street.

The protest video was posted on Twitter by Amnesty International’s Stefan Simoanowitz, captioned: “‘No one voted for Boris’ sing the crowd outside Downing Street. #StopTheCoup #SaveDemocracy”.

A protest in College Green, London, kicked off at 5.30pm, alongside another demonstration in Manchester’s Albert Square.

Pro-EU activists made signs which they are protecting from the rain with umbrellas in Manchester in what they have called a “pro-democracy protest”.

The protestors even started their own hashtag, called #StopTheCoup. 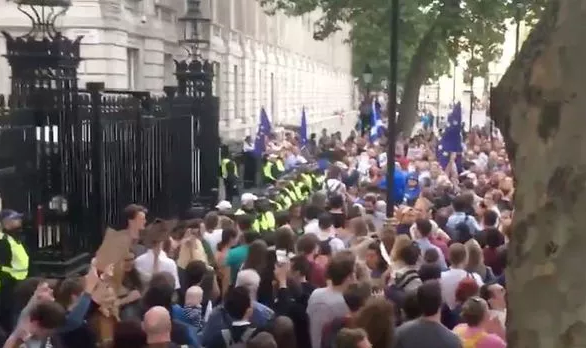 Brexit news: police can be seen outside the gates to Downing Street (Image: Twitter/@StefSimanowitz) 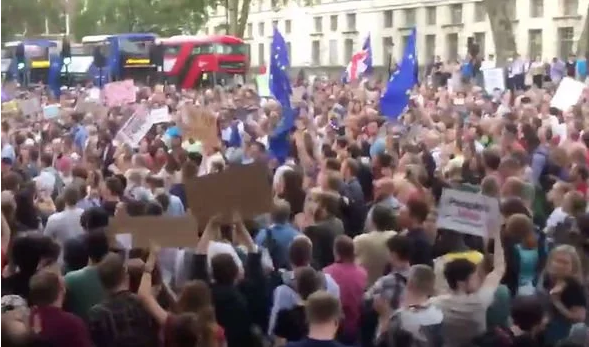 Earlier on Wednesday, Guardian columnist Owen Jones called for people to take to the streets to protest the proroguing of Parliament, labelling the Prime Minister’s nations a “disgraceful assault on democracy”.

Mr Jones posted on Twitter: “Our unelected Prime Minister has started a war with our democracy.

He also posted: “With just five hours notice, thousands have taken to the streets to defend a democracy our ancestors fought for at huge cost and sacrifice – and #StopTheCoup”.

The protests took place just hours after Mr Johnson’s move to prorogue Parliament n order to force through a no deal Brexit by October 31 was confirmed by the Queen’s Privy Council.

The Prime Minister sparked panic among Remainers after he confirmed he asked the Queen, who is currently in Balmoral, to agree to suspend parliament days after MPs have returned to work next week.

In a letter to MPs outlining his Government’s plans, Mr Johnson denied it was to force through a no deal Brexit and said he was bringing forward a “bold and ambitious domestic legislative agenda” which MPs would be able to vote on in October.

Brexit news: MPs are set to return to Parliament on September 3 (Image: Express)

Scottish First Minister Nicola Sturgeon said: “So it seems that Boris Johnson may actually be about to shut down Parliament to force through a no-deal Brexit. Unless MPs come together to stop him next week, today will go down in history as a dark one indeed for UK democracy.”

Meanwhile, EU chief Jean-Claude Juncker told Mr Johnson on Tuesday he would look at any concrete proposals the Prime Minister had to renegotiate the Northern Irish backstop but underlined that the bloc’s support or Ireland was steadfast.

In a statement after the pair had a 20-minute phone call, the Commission said: “President Juncker repeated his willingness to work constructively with Prime Minister Johnson and to look at any concrete proposals he may have, as long as they are compatible with the Withdrawal Agreement.

“President Juncker underlined the EU27’s support for Ireland is steadfast and that the EU will continue to be very attentive to Ireland’s interests.”

The Prime Minister has tasked his chief negotiator David Frost to travel to Brussels today for high-level talks with members of Michel Barnier’s Article 50 task force.