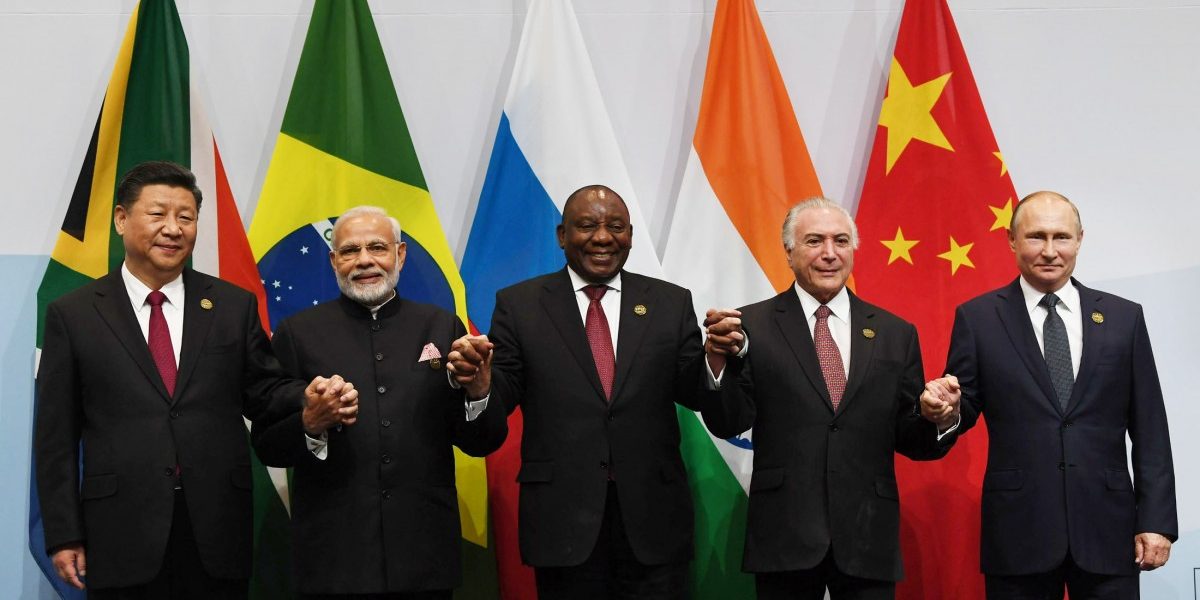 BRICS Leaders Are Reinforcing, Not Replacing, The Global System Of Power

Above Photo: The BRICS leaders at the South Africa summit. Credit: PIB

The BRICS bloc starts with rhetoric about an ‘alternative’ to Western hegemony and ends up amplifying neoliberal capitalism instead.

Can the Brazil-Russia-India-China-South Africa (BRICS) bloc rise to the occasion, as Donald Trump jerks Western imperialism out of traditional alignments? With war-talk against Iran blowing through Trump’s tweets, and with Washington’s trade wars raging against both China and traditional allies, there was talk here in Johannesburg about counter-hegemonic prospects during the last week of July. Chatter about reforming multilateral economic power structures, launching a new BRICS credit ratings agency and prospects for leapfrog technology within the ‘4th Industrial Revolution’ (4IR) also filled the air.

The most vainglorious elements of South Africa’s ruling elite were thrilled that BRICS leaders descended for several days of pageantry. Visiting heads of state Michael Temer, Vladimir Putin, Narendra Modi and Xi Jinping – joined for a day by ‘BRICS-Outreach’ and ‘BRICS-Plus’ tyrants Recep Tayyip Erdoğan, Faure Gnassingbe, Joseph Kabila, Paul Kagame, Emmerson Mnangagwa, Yoweri Museveni and Ali Bongo Ondimba among others – were welcomed at the Sandton Convention Centre, in the heart of the world’s most corrupt corporate district (according to regular PricewaterhouseCoopers ‘Economic Crime’ surveys).

Gama is also a member of Survé’s five-person BRICS Business Council, and he and his Transnet predecessor Brian Molefe (who was also Survé’s predecessor as council chair) allowed the huge state transport parastatal to became the main milk cow of the notorious Gupta brothers’ ‘state capture’ corruption network. Billions of dollars’ worth of Transnet kickbacks were arranged for the Guptas over the last few years, especially from two Chinese parastatal firms – which may see Gama losing his job in the coming days.

But the BRICS failed to stand up to Trump, mainly due to their ideological diversity, given that several pro-Washington leaders offset Xi. An excellent opportunity to establish a firmly oppositional stance against Washington was utterly wasted.

The only apparent unity came from the elites’ love of mercantilist-neoliberalism. As South African president (and mining tycoon) Cyril Ramaphosa put it, “We confirmed our commitment to the World Trade Organisation, as the most effective mechanism available to ensure a rules-based transparent, non-discriminatory, open and inclusive multilateral trading system.” In late 2015, the BRICS signed on to the last major revision of world trade rules in Nairobi – which effectively terminated the prospect for food sovereignty remaining a public policy option.

In contrast, progressive international reform is practically impossible at present, as witnessed in the teetering global financial markets. To illustrate, the BRICS further distorted the International Monetary Fund (IMF) during its 2015 vote restructuring. Four of the five took much greater shares for themselves (aside from South Africa, which lost 21% of its vote) at the expense mainly of poorer countries.

The BRICS were at the same time in the process of establishing the Contingent Reserve Arrangement (CRA) as a supposed alternative to the IMF but upon closer examination, once a country borrows 30% of its quota from that fund, it must go to the IMF and get a structural adjustment programme to access the remaining 70% (so little did the BRICS elites trust each other). Yet reflecting how far reform hucksterism has permeated the BRICS scene, even Financial Mail journalist Steven Cranston remarked that the CRA will provide “protection against global liquidity pressures without having to bow and scrape to the IMF.”

Even more bowing and scraping is done when New York credit ratings agencies prepare their reports, as South Africans know well. But in Sandton, not only did a hoped-for alternative credit ratings agency (RA) not materialise – in spite of Brazil, Russia and South Africa suffering junk ratings from the hated Standard&Poors, Fitch and Moody’s. Worse, the BRICS Expert Group report on a new RA suggested features that recreate in such a body many of the three agencies’ same foibles.

That Expert Group recommended, “The BRICS RA shall adopt the issuer-pay business model since it is well-tested and globally accepted. The BRICS RA should be set up as a private sector entity to ensure private-sector efficiencies, independence from government influence, credibility and acceptance by global investors… On the governance and operational aspects, too, private-sector efficiencies can be derived to ensure commercialisation on market-based principles.”

RA technical advisers will be important: “The expert group suggests a voluntary network of well-established credit rating agencies registered in each of the BRICS nations be formed.” In short, as in so many aspects of its work, the BRICS bloc starts with rhetoric about an ‘alternative’ to Western hegemony and ends up amplifying neoliberal capitalism instead.

The main site to consider antidote analysis and news is ‘BRICS from below,’ a tradition of counter-summit critique begun in Durban five years ago, and also witnessed in Fortaleza in 2014, Goa in 2016 and Hong Kong in 2017. (In 2015, Russia’s Ufa proved an impossible site in which to generate civil society critiques, and instead Vladimir Putin established a ‘Civil BRICS’ hand-in-hand with Oxfam to draw activists inside the tent to piss politely, rather than stay outside pissing on the tent.)

The annual counter-summit activity included a Teach In at the University of the Witwatersrand and two protests: one at the Sandton summit led by the United Front-Johannesburg and the other at the BRICS New Development Bank (NDB) regional branch nearby. The former, on July 26, raised the variety of critiques now increasingly common against BRICS states and companies: exploitation and unemployment, climate change and pollution, violence against women, repression and surveillance, non-delivery of services, austerity, budget cuts, human rights abuses, rampant corruption, racism, xenophobia, extreme inequality, looting of natural resources, subimperialism, neoliberalism, dictatorships and homophobia.

There were especially angry delegations representing Kashmiris, Rwandans and Congolese. Indeed, the Muslim Lawyers Association managed to get a docket initially investigated by Pretoria’s National Prosecuting Authority for the Indian regime’s gross human rights abuses in Kashmir, but one of Ramaphosa’s most trusted ministers ensured it was quashed a few days before the visit.

The other protest, against the NDB on July 25, was led by four Goldman Environmental Prize winners and their organisations and allies: Makoma Lekalakala of Earthlife Africa, Bobby Peek of groundWork, Thuli Makama of OilChange International and Des D’Sa of the South Durban Community Environmental Alliance. They mainly raised the vexing questions of socio-ecological damage and corruption associated with the mega-projects typically announced with fanfare at the BRICS summits, and now increasingly financed by the NDB.

Indeed, a huge increase in coal-fired power plant financing resulted from the biggest single loan announced during the BRICS summit: the China Development Bank’s $2.5 billion credit to complete the state-owned power company Eskom’s generators at Kusile, still mired in corruption and missed deadlines. With its 4,800 megawatts of supply, Kusile will emit 31 million tonnes of CO2 annually, one of the world’s most carbon-intensive power plants.

Following a major 2009-11 campaign against the World Bank and US Ex-Im Bank financing of Eskom’s coal generator expansion (focused on Kusile’s predecessor Medupi power plant), the leading pollution watchdog groundWork has called for further Kusile work to be halted.

Again, corruption is a factor. In 2015, the US Securities and Exchange Commission fined Hitachi $19 million for violating the Foreign Corrupt Practices Act, specifically for making “improper payments” to South Africa’s ruling party when bidding to install coal boilers worth $5.6 billion. But Hitachi’s work continues at Kusile, with no South African prosecution.

On top of that, the NDB reactivated a $180 million deal for restructuring Soweto’s electricity grid plus privatised renewable grid lines. The first is opposed by Soweto community activists led by decommodified-electricity activist Trevor Ngwane, on grounds it will end up squeezing local consumers.

The NDB energy grid loan to Eskom is also being fought by the country’s largest trade union – the National Union of Metalworkers of South Africa – because it will prevent progress towards a socially-owned, worker-managed renewables sector. Metalworker leader Irvin Jim argues instead for a non-profit strategy of energy based on “decentralised ownership and operation integrated into a coherent, national centre. We made it clear that the national grid must be publicly owned and must remain the backbone of energy provision.”

Instead, the NDB promotes the Independent Power Producer model, which, says Jim, is “the privatisation of Eskom by other means and we reject it in its totality. We cannot allow the grid and the supply of electricity to be placed in private hands. We have learnt many hard lessons in the past about privatisation. It ultimately worsens conditions for workers and their families, through increased tariffs and retrenchments.”

Transnet also received a recent $200 million loan from the NDB, to finance the expansion of the Durban port-petrochemical complex. It is firmly opposed by D’Sa and his neighbours for reasons ranging from the borrower’s prolific corruption to its insensitivity to climate change to the anticipated rise in local pollution and housing displacement.

No nukes, at least for now

At least South African society breathed a sigh of relief at one announcement, regarding the largest proposed mega-project made at prior BRICS summits in 2014 and 2015: $100 billion worth of nuclear energy reactors. That deal, between former South African president Jacob Zuma and Putin, is now on indefinite hold.

As Ramaphosa explained, “On nuclear, we said because our economy is not participating at a level we would like it to and have huge financial constraints, we are not able to proceed with a nuclear build programme. President Putin was relaxed about this and says that we (must) deal with our issues, and when the situation changes we can talk and that’s where we left it.”

This was one of several diplomatic stresses. Another occurred during the main symbolic event for the five leaders: visiting the ‘Cradle of Humankind’ where some of the world’s oldest hominids (four million years) have been preserved. At the last moment, the visit was replaced with what should have been a live video feed from the site (an hour west of Johannesburg). Ramaphosa admitted, “The logistical arrangements were a little difficult for us” (to get to the Cradle site). Then, to everyone’s embarrassment, the video feed also failed.

As a journalist observed, “There were so many logistical failures that it was ironic for the leaders to discuss the 4th Industrial Revolution as part of their future plans.” Most enthusiastic was Survé: “I have a vision, as a South African, African and internationalist, that our continent will thrive, that millions of unemployed youth will be educated with the skills required for the 4IR.”

The ironies of the BRICS are here encapsulated, for they begin with the critique everyone shares of a world out of control, one facing myriad geopolitical, economic and environmental meltdowns – and end with even more contradictions. Now, with Trump setting the agenda on the building and destruction of political alliances between states while wrecking prospects of multilateral action, the world requires a new generation of international leaders to develop a genuine alternative.

That can only occur based not on the desire to merely gain a seat at the global corporate capitalist table, as do the BRICS elites, but on overturning it.