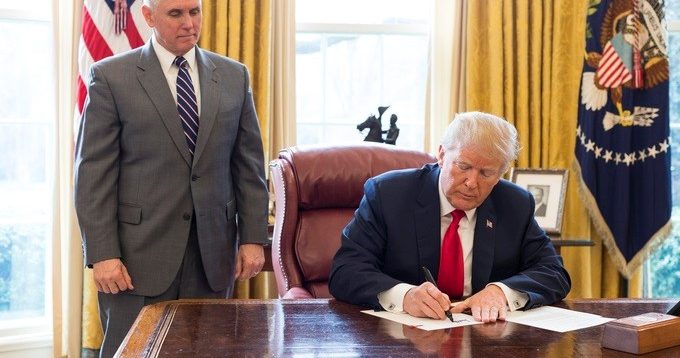 Briefing: The Effects Of The Economic Blockade Of Venezuela

The blockade in context

The U.S. has been pursuing a strategy of ‘regime change’ through destabilising Venezuela dating back to the early years of Hugo Chávez’s presidency. This led George W. Bush’s administration to support the failed coup d’état against Chávez in 2002 and also the right-wing management lock-out in the oil industry. The lock-out, while ultimately unsuccessful, cost billions of dollars in lost revenues and had a catastrophic impact on the government’s social projects.

Declassified US government documents and Wikileaks material have shown that the US has subsequently used covert financial, political, media and diplomatic activities in pursuit of its goal, including channelling millions of US dollars to right-wing opposition groups to support their bid to destabilise and topple the elected governments of both Presidents Chávez and Maduro.

But with the repeated failure of US-financed efforts by Venezuela’s right-wing opposition to overthrow the government, even after two major campaigns of street violence and sabotage (in 2014 and 2017), the US government decided to take a central role in the strategy of ‘regime change.’

As part of this shift, the US under President Obama’s administration adopted the use of unilateral illegal sanctions against Venezuela. Under President Trump sanctions, which can take various forms, have become focused towards creating an extensive economic blockade of the type employed against Cuba since the early 1960s.

The US, with the complicity of Canada and the EU, has adopted a strategy of financial strangulation against Venezuela. This involves, amongst other aggressive measures, an oil embargo, the international blocking of bank accounts and obstruction of financial transactions outside Venezuela, severely affecting the state’s capacity to import food, medicine or anything else.

The intention is to attack and dislocate the Bolivarian social model, seeking its collapse in order to dismantle it. To pursue this full-scale economic war against Venezuela, the US State Department has applied 150 coercive measures against the country. The US sanctions have been intensified since the failure of the US-backed attempted coup of Juan Guaidό, launched in January 2019.

At the same time, comments from Trump himself, Vice-President Pence and Secretary of State Pompeo have included threats of military action against Venezuela. Having created the conditions (or the perception) of economic and political collapse in Venezuela through the blockade, this could take the guise of an international (i.e. US) “humanitarian intervention” in military form, or support for a coup d’état by sections of the military.

“The pressure campaign is working. The financial sanctions we have placed on the Venezuelan Government have forced it to begin becoming in default, both on sovereign and PDVSA, its oil company’s debt.
“And what we are seeing… is a total economic collapse in Venezuela. So our policy is working, our strategy is working and we’re going to keep it.”

Are US sanctions legal?

US sanctions date from April 2015 following President Obama’s Executive Order a month earlier, permitting them on the grounds that Venezuela is an “unusual and extraordinary threat to US national security and foreign policy”.

Each Executive Order since then declares that because of the situation in Venezuela the United States is suffering from a “national emergency”. This designation is required by US law in order to impose such sanctions and is invoked under the 1976
National Emergencies Act.

The unilateral sanctions imposed by the Trump administration are illegal under the Charter of the Organization of American States (OAS), especially articles 19 and 20 of Chapter IV. They are also illegal under international human rights law, as well as treaties signed by the United States. They have no mandate from the United Nations.

The sanctions fit the definition of collective punishment of the civilian population, as described by the Geneva (Article 33) and Hague conventions, to which the USA is a signatory.

Alfred de Zayas, a former secretary of the UN Human Rights Council (HRC) and an expert in international law, who toured Venezuela in 2018 and produced a report for the HRC, has recommended among other actions that the International Criminal Court investigate economic sanctions against Venezuela as possible crimes against humanity under Article 7 of the Rome Statute.

Idriss Jazairy,the UN’s special rapporteur on coercive measures’ impact on human rights, has also voiced his major concerns about US sanctions against Venezuela. In January 2019 he said: “Coercion, whether military or economic, must never be used to seek a change in government in a sovereign state. The use of sanctions by outside powers to overthrow an elected government is in violation of all norms of international law.”1

What are the key sanctions that make up the blockade?

The set of US financial sanctions – to which new sanctions are continually being added to make them as comprehensive as possible – aims at financially strangling Venezuela’s economy. The measures include:

All these prohibitions apply to US persons, entities or companies and those resident or operating within US territory or any jurisdiction within the US (i.e. foreign individuals, entities or companies), but also apply everywhere else extraterritorially, where the US can exert pressure and/or enjoys support for the blockade.

How seriously has Venezuela been affected by the sanctions?

A recent report2 by the respected economists Mark Weisbrot and Jeffrey Sachs has found that “most of the impact of these sanctions has not been on the government but on the civilian population.”

Among the impacts which have disproportionately harmed the poorest and most vulnerable Venezuelans are an increase in disease and mortality (for children and adults). The report estimates that more than 40,000 deaths have since 2017-18, making the U.S. sanctions fit the definition of collective punishment as described in both the Geneva and Hague international conventions, to which the U.S. is a signatory.

How specifically have the sanctions impacted on Venezuela’s economy?

Venezuela as a predominantly oil-based economy is inherently vulnerable to effects of a blockade. It is the export of oil that provides the Venezuelan government with the revenue in foreign exchange that is needed to import essential goods: food, medical equipment, spare parts and equipment needed for electricity generation, water systems or transportation.

At the same time, sanctions that constrain the Venezuelan government’s ability to operate freely in the global market further restrict its essential financial dealings.

Sanctions have also had an indirect but severe impact on the oil industry’s output. The loss of credit and therefore the resources to maintain production levels through maintenance and new investment have led to production plummeting.

Weisbrot and Sachs have suggested that “the loss of so many billions of dollars of foreign exchange and government revenues was very likely the main shock that pushed the economy from its high inflation, when the August 2017 sanctions were implemented, into the hyperinflation that followed.”

Additionally, the financial sanctions carry heavy extra costs in higher interest payments, more expensive transport costs, and concrete losses from the illegally confiscated assets, whose total thus far experts calculate to be in the region of US$30 billion.

How have the sanctions impacted on Venezuela’s people?

The immediate impact of the sanctions levied in 2017 was that a series of banks across Latin America, Europe, Asia and the United States were all unable in the remaining months of the year to process standard commercial transactions with Venezuela, including payments for imports of food and medicines. These included, for example

As the sanctions have continued to bite, the effects have also included:

A clear example of how sanctions have directly impacted on vulnerable Venezuelan citizens is that 24 Venezuelan patients in Italy awaiting bone marrow transplants can no longer have their treatments and expenses paid for, as a result of the US.’s seizure of Citgo which had previously covered the costs. Funds from Citgo worth 5 million euros ($5.57 million) allocated as payments for bone marrow transplants for Venezuelan patients and held at Portugal’s Novo Banco are frozen. As a result, to date three children have died.

How has Trump tightened the blockade in 2019?

In tandem with the Trump administration’s recognition of Juan Guaidό’s unconstitutional declaration of himself as “interim president” of Venezuela, a series of Executive Orders approved swingeing new sanctions on Venezuela, as well as additional sanctions tied in with the US’s recognition of Guaidό’s attempted coup and his concept of a “parallel government”.

The net effect of these actions has been to drastically reduce Venezuela’s ability to produce and sell oil, or to sell any foreign assets of the government since its most important foreign assets have been frozen and/or confiscated

This has reduced still further foreign exchange earnings that would be used to buy essential imports, such that imports of goods are projected to fall by 39.4%, from $10 billion to $6.1 billion. This will undoubtedly have an even more severe impact on the lives and health of ordinary Venezuelans, especially the poorest and most vulnerable.

In particular, Venezuela has been cut off significantly from its largest oil market, the United States, which in 2018 had bought 35.6% of its oil exports. At the same time, the Trump administration has tried to pressure other countries, such as India, not to take up the slack, as well as telling oil trading houses and refiners across the world to restrict further their trading with Venezuela or face sanctions themselves, even where such dealings are not prohibited by published US sanctions.

These moves were denounced as unilateral sanctions not against officials but against the general population of Venezuela by Venezuelan Foreign Minister Jorge Arreaza at a United Nations meeting on April 25 2019. He went on to say: “we are campaigning for ourselves so that the world understands the consequences of the unilateral blockade of the US government on Venezuela, consequences that have taken the lives of thousands of Venezuelans.”

An immediate response by the Trump administration was to add the Foreign Minister to the list of sanctioned Venezuelan officials.

Is Britain involved in any way with sanctions on Venezuela?

Through its involvement in the European Union, the British government is a supporter of the sanctions regime unanimously agreed by the EU in November 2017, which consisted of sanctions targeted at 18 senior individuals, coupled with demands for Venezuela to ensure what it called ‘free and fair elections’.

In a speech at Chatham House in October 2018, Minister of State for the Americas Sir Alan Duncan warned that should the Venezuelan government not accede to the demands, fresh sanctions would be considered with Britain’s international partners.

In response, Jeremy Corbyn criticised this call for further sanctions, saying: “The future of Venezuela is a matter for Venezuelans. Jeremy Hunt’s call for more sanctions on Venezuela is wrong. We oppose outside interference in Venezuela, whether from the US or anywhere else. There needs to be dialogue and a negotiated settlement to overcome the crisis.”

In addition to the sanctions, the Bank of England, although nominally independent of the government, has taken its lead from the government by stopping 31 tonnes of Venezuelan gold deposited in its vaults, worth almost £1 billion, from being repatriated to its rightful owners, the Venezuelan government.

What is the way forward?

Venezuela Solidarity Campaign will continue to work to:

2 ‘Economic Sanctions as Collective Punishment: The Case of Venezuela’ by Mark Weisbrot (Co-Director at the Center for Economic and Policy Research (CEPR) and Jeffrey Sachs (Professor of Economics and Director of the Center for Sustainable Development at Columbia University), CEPR, April 2019.