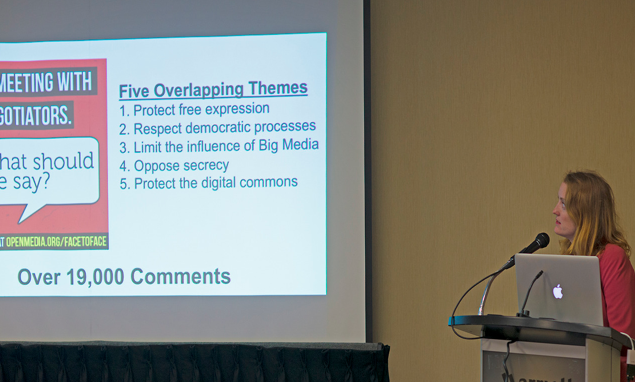 This post is from OpenMedia and does not represent the Fair Deal Coalition.

For over two years now, we’ve been pushing back against the secretive and extreme Trans-Pacific Partnership, specifically the provisions around intellectual property, which would censor the Internet and require your Internet service provider to make serious violations of your privacy rights. Those behind this deal – the 12 negotiating countries, and the industry lobbyists who get privileged access to the negotiations – never make it easy for civil society groups to participate in the negotiating rounds. This time really was a new low, however, as at the last minute the location of the talks changed from Vancouver to Ottawa – 3,500 kilometres away.

Since we’d already promised the over 19,000 people who submitted comments using our Internet Voice tool that we would share their concerns with the TPP decision-makers, I made the trip to Ottawa. I’m taking this opportunity to tell you a little bit about what that was like – to take you under-the-hood of how it feels to challenge huge government and corporate bureaucracies in this way, by bringing public perspectives into what should be a democratic process.

Bringing your voices to TPP Negotiators

During each round, we kick it into high gear with a set of targeted actions to get the public’s attention, and put some pressure on the negotiators. We know that Trade Ministers are being pressured by lobbyists to seal the deal on ISP liability (i.e. forcing your Internet service providers to spy on you) and copyright term extensions (i.e. keeping creative works out of the public domain for way longer than is beneficial to our economy, but is very nice for Big Media profits and control).

Thanks to the work of our partners on the ground, and our Fair Deal coalition, these are some of the most contentious parts of the deal. We really can stop our own countries from agreeing to this if we keep speaking out and applying public pressure, to show politicians behind the TPP that they are gambling with their own political power by signing it. We’ve been doing that by enlisting the help of small businesses and innovators that rely on the open Internet as well – with our partners we released an open letter, which Jeremy and Maira from the EFF read out to negotiators yesterday, right after I read out your citizen comments. (Bonus: check out Wikimedia’s statement about why they signed on).

This is an approach that can basically work with any political process. What’s challenging with the TPP specifically, however, is figuring out how to bring your voices directly to negotiators. It’s not like a normal hearing by communications regulators at the FCC in the U.S. or the CRTC in Canada, or the Senate etc., where the public usually gets a chance to participate (and often even gets their costs covered). There are no formal opportunities for the public to give input to these processes – we’re not even supposed to be able to see the text of the deal, not until after it’s already signed, sealed and delivered. There’s even an agreement not to release the negotiating positions of each country until 4 years after the deal has been signed, and the specific politicians associated with it are, in many cases, out of office! Much accountability. Many wonderful. So the lack of opportunity for input has also forced us to get creative. We’ve staked out the lobby of the negotiations before and projected your comments on the wall. We’ve passed around an iPad at a rare “stakeholders day.” We’ve beamed a “bat signal” at the walls of buildings in Washington DC. Other groups have pointed a giant arrow at the location of the negotiations, or gotten a group of singing grandmothers to protest outside.

This time, our campaigners Josh and Meghan worked with partnering organizations to book a room for a luncheon and brought in very well respected experts for an “expert briefing on intermediaries and term extensions.” Very non-threatening. Negotiators from most of the 12 countries attended. It was standing room only, and huge kudos should go out to EFF and Public Citizen for getting so many of the negotiators out for lunch.

When the Ball Starts to Roll: Your Participation Can Create Momentum

It was amazing that we did get so many of the negotiators out – we could only get a room in a hotel down the street from where the negotiations were actually taking place.

Once we have the negotiators in the room, the energy ramps up. What’s amazing right now is the way that we can demonstrate momentum – campaigning can feel like pushing a huge boulder along a rocky road, not knowing when you’ll finally hit a slope and get a lot further, a lot faster. Because of your involvement, the TPP campaign is starting to get that kind of energy. In previous rounds, we’ve run the Internet voice tool for a longer period of time (sometimes months), and made it easier to use by allowing people to submit a generic, pre-loaded comment (though indicating a strong preference that supporters write their own). Cumulatively, we had about 15,000 people who had used the tool before this round.

This time, we relaunched the tool for just a few weeks, and made it more challenging to use by requiring supporters to write their own comment – we got 19,000 people as of the time of my presentation. Being able to point to this kind of momentum is crucial for showing negotiators and, more importantly, the politicians who ultimately hold the power, that they won’t be able to sign this deal without major negative impacts on their electability. We were also able to point to the over 3 million people around the world who have spoken out with our partners and via the Stop the Secrecy action, and to the fact that we doubled our goal of 20,000 people using our crowdsourcing tool to create a positive vision for copyright – almost 40,000 people have used that tool at openmedia.org/crowdsource.

In my presentation (which you can check out online, including my speaker notes) I read out your comments on 5 themes: Protecting Free Expression, Respecting Democratic Processes, Limiting the Influence of Big Media, Opposing Secrecy, and Protecting the Digital Commons.

A Facebook supporter asked me if there was a video – there is no way the negotiators would be up for that, just another way this process is set up to limit transparency and accountability. I emphasized that the pro-Internet community doesn’t like the deal we’ve seen in the leaked text, and the secretiveness of the process means that many of our supporters oppose it in principle. It’s always a challenge to play what we call the “inside/outside” game – where we build a lot of outside pressure, but also seek opportunities for inside access to communicate that pressure.

I try to approach this by being firm but friendly; I frame bringing them your perspectives as a service to them (a service we shouldn’t have to do, as it is the government’s job to take public perspectives into account) and I start with the assumption that they must care what you think. I open by asking them to reflect on what the phrase “possibilities of the open Internet” means to them. To us, it means increased democratization not just of our culture and media, but of our politics. It means newer, easier, more global ways to empower people to be involved in making decisions that will affect their daily lives. These are all really good things, that can help us create a more just world. These possibilities are being stifled by both the TPP process and the deal itself. This is what I tried to make clear to the negotiators.

And it’s your comments – really, your insights and your eloquence – that allow us to bring home this message. I want to close here by saying a very sincere thanks to the over 19,000 people who submitted comments during this round, the ~40,000 people who have helped us crowdsource a new vision for free expression, and the over 3 million people who have spoken out against censorship and secrecy worldwide. I’ll obviously never meet all of you, but without you, not only would it feel way more lonely and scary to go up against the TPP, it wouldn’t even be possible, since this work relies on grassroots fundraising. So – thank you. I hope you’re with us for the duration of this fight, because we won’t stop until we win. Onwards, and for the open Internet.