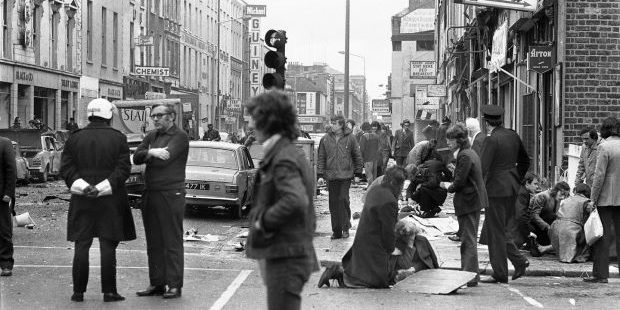 Britain Forgets Its Recent History Of Unleashing War In Europe

Above photo: The aftermath of the Talbot St. bomb. Tom Lawlor.

In the early hours of Thursday morning, in what will perhaps finally result in the COVID-19 mainstream media narrative being permanently banished from the headlines, almost nine years of Western provocations via its Eastern European proxy state Ukraine would culminate in Russia launching a military intervention into its Western neighbour – with attempts to resolve the situation peacefully by Moscow over the past several months ultimately proving fruitless due to Kiev failing to implement its side of the Minsk Agreements, which would see a federalisation solution in which the breakaway pro-Russian Republics of Donetsk and Luhansk, located in the predominantly ethnic Russian Donbass region of eastern Ukraine, being given a degree of autonomy whilst still remaining under the rule of Kiev – both Republics being given formal recognition by Moscow on Monday instead, in response to the breakdown in negotiations.

With Russian President Vladimir Putin outlining in his speech commencing the military operation that a decisive factor in launching the intervention was a failure by NATO to honour a previous agreement that it would not expand eastwards following the end of the Cold War, and that the intention of the operation is to destroy Ukrainian military infrastructure that would ultimately be used by the alliance against Russia should Kiev become a member, one can only hope that the current situation doesn’t escalate further into a long-term conflict in which ordinary Ukrainian citizens will suffer, or indeed a catastrophic global conflict involving the use of nuclear weapons should NATO decide to intervene directly – with Ukraine having come under the influence of the US-NATO hegemony following the 2014 Euromaidan, a CIA and MI6 orchestrated regime-change operation launched in response to then-Ukrainian President Viktor Yanukovych’s November 2013 decision to suspend a trade deal with Brussels in order to pursue closer political and economic ties with Russia.

The immediate Western reaction following Thursday’s intervention however, was to predictably shift all blame onto Moscow and pay almost little to no attention to the almost nine years of provocations which had preceded it – such as Western support for the notoriously anti-Russian neo-Nazi Azov Battalion of the Ukrainian National Guard, established post-Maidan and which played a key role in Kiev’s war on Donetsk and Luhansk following their secession in April 2014, a month after the historically Russian peninsula of Crimea voted to reunify with Moscow.

British Prime Minister Boris Johnson also accused Moscow of ‘unleashing war in Europe’, seemingly forgetting his own warmongering in Iraq, Syria and Yemen, and also Britain’s not too distant history of unleashing war on its nearest European neighbour – Ireland.

In 1974, the occupied north of Ireland had been in a five-year long grip of escalating violence – the civil rights movement, established in 1967 to seek equal rights for the north’s Irish Nationalist community, had been met with violence every time they took to the streets, being beaten and teargassed by a predominantly British Unionist police force, violence which would eventually culminate in Bloody Sunday, the massacre of 14 civil rights demonstrators by the British Army in Derry in January 1972 – London having deployed its forces to the north in 1969, using the pretence of being a neutral peacekeeper between two warring sides as a means to counter the influence of the IRA, re-organised the same year in response to the ongoing violence, and whose membership would grow exponentially following the massacre.

Indeed, such was the violence inflicted on the Nationalist community of the north of Ireland by Britain and its proxies, that the southern 26-county Irish state would soon begin to dissent from its traditionally pro-British stance.

In 1969, during the initial outbreak of violence, then-Taoiseach Jack threatened to send troops to the north in order to protect Irish Nationalists, in 1970 government ministers Charles Haughey and Neil Blaney would be dismissed from their posts following a collapsed trial where they were alleged to have planned to import arms for use by the IRA, and in the aftermath of Bloody Sunday, Irish police stood by as protesters burned down the British Embassy in Dublin.

Britain, fearing that Dublin would go on to become an official state sponsor of the IRA, decided that a message had to be sent.

On the 17th of May 1974, a Friday afternoon, with no-warning car bombs detonated during rush hour traffic in Dublin, killing twenty-seven people, ninety minutes later, another no-warning bomb would explode in the border county of Monaghan, killing seven. 300 people would suffer injuries as a result of the bombings also, with the Irish Free State returning to its traditionally pro-British stance regarding British occupation of the north in the aftermath.

These coordinated attacks, resulting in the largest loss of life in a single day during the most recent phase of conflict related to the occupation of Ireland, were carried out by the Ulster Volunteer Force (UVF), a Loyalist terrorist organisation operating under the command of the clandestine Special Reconnaissance Unit (SRU) of the British army – the use of proxy terrorist groups by Downing Street later being used as tactic by Downing Street against both Libya and Syria in 2011, having been perfected by Britain’s unleashing of war in Europe in 1974.