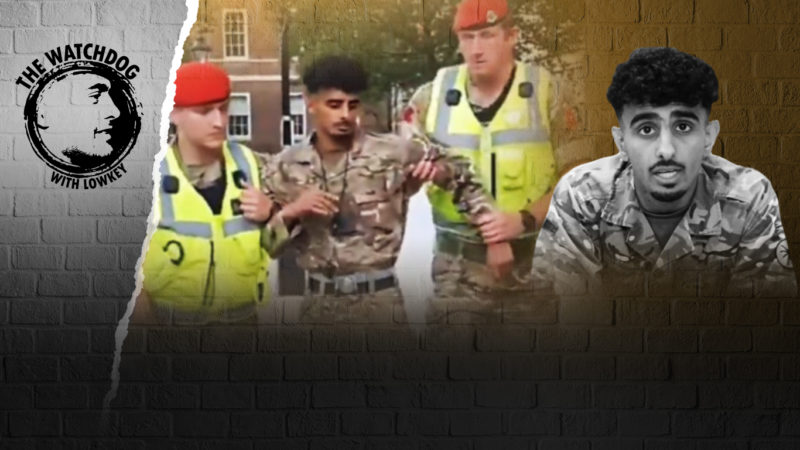 And Against Arms Support For Saudi Arabia.

“I’ve Seen Too Much Not To Speak Out And I’d Rather Sleep Peacefully In A Cell Than Stay Silent For A Paycheck” — Former British Soldier Ahmed Al-Babati.

The war in Afghanistan appears to be drawing to a close. But Western atrocities in the Middle East continue, with the 20-year-old War on Terror estimated to have displaced over 37 million people globally.

One particularly noteworthy example is the onslaught in Yemen, driving the country to become “the world’s worst humanitarian crisis,” in the opinion of the United Nations. Currently, more than half the country — 14 million people — are considered to be at risk of starvation.

While the Saudis may be doing the majority of the fighting, they are being armed, trained, aided and supported by the United States, Great Britain, and other Western nations profiting from the suffering.

One man who knows more than most about this is Ahmed Al-Babati. Ahmed was a lance corporal in the British Army until last August, where he staged a public protest in London, demonstrating against British complicity in the violence.

Explaining his decision, he said:

I joined the army in 2017 and took an oath to protect and serve this country, not to be part of a corrupt government that continues to arm and support terrorism. What made this decision so easy for me and why I choose to sacrifice a lot of things, including possibly my freedom, is the simple fact that I myself, as somebody who was born in Yemen, could have easily fallen victim to one of those air strikes or died from hunger.I’ve seen too much not to speak out and I’d rather sleep peacefully in a cell than stay silent for a paycheck.”

Ahmed Al-Babati joins Watchdog host Lowkey today to discuss his life, his protest, British crimes in the Middle East, and what can be done to put a stop to endless war.

Born in Yemen but growing up in the industrial city of Sheffield in the north of England, Al-Babati told Lowkey that he naively believed that the army would pay him to travel the globe and that the organization he was joining was a pro-Muslim one. However, he soon found that it was actually filled with fascists who support far-right provocateurs like Tommy Robinson or Nigel Farage.

As part of his duties to his faith, he began collecting money and sending food parcels to people in his birth country. However, he soon began receiving feedback from recipients that, while grateful, they would rather people from the United Kingdom stop participating in the ongoing slaughter than send aid. It was at that point that he began seriously examining his own life and how he was a part of the war machine. He told Lowkey:

I looked in depth at what the British involvement was and I felt like a hypocrite because I was helping these [Yemeni] people out in terms of giving them aid to live by. But at the same time, I was serving the same government that was putting them there [in a situation of famine] in the first place.”

In August of last year, Al-Babati staged a protest outside the Ministry of Defense in London. He was quickly detained and expected the worst. However, his actions received enough attention and public sympathy that he was not treated harshly by his superiors. “It is thanks to the people who were protesting on my behalf that the charges were dropped,” he said.

Britain plays an outsized role in the conflict in Yemen. A 2018 paper found that an estimated 7,000 employees of U.K. contractor companies, civil servants, and temporarily deployed military personnel were currently aiding Saudi forces in their attack on the country.

Serving Saudi Arabia is big business in the U.K. According to the Stockholm International Peace Research Institute, the kingdom is by far Britain’s most important arms customer, responsible for 49% of all international weapons purchases.

In this free-flowing conversation, Lowkey and Al-Babati discuss Britain’s role in the world. “Whether it is Yemen, Afghanistan or Palestine, it seems like we are at the center of the problems happening around the world. And the reason for that is that we benefit from it; we profit from it,” Al-Babati said.