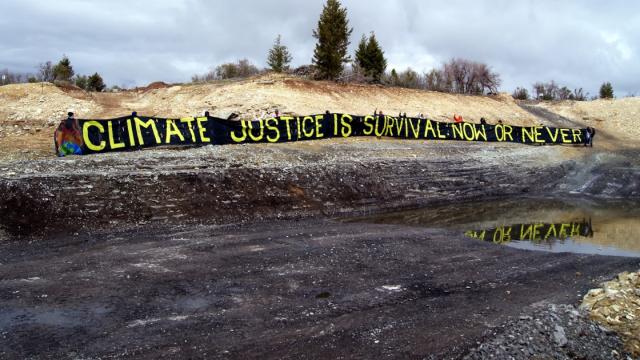 This is the fifth installment in a series co-produced by Occupy.com and Popular Resistance, written in the run-up to the People’s Climate March and Climate Convergence actions happening next week in New York ahead of UN Climate Summit negotiations. Read the first part here, the second part here, the third part here and the fourth part here.

The climate crisis is a crisis of democracy requiring a coordinated global grassroots mobilization to stop harmful policies and practices and build alternative systems that are effective and equitable. The climate crisis affects all of us and touches everything we care about. It will take a mass “movement of movements” to counter the power of money and corruption that prevents the change we need.

The last two decades have been wasted by political misleadership and, as a result, immediate action is required. A landmark report issued last week concluded: “By 2018, no new cars, homes, schools, factories, or electrical power plants should be built anywhere in the world, ever again, unless they’re either replacements for old ones or carbon neutral.”

We have a big task before us and need to build a global movement to make it a reality. Confronting climate change will require major political and economic transformations that will impact how we live our lives. We must transition from the Industrial Revolution to the Sustainable Revolution.

An important step in broadening the U.S. climate justice movement took place in January at the founding meeting of the Global Climate Convergence (GCC). Held in the Workers United Hall in Chicago, the meeting was attended by unions and by advocates for peace, food security, economic rights, civil rights, housing, the environment, renewable energy and those committed to ending corporate power. The GCC organized ten days of action from Earth Day to May Day to show that all of our issues are connected and that the climate crisis is the ticking clock that brings urgency to our work. The climate convergence is continuing with the NYC Climate Convergence being held for the two days before the People’s Climate March.

Labor’s involvement is necessary to achieve climate justice. The Labor Network for Sustainability criticizes the idea that “labor can focus on jobs, and leave the environment to the environmental movement.” They describe this silo approach as outdated and ensuring failure for both movements. Their founding president and executive director, Joe Uehlein, argues that labor needs to define and lead the way in a just “transition to a climate-safe economy.”

The new Trade Unions for Energy Democracy includes 41 institutions from 15 countries. They seek “to advance democratic direction and control of energy in a way that promotes solutions to the climate crisis, energy poverty, the degradation of both land and people, and responds to the attacks on workers’ rights and protections.” Their response to the climate crisis goes beyond the need to reduce emissions and protect workers to creating a world that is more just and equitable.

The People’s Climate March also attempts to bridge this divide between labor and environmentalists. Daniel Adam writes that “more than 30 unions presents a ground-breaking opening for labor and the climate movement.” The downside though is that the price for getting broad union involvement was to avoid clear demands that would offend some unions or their allies in the Democratic Party. The tent is so big that “it even includes organizations that support fracking and the tar sands gigaproject,” reports Anne Peterman. So, more work is needed, but progress is being made.

In addition to workers, business owners must understand the necessity of participating in the broad climate justice movement. The climate crisis will bring new challenges to businesses in the acquisition, production and transport of goods. It also brings new opportunities to be part of the solution. Either business will adapt to the changes that the climate crisis brings by adopting climate-friendly practices or they will become the blacksmiths and carriage makers of our time.

There are business groups seeking to confront climate change. For example, Business Alliance for Local Living Economies (BALLE), made up of 50,000 entrepreneurs and funders, have been advocating localism, sustainability and ecological restoration since 2001. Other business groups raise questions, as Chris Hedges writes: “The Climate Group, for example, which endorses the march, includes among its members and sponsors BP, China Mobile, Dow Chemical Co., Duke Energy, HSBC, Goldman Sachs, JPMorgan Chase and Greenstone.” They do not advocate for “carbon-free, nuclear-free,” but support a “prosperous, low-carbon future for all.”

Indigenous groups have taken a strong lead in organizing and action for Indigenous rights and protection of the planet. Idle No More began in Canada as a series of teach-ins on legislation in the Parliament and grew very rapidly when Chief Theresa Spence began a hunger strike on Victoria Island across from Parliament Hill in December, 2012. The movement gained international attention and solidarity actions occurred throughout North America.

The Idle No More movement brought greater attention to the challenges that First Nations face throughout North America and the work they’ve done to gain sovereignty and to protect the environment. Indigenous groups have educated about and advocated for protection of the air, land and water, have led marches and rides to raise awareness of critical issues, and have organized blockades and other direct action to prevent further exploitation of their rights and destruction of the Earth through extreme energy extraction for oil, gas, uranium and minerals.

In Canada, there has been both significant repression of First Nation protests such as the Mi’kmaq faced in New Brunswick, and victories such as in the Supreme Court decision that granted land titles to First Nations in British Columbia.

Food and water are two reasons for all people to join the climate justice movement. Food systems produce 19% to 29% of greenhouse gas emissions making agriculture a major sector needing transformation. In, “Grass, Soil, Hope”, rancher and environmentalist Courtney White describes agricultural practices that adapt to climate change impacts but also sequester large amounts of carbon in soil and improve both quality and output of food.

These are positive solutions that are win-win for agriculture, people and the planet. On the negative side, corporations like Monsanto and Dupont seek to control the world’s food supply through genetically engineered seeds and increased use of chemicals. And private corporations are vying to take over water, meaning scenarios like what is happening in Detroit where water prices are rising and residents are losing access to water will become more common.

Jacqui Patterson, the director of the NAACP Environmental and Climate Justice Program, points out that climate change is a civil rights issue. In the United States, on issues of food, health effects, the cost of fuel or impacts of carbon fuel pollution, African Americans pay a higher price even though they use less carbon fuels. The same is true globally where the poorest nations using the least fuel will be most impacted. These are reasons that people who care about the wealth divide or inequality should be part of the climate justice movement.

Veterans For Peace has been making the connections between the climate crisis and militarism. The U.S. military is the biggest polluter on the planet and uses tremendous amounts of fossil fuels. Current military conflicts are centered on control of oil and gas. VFP members have joined frontline communities in actions against coal and fracking and to demand clean-up of thousands of abandoned uranium mines left from the Cold War era. There will be a veteran’s contingent and peace roundtable at the People’s Climate March.

Youth are a foundation for climate justice advocacy. They have used the courts to sue for the right to clean air, pressured universities to divest from carbon energy and organized campaigns to stop extreme energy extraction. Informed youth understand that the climate crisis is not something in the future, but shapes their lives.

The ingredients do exist to build the people-powered movement of movements that can organize actions to expose and resist corruption of the political system and economy at all levels, and create alternative systems that are based on principles of sustainability, solidarity, equity and justice. On a daily basis we see examples of actions in communities that resist the expansion of fossil and nuclear fuels and build local living economies.

Climate justice is in our reach if we realize that the climate crisis connects all of us and take action to manifest our power. As Alice Walker said, “The most common way people give up their power is by thinking they don’t have any.” In this situation, we have a choice to continue on the destructive path towards climate chaos or to come together and build a future that not only addresses the climate crisis but is also healthier, more equitable and prosperous.

In the final article of this series, appearing next week, we will describe a common vision and strategy that can be used for developing clear demands and a positive pathway to the world that is needed and is possible.