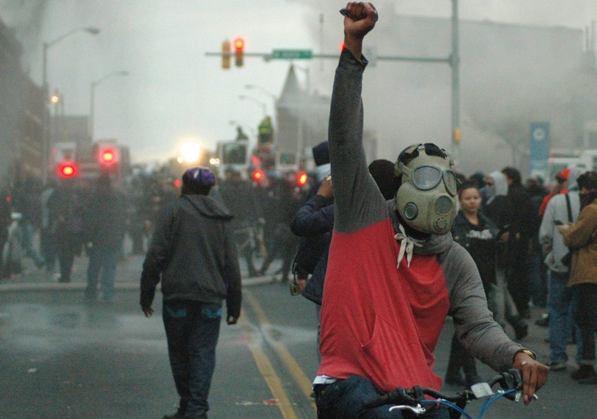 A pitch delivered at an expensive lunch between financial managers and city officials. Later, some careless speculation in an office on Wall Street, a few clicks on a keyboard, and another city goes broke. Services shut down. People get angry. Cops beat the people up. People go to jail. Somebody dies in the street. Protests and riots follow. Pundits and politicians lament our cultural decline. The speculators walk away with millions more of our money, broken bodies beneath their expensive shoes.

Who is writing this story?

On the evening of Saturday, April 25, protests in downtown Baltimore against the death-in-custody of Freddie Gray turned violent; according to many accounts, white thugs instigated violence and the cops responded to the response. The scene was ugly and tragic.

Forty miles away, comedians, elected officials and media celebrities wore tuxedos and drank wine as they listened to the President of the United States joke about partisan politics. The juxtaposition of police-induced riots in Baltimore with the opulence of the White House Correspondents’ Dinner led Ted Scheinman to declare: “If you’ve worried that the political class is out of touch with its criminalized underclasses, Saturday evening offered a grim case study.”

But what, precisely, are the elites out of touch with? It’s not merely police brutality, and it’s not merely economic malaise. What we are experiencing in Baltimore, Detroit, cities in Saint Louis County, Missouri, and all over the country is a causal chain: Big Wall Street banks and capitalist speculators arebleeding cities dry, ruining them economically, and in turn reactionary forces are fleecing and criminalizing poor people. Corporate capitalism creates broke cities, and broke cities create broken bodies.

Even if the elites were reachable, we haven’t reached them, because our message isn’t yet comprehensive. Our best writers and analysts articulate crises, but not connections.

To be sure, they articulate the crises well and offer important insights into the way criminalization acts as a weapon against poor people and people of color. Karen Dolan, project director for the Institute for Policy Studies’ Criminalization of Poverty Project – who co-wrote a fine report last month documenting the criminalization of poverty – detailed for me the effects of “the legacy of the enslavement of African people and their offspring in this country… segregated communities, less than optimal schools, higher rates of policing and incarcerating for the same crimes as Caucasian Americans.”

Dolan pointed out that criminalization’s “collateral consequences from arrest and incarceration records… creates impoverished conditions with little chance of escape for many.” Similarly, Jesse Janette, senior research associate in the Justice Policy Center at the Urban Institute, told me that “criminalization heavily intersects with race, but it’s also a class issue. People who are caught up in the justice system have always been people who are predominantly poor.”

My friend Brittney Cooper gets a little closer to the causal chain with her scathing critique of the “discipline the poor” policies recently enacted in Kansas, where the legislature there passed the HOPE Act, prohibiting those receiving monetary assistance from “using funds to go to movies, to go swimming, to go to theme parks, to gamble, to visit strip clubs or bars.”

Cooper writes: “The resentment and the lack of empathy that undergirds most of the social policy that emerges from the right prove just how out-of-touch and mean-spirited such social policy is.” Kansas legislators’ vilification of the poor, of course, takes place in a larger context of careless tax cuts and declining economic growth. But nobody in the media as high-profile as Cooper is articulating why state and local governments seem incapable of finding alternative ways to fund public goods.

Like Brazilian Archbishop Hélder Câmara, I want to do more than observe the hunger; I want to ask why the poor have no food. Poverty is criminalized because municipalities have no other way to deal with it. Just as poverty presents individuals with bad options and influences poor choices, impoverished cities behave with a similar irrationality, scapegoating the poor and lashing out with a vengeance against marginalized people.

Municipalities in Saint Louis County, where Ferguson and other cities have notoriously relied on court revenues extracted from poor citizens to finance their budgets, have run up against their limits; the unrest in Ferguson led the Missouri Senate to lower the limit of fine-funded city budgeting from 30 percent to 10 percent by 2017. But cities there remain trapped in a false dichotomy: Higher taxes, which will anger the relatively affluent, or cutting back of vital services, which will further hurt the poor. It’s a reasonable bet that the affluent will take their anger out on the poor through further policy brutality.

Meanwhile, new financial rules have counterintuitively worked to problematize municipal bond funding, eliminating some of the most efficient and sustainable sources of funding for cities. Forcing state and municipal governments into austerity measures also helps eliminate labor unions, pension obligations and social services. The bankers get our money, charge us for taking it, leave cities’ budgets bare, schools close, small businesses shut down, social programs fold, and only the cops remain. Not knowing what else to do with the surplus people around them, the cops break the bodies.

Unless we frame the narrative as one that begins with Wall Street stealing money from our cities and ends with the ruinous destruction and brutality we see around us, we risk becoming little more than sensationalizers of greedy bastards on one side, and pornographers of despair on the other.

But once we frame a comprehensive causal narrative, this opens up the space to discuss fair, just and workable ways for municipalities to finance themselves, fully fund schools and other services, create sustainable neighborhoods, and implement public safety programs based on cooperation rather than brutality. This means creating public banks that will manage cities’ pensions and other monies at radically low expense, returning their profits to the municipalities (or other levels of government) that operate them, as non-tax revenue. It means creating democratic, localized financial institutions that provide affordable credit and leverage capital for their communities. Postal banking with alternative lending services would do the same for individuals. And cooperative ownership models create more jobs and invite workers to invest more than their tired bodies into collective economic activity.

The need for narratives linking poverty, brutality and Wall Street greed has never been greater. The causal chain is playing out in large and small cities all over the country, and workable, just alternatives exist. It’s time for the people who describe the problems to start studying the solutions.