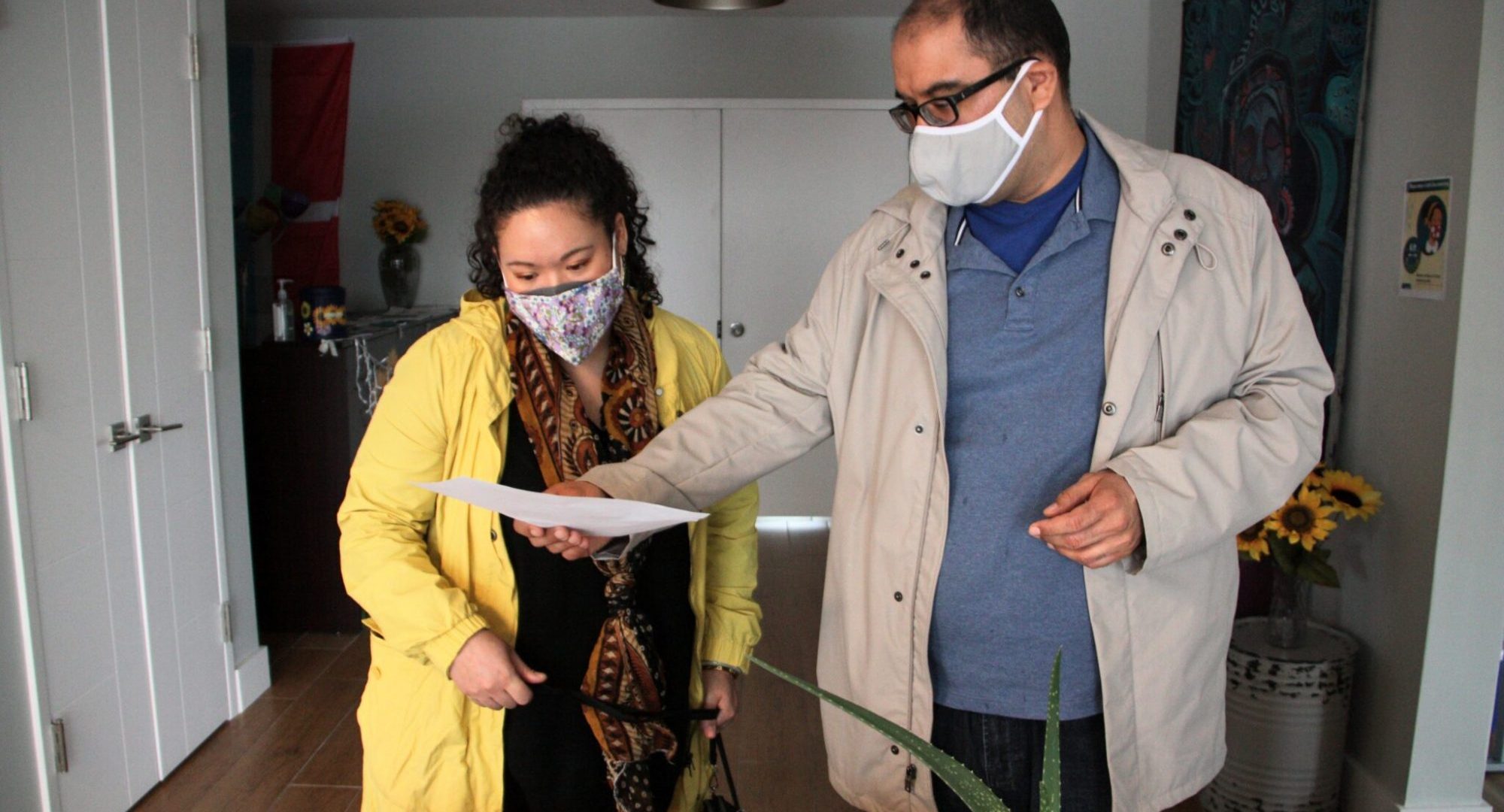 Above photo: Aroldo Garcia discusses a major offshore wind development coming to Brooklyn with Summer Sandoval, a campaigner with the environmental justice group UPROSE. The project could bring more than 1,000 jobs to a site in Brooklyn’s Sunset Park. Nicholas Kusnetz.

Residents of Sunset Park, a largely immigrant, working-class community, hope the project will bring high-paying jobs to an economically-stressed neighborhood.

When Aroldo Garcia learned that the operations base for a major offshore wind project was coming to his Brooklyn neighborhood, he thought about the jobs it could provide for his family members and friends who worked as handymen and contractors, and for others who didn’t have work at all.

The project promised to bring more than a thousand new jobs to a waterfront site in Sunset Park, a largely immigrant, working-class community where many residents have struggled to keep up with the rising cost of living. It was, he thought, exactly the type of development people had been waiting for.

The Biden administration has built its climate agenda on a promise that the country can create millions of high-quality jobs and address environmental injustice, all while driving a rapid transition off of fossil fuels. But this notion of a “just transition” has remained largely conceptual. In Sunset Park, many people involved in the projects say, it’s beginning to feel within reach.

In January, New York Gov. Andrew Cuomo announced plans for two offshore wind farms, to be built by the Norwegian oil company Equinor, that would be among the largest in the country.

The wind farms are part of an effort to pair environmental progress with economic development, drawing support both from government and people in the surrounding community. If all goes as planned, those supporters say, they could serve as a national model.

Equinor and government officials say the Brooklyn site will serve as a hub for the region’s offshore wind development. Upstate, in Albany, a separate port will build turbine towers, which will be floated down the Hudson River and staged in Brooklyn. All told, Equinor’s ports and wind farms are expected to create more than 5,200 jobs and deliver enough emissions-free electricity to power 1.3 million homes, according to the New York State Energy Research and Development Authority, which has said it would contribute up to $200 million in public funds to upgrade ports in the state. In return, Equinor has agreed to spend more than $50 million on workforce development, training and other programs intended to support and draw on the local labor pool.

For Sunset Park, the wind port offers an opportunity for green industrial development that can provide an alternative to low-wage retail jobs and dirtier industries that have given the neighborhood higher levels of air pollution than the surrounding city.

As a result, it has support from an unlikely collection of interests, including a community organization known for its fierce commitment to environmental justice and two major oil companies, Equinor and BP, which bought a 50 percent stake in the wind projects this year.

“This is about as remarkable a set of circumstances as I’ve seen,” said Nilda Mesa, who has worked in California’s Attorney General’s office, at the federal Environmental Protection Agency  and who, until 2016, was director of the New York City Mayor’s Office of Sustainability. “I’m hard pressed to think of another instance of a community with the private sector, with the state government, the city and the federal government coming together and saying, ‘We agree on this sort of approach, and we are committed.’”

Sunset Park’s waterfront was once a bustling hub of maritime commerce. Some 30,000 people worked in the warehouses and terminals that lined the port. Above it, the land sloped up to a neighborhood of brownstones and row houses that were home to immigrants from Scandinavia, Ireland, Germany and other European countries. Most of the men belonged to trade unions, the journalist Robert Caro wrote in The Power Broker.

But through the middle of the 20th century, Sunset Park’s fortunes declined. In the 1930s, the neighborhood was redlined by the federal government, depressing housing prices and encouraging residents to move elsewhere. In 1941, Robert Moses opened the Gowanus Parkway, which was later expanded into an “expressway,” an elevated highway that brought heavy truck traffic through the neighborhood and darkness to the once bustling commercial strip below. The 1960s brought the closure of a large marine terminal, and with it the loss of high-paying jobs along the waterfront. Warehouses were converted to a shopping mall and a federal prison. Others fell vacant.

Along the way, Sunset Park’s demographics shifted, as white residents moved out and many Puerto Rican immigrants, and later a more diverse mix of Latino and Asian immigrants, replaced them. In recent decades, Sunset Park has faced a new threat: gentrification. 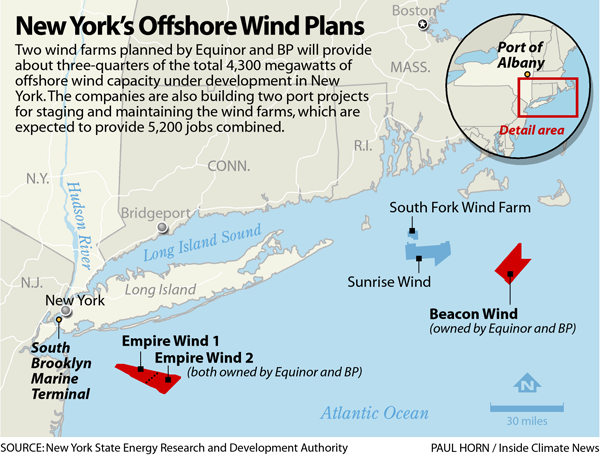 Garcia hopes the wind port can help turn things around without jeopardizing the neighborhood’s diversity.

“The way of the future is reindustrialization,” he said, mentioning an article he’d read recently about how the pandemic and online shopping have decimated retail jobs. Equinor’s development offers a different path, he said. “These jobs are livable, middle-class wages, and you don’t have to go to college.”

Garcia, who has closely cropped hair and a slightly stooped frame, came to Sunset Park from the Dominican Republic in 1992 as a teenager, with his parents. He works in his father’s contracting business, and said he hopes they might be able to get new work through the wind development.

He learned about the project through a community group he’s involved with, called UPROSE, which has fought to clean up the neighborhood’s dirty industries and bring in green development instead. The organization is currently fighting an effort to build a new gas power plant that would replace two of three oil- and gas-fired “peaker” plants that line the waterfront and fire up when electricity demand surges.