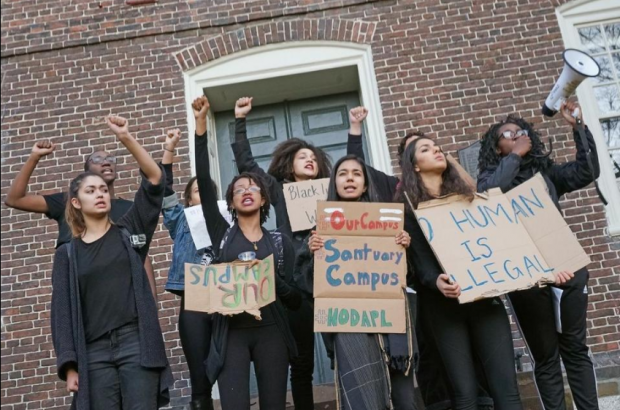 PROVIDENCE, R.I. — Several hundred Brown University students, most of them wearing black, on Wednesday afternoon staged a peaceful walkout urging school leaders to “protect” all Brown students, as organizers put it — particularly members of the Native American, black, Latino, undocumented, Muslim, LGBTQ and other communities who fear for their safety following the election of Donald Trump as president.

Just as students staging a similar action Tuesday at the University of Rhode Island had asserted, the Brown organizers said the issues raised transcend last week’s vote — specifically asking participants on their Facebook event page to “NOT bring signs with electoral messages to the walkout. This means no Hillary Clinton/I’mWithHer/Love Trumps Hate stuff. This walkout is about something bigger than a single election.”

Rather, organizers said, “It is a walkout against white supremacy, xenophobia, classism, transphobia, sexism and other systems of oppression that now have a platform in this nation. We affirm and validate those who have been already attacked prior to this election and those who were actively organizing before the election, but also those who are now more in danger because of this election and are forced to stand up.”

Asked why it was important for her to participate, senior Hassani Scott told The Journal: “Why wouldn’t it be important? It’s about who I am, what I believe in. My life is at stake, like many other people on this green.”

Scott said the election, and many of the circumstances surrounding its outcome, have left her nearly incredulous. “This is one of the first times I’ve been truly dumbfounded,” she said.

The action began at 3 p.m., when students and others began to assemble on the Wriston Quad. Some students had just walked out of classes.

From the quad, they marched across George Street to the Brown Green, propelled by chants including “Our campus!” and “Black lives matter!” and carrying signs including “Build Solidarity, Not Boundaries,” “Declare Brown a Sanctuary Campus” and “Status Quo Has Got to Go.” With the hashtag #OurCampus, word of the walkout spread quickly on social media.

The students and supporters then circled University Hall, office of Brown president Christina Paxson and other administrators. A list of demands was carried inside, but despite chants of “administrators come out!” none did. A Brown spokesman told The Journal that Paxson “was away from campus with obligations this afternoon.”

As twilight descended on the green, speakers continued delivering their messages by bullhorn.

This week’s Brown and URI actions come amidst a growing nationwide campus movement that reminds some of the 1960s, an era of civil-rights battles, and the early 1970s, when Americans increasingly opposed the Vietnam War. In both instances — and there are other historical precedents — students and the younger generation were instrumental in helping galvanize broader opinion that eventually changed public policy.

Since last week’s election, Paxson has been vocal, publicly and internally to the Brown community, in efforts to calm emotions and seek unity, tolerance and protection.

“This is a time to reaffirm community norms and standards of respectful behavior towards others. The Brown community embraces diversity and the treatment of all people with dignity, regardless of educational attainment, race, class, ethnicity, gender, religion, political views or other aspects of identity,” she wrote.

“Harassment and intimidation are contrary to Brown’s values and will not be tolerated. We reject the hateful and intolerant targeting of different identity groups. Brown’s emphasis on diversity, inclusion and respect goes hand-in-hand with our mission of advancing knowledge and understanding in a spirit of free inquiry.”

On Wednesday, Paxson said she was”appalled” by vandalism of American flags on the Brown Green on the eve of Veterans Day and pledged disciplinary action against the students believed to have been involved.