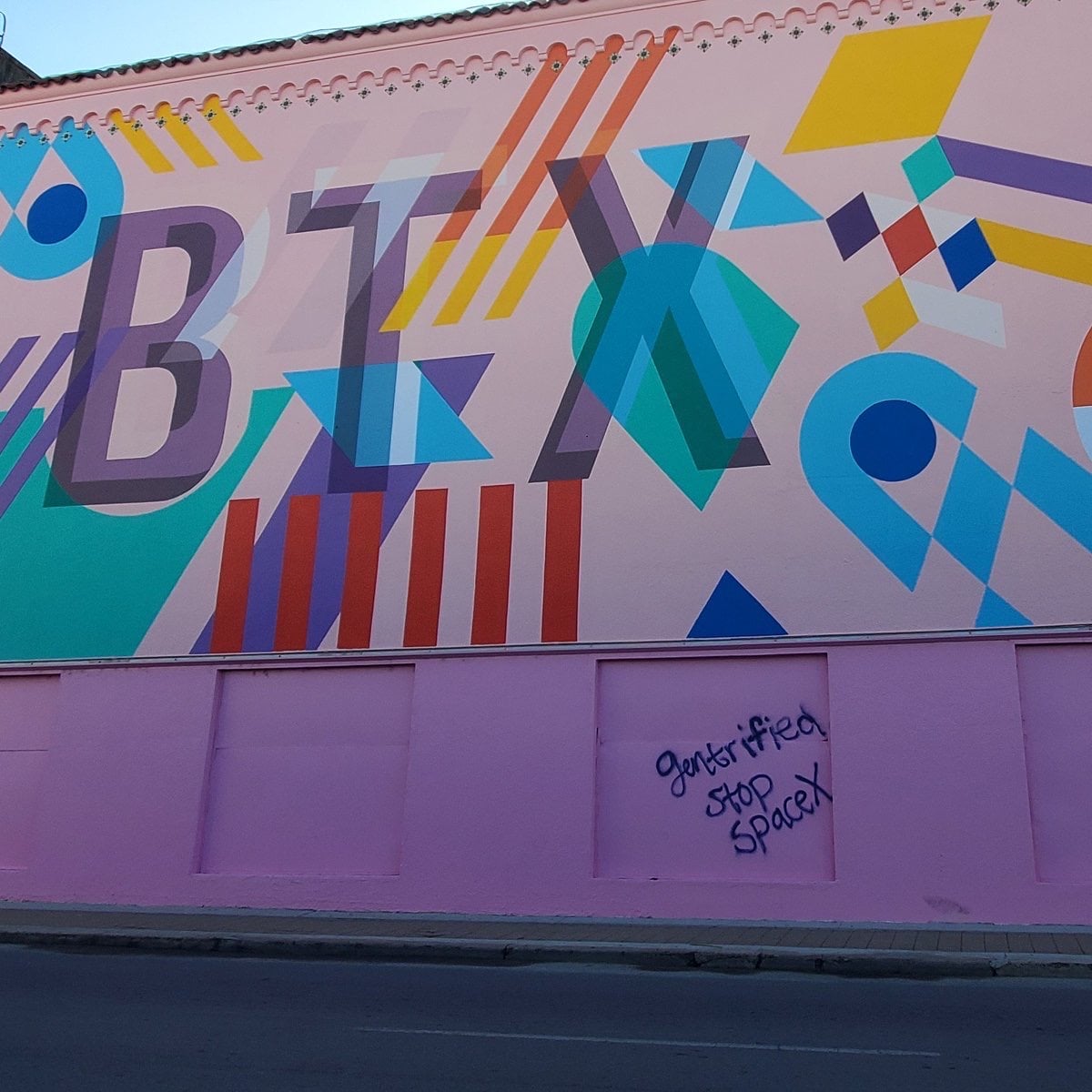 Why did police show up in force to apprehend a local activist, and why is the city’s top elected posting her mugshot and job details on social media?

Bekah Hinojosa was still in her pajamas Wednesday morning when she heard a knock on the door. Probably just FedEx, she thought, though the knock did seem a bit loud. When she peeked through her peephole, she saw a swarm of men. “Who is it?” she inquired. They were Brownsville police officers, she soon realized, there to initiate what would become a traumatic 24 hours for Hinojosa that would end in her border city’s mayor posting her mugshot and employment status on social media—all for the alleged crime of a little protest graffiti.

Hinojosa, a local environmental activist with the Sierra Club and Another Gulf Is Possible, says she cracked the door open and “they just pushed themselves into my apartment … grabbed me and handcuffed me.” She pleaded for the chance to change clothes—she was wearing a thin shirt and pants, no bra—but the officers refused, she said, even threatening to charge her with resisting arrest. There were around four officers total, she believes. She was still barefoot as they led her out to the car to take her to the police station downtown.The charge that precipitated this? A Class B misdemeanor for allegedly spray-painting the words “gentrified” and “Stop SpaceX” below a new mural on the side of a city-owned historic theater downtown.

SpaceX, the $100 billion corporation founded by Elon Musk, has built a controversial rocket launch site by a beach east of Brownsville, a 94 percent Hispanic city with a 29 percent poverty rate. The prospect of high-paying jobs and Musk’s promotion online of the area have helped fuel a vertiginous rise in home prices since 2020. The mural—an array of geometric shapes plus the phrase “BTX”—was paid for by the Musk Foundation and painted by a Los Angeles artist; some locals, including Hinojosa, view the mural as a symbol of outsiders gentrifying the area.

“There’s been public outcry about this mural for months,” said Hinojosa, who—under the advice of her attorney—did not answer questions about whether she created the graffiti. “A lot of people are frustrated that the city brought in this artist that’s not even from here to paint an uninspiring mural that just feels like rebranding to cater to … SpaceX employees and SpaceX tourists.”

On Wednesday, when Hinojosa arrived at the police station, she said she was placed in a jail cell and her glasses were taken. “I have really bad vision without my glasses, like I need them to brush my teeth,” she said. She was interviewed by a detective, who she said told her the police “know she’s involved in organizations” and asked how her employer would react to her arrest.

Hinojosa, who said she has no prior criminal record, spent the next 24 hours or so in the cell making periodic calls to family—all in her pajamas, getting headaches from straining to see without her glasses. “There was no clock in there; I never knew what time it was,” she said. “When it was finally nighttime they never dimmed the lights or anything. It was just bright fluorescent lights and I was too cold to sleep.”

On Thursday, Hinojosa was released on a personal recognizance bond, but the experience lingers with her. “Now I’m feeling post-traumatic stress from this,” she said. “I’m having trouble sleeping because I’ll be asleep and I’ll hear my neighbor outside and it’s like, ‘Oh no, what if someone’s going to knock again, what if they’re back?’”

Around the same time Hinojosa was released, Brownsville Mayor Trey Mendez—a major booster of both SpaceX and Musk—made a public post on his official Facebook page. He included Hinojosa’s full name, her mugshot, and a picture of the graffiti, noting that city cameras had captured the graffiti act. He added: “Ms. Hinojosa has been quoted in several anti-SpaceX articles and lists herself as a ‘Gulf Coast Campaign Representative’ for the Sierra Club on LinkedIn.” Mugshots of arrests in Brownsville are easy to obtain, as the police department maintains a Blogspot site.

Backlash on Facebook was swift. “You don’t make posts like this for every person that gets arrested so this seems personal and really unprofessional,” said Emma Guevara, a local progressive activist. “Drop the charges,” added former state House candidate Arturo Alonzo. “We should charge the artist,” Alonzo said, “por el pinche mural sin historia, sin cultura, y el trabajo todo chafa y mal hecho.” (“ … for the damn mural without history, without culture, and the job all shoddy and poorly done.”)

The Observer can find no similar Facebook post by Mendez about a misdemeanor arrest in the city. The mayor later edited his post to remove the references to Hinojosa’s media quotes and employment. Mendez did not respond to requests for comment by press time. The Brownsville Police Department declined to comment on the “open case” and advised the Observer to make a public information request, which is pending.

“This is an extreme, targeted attack on Bekah,” said Mike Siegel, a former Austin congressional candidate and attorney who is defending Hinojosa in the case.

“I assume that this is extremely out of the ordinary for Brownsville police to go to someone’s home in force and make an arrest on a misdemeanor graffiti charge without even an eyewitness report,” Siegel said. “This is just obscene and the fact that the mayor then immediately took it upon himself to go on social media to attack her, to attempt to harm her employment prospects … basically, the mayor admits that he’s retaliating against Bekah based on her advocacy against SpaceX.”

Under Texas law, Siegel noted, police are free to simply issue a citation for certain Class B misdemeanors, including graffiti. No arrest was required. Siegel said he’ll be seeking all records of the city’s communication with the police about the graffiti and also the reported camera footage. He believes Hinojosa’s charge should be dismissed “and frankly, the mayor should apologize for the way he’s abused his public office to attack a committed, active Brownsville resident.”

On Friday morning, Hinojosa drove by the downtown mural and snapped a picture with her phone: The graffiti was already gone.