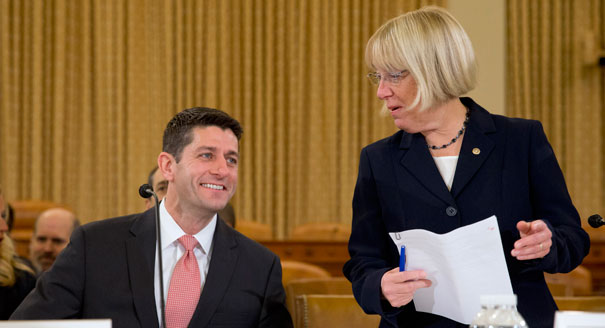 Austerity kills economies and jobs, and they know it. We know it, they know it, everyone knows it. It is obvious in front of our faces, and Republicans continue to force cuts — with many Democrats going along.

Since the financial collapse government spending has been cut and the results have been terrible for the economy. Under every previous President government spending and hiring propped up the economy until recovery was underway. Republicans as well as Democrats understood this is how it has to be done. Until now. Under Reagan and ‘W’ spending went up. This helped the economy get out of recessions. Under Obama, with a much worse recession, Republicans forced spending to go down.

What was the effect of these cuts? This next chart shows how this is a drag on GDP: So yes, the spending cuts are obviously hurting the economy.

Paul Krugman’s blog post, Unprecedented Austerity comments on this. He starts with a chart showing what has happened to government spending since Obama took office, writing, “Look at total government spending — federal, state, and local — and correct it for inflation …” Krugman writes, “You can see that there was a brief, modest spurt in spending associated with the Obama stimulus — but it has long since been outweighed and swamped by a collapse in spending without precedent in the past half century.” He calls this, combined with private-sector deleveraging, “awesomely destructive.”

“Awesomely destructive.” And you can see it.

That “modest spurt in spending associated with the Obama stimulus”? This is the effect the stimulus spending had on jobs: The stimulus took us from losing more than 800,000 jobs each month to gaining jobs every month since. It completely turned the situation around. But then it stopped and Republicans were able to force austerity and kill off the recovery.

So that’s the story of what has happened to government spending as Republicans impose austerity. Down down down. Now we have a “budget deal” (that even leaves out help for the long-term unemployed and doesn’t replace the “Hunger Cliff” $5 billion Thanksgiving Food Stamp cut, etc…) This next chart shows where this budget deal fits with earlier budgets proposals. This is what is missing from the explanations of this budget “deal:” spending will still go way down. This is not a spending increase, it is less of a destructive, devastating cut than the full “sequester” would be next year. But it is still a cut, and it will still cost us jobs and economic growth. It will still be “awesomely destructive.”

And that is their plan. It will still let them campaign on “Obama’s terrible economy.”

This chart from Calculated Risk shows how government hiring pulled us out of previous recessions, which government firing is holding us in this one. Key point, Presidents Reagan, GHW Bush, Clinton and ‘W’ all increased public hiring to help get us out of recessions. But under Obama and austerity the public sector has lost 703,000 jobs.

However the public sector has declined significantly since Mr. Obama took office (down 703,000 jobs). These job losses have mostly been at the state and local level, but more recently at the Federal level. This has been a significant drag on overall employment.

So let’s take bets: do you disagree that Republicans are planning to campaign in 2014 by saying that the terrible economy is Obama’s fault?

PS: Some of these charts are from Three Charts That Show That Republicans Have Won The Budget War by Danny Vinik, who writes that “the fact of the matter is that the GOP has won the budget wars.” Let’s see if they take credit for the economy and terrible human pain they are causing.