Build The General Strike Movement To Change The World

Now that May Day is behind us, we must build the General Strike campaign. The next strike day, June 1, should be the culmination of a month of working toward the day of action.  This is the responsibility of everyone involved in the General Strike movement.

Join the next Popular Resistance General Strike call on Thursday, May 28 at 7:00 pm Eastern. Register at bit.ly/MayDayMeeting.

This is an ongoing campaign. We emphasize it is a campaign as campaigns provide ongoing opportunities to build the movement. The goal is to ensure that those running for office, those in office and those who make policy — including non-profits, corporations, and the media — cannot ignore the movement as we demonstrate our ability to make the country ungovernable.

To do this we need to build a movement that: (1) Creates national consensus for our demands, and (2) Involves enough people to be a mass movement that cannot be ignored. This requires people to act at local and national levels to build the movement as described below. 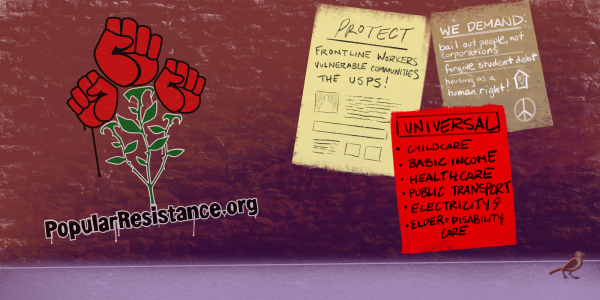 The foundation of movement building is popular education followed by organizing and mobilizing people. People need to understand what the problems are, why the current system won’t solve them and what will solve them. Movements have short, medium and long-term goals.

In the short term, we need to ensure that essential workers are protected from the virus and are paid well for taking health risks, that there are widespread testing and tracking of the virus, and that people receive enough income to survive the economic collapse in both unemployment and direct basic income payments. Another urgent need is to save the Postal Service in the next COVID-19 bailout by Congress.

Longer-term changes include universal healthcare through national improved Medicare for all, fair treatment of workers and living wages, family and sick leave as well as safe workplaces, a guaranteed basic income, remaking the finance system so we are not dependent on Wall Street but on public banks throughout the country, Congress taking back the constitutional power to create money and more. We need to end racial discrimination, injustice, and inequality in income, education, housing, incarceration, and other areas that have been further exposed by the COVID-19 pandemic.

Each of these goals is an opportunity to build a movement of movements by reaching out to people and organizations who are working on workers’ rights, healthcare, racism, inequality, housing, poverty, and other issues included in our demands. We need to understand how our issues are connected so that together we fight for all of them. For example, improving healthcare through national improved Medicare for All (NIMA) will reduce inequality and enhance the rights of workers. Currently, more than 10 million people have lost their healthcare due to more than 30 million becoming unemployed. With NIMA, healthcare will no longer be dependent on employment. It will cease to be a tool the bosses use to cut pay or threaten workers when they strike. And health is connected to social issues such as education, housing, access to healthy food, clean air and water and more.

A tool for learning how to organize and mobilize people in an effective way is the free Popular Resistance School “How Social Transformation Occurs.” This is a web-based school that includes eight classes and a detailed curriculum. We all need to become capable in building the movement. Please watch this series of classes and review the reading materials.

People can organize local General Strike Committees made up of people and organizations working on these issues. The committees will meet regularly, which can be done virtually through online platforms, to provide both education and to organize actions for the general strike, as well as creating local mutual aid networks to get through the pandemic and economic crisis.

We need to act with the intention of creating a national political consensus on the issues and building a mass movement. We should judge our outreach, organizing and actions by whether what we are doing is accomplishing those goals. We describe tools for movement-building in the final class of the eight-class web-based School for Social Transformation.

Your group can review the demands and analyze how you can reach out to and involve people and organizations working on those issues. Develop strategies to reach out to those groups and involve them. Your actions on June 1 could be designed to pull groups in, e.g. conduct an automobile picket line at Target, Whole Foods or Walmart to support the workers or conduct banner drops or hold signs near a hospital. Include information about how people who see you can get involved.

Between strike days you can also build solidarity by holding events online that bring people together and build relationships. This could include a book review, movie watching, or webinar. These can be used for not only building relationships but for outreach and deeper understanding of issues to achieve national consensus on our demands.

Art builds are a great way to form community and sharpen our messaging. With physical distancing, it is difficult to hold an in-person art build, but people can create art together online. This will coordinate messaging and create the images you want for your general strike action. If possible, there is a great advantage of making large pieces of art for actions, especially when the number of people is small.

Learning from Each Other

We should review the tactics used by our allies on the first General Strike day of action. There were car caravans with signs of movement demands. Some slowed or blocked traffic while explaining the action on video. Some drove around stores where workers were striking to show support. Traffic was slowed at ports and other distribution centers, especially places like Amazon Prime where workers were on strike. In all of our actions, we must realize we are the media and always include a social media component. 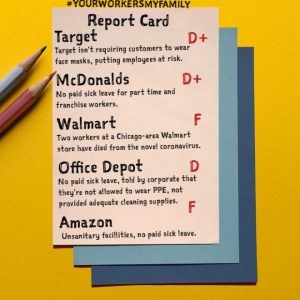 Some of the other tactics used include:

As COVID-19 develops, we will have to constantly learn from each other and change tactics. A tool used in direct actions is the OODA loop. This is the cycle of observe–orient–decide–act. In this way, we are always observing the environment to understand the constantly changing situation and deciding which tactics are effective. Constantly changing in response to new situations makes it more difficult for law enforcement, the government, and corporations to predict what the movement will do.

We do not expect the corporate media to cover the General Strike fairly. Of course, they will cover small right-wing protests calling for re-opening the economy because that serves the interests of the ownership class. Our call for transformational change that gives power to the people opposes the goal of funneling money to the top.

We need to join email groups on issues that relate to the demands of the movement so we can tell people and organizations in those groups about the General Strike, what it stands for and how to participate. We can also keep people informed of recent news and analysis of our demands.

On social media, we need to not only build our followers but also focus on people and organizations we want to reach. That means reaching out to advocacy groups, unions, media outlets, reports, public officials, and others who impact the national discussion. This is all part of building a national consensus in support of our demands.

Each day there is news from the movement or about movement issues. On Popular Resistance, we produce a daily digest that arrives in your email every morning at 6 am Eastern time. It includes 10 to 15 stories every day with a few lines about each story. When there is a story that interests you, you can click on it. and get the full story. You can copy the URL for the story and share it in your email networks and on social media. Sign up for the Daily Digest in the right-hand column on the front page of PopularResistance.org.

If we each are conscious and intentional about building our media capabilities than we can overwhelm the corporate media. This not only spreads our message but makes it difficult for the media to ignore us and to inaccurately report what we are doing. 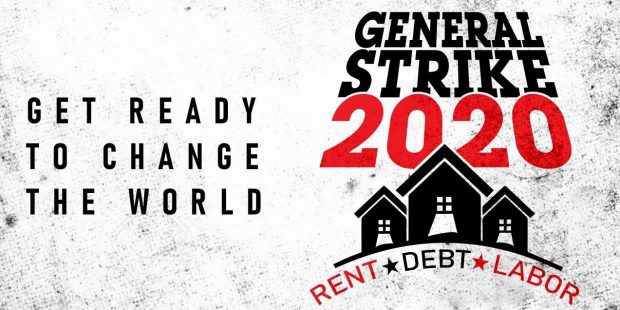 Building on Our Strong Start

Over 400 people signed up to be on the Popular Resistance organizing call before May Day and more than 150 participated. Other groups also held calls. Workers at major corporations took strike actions on May Day. There were rent strike actions in more than 40 cities before May Day and tens of thousands took part in May Day rent strikes. This response demonstrates that many people see the time is now for a General Strike.

If we do this work over the next few months, then in September and October when the 2020 election is in full swing, we will reach greater levels of action and the movement media will be stronger. This will ensure that our demands cannot be ignored during the election campaigns and will influence the national political agenda at a critical time. Beyond the election, we will show the next president and other elected officials that the people must be heard.

We cannot predict where we will be as a movement seven months from now, but it is possible our actions may escalate to weekly rather than monthly actions. This may even occur before Election Day. As a movement, we will need to decide what tactics will be effective in future months. Weekly protests, as the French Yellow Vest Movement is doing, will stop the economy and make the country ungovernable.

The potential of the General Strike campaign is something we cannot imagine at this stage of our development but the opportunity to build the power of the people and set the agenda for the 2020s is immense.