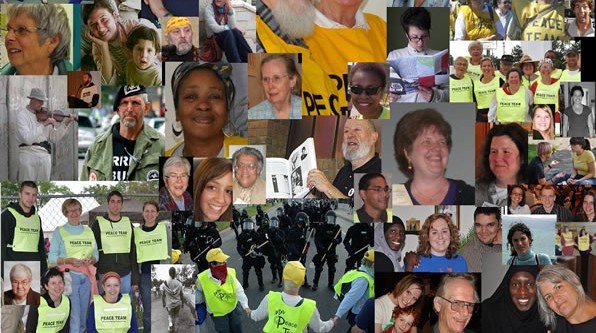 Building A Movement Of Peace Teams

Note: If you are interested in getting trained the skills and strategies for building a national movement of local peace teams, we have good news. MPT Is going to be going on a nationwide tour to do just that. You can find out more about where they will be at this link, and contact them if you would like to host them in your town.

How do we address violence: not only violence in our communities but violence from those who are supposed to protect community (aka “peace” officers)?

We need people who are trained in creating safe spaces, and the slightest hope that it might be possible to create such spaces—is what drives organizations like Meta Peace Team (MPT, formerly Michigan Peace Team). MPT’s goal is not to take sides, not even really to come up with solutions, but simply to create safe spaces where people might be able to deal with the challenges of conflict without violence.

From its very beginning in the 1980s as Michigan Faith and Resistance, through its years as Michigan Peace Team, MPT has sought to equip peacemakers to use their heads, hearts, and hands—to find their personal centers, to be scholarly activists, and to do something about what they learn and experience. These peacemakers are based out of Lansing, MI, but they have worked beyond the state’s borders almost from the very beginning. To reflect this, the group finally took the step this year of changing its name to Meta Peace Team—chosen because meta calls up ideas of transforming relationships and of going beyond borders that are central to MPT’s vision for its work.

Meta Peace Team is conceptualized as a way to plan, train, and deploy peace teams where invited both domestically and internationally—again not to take sides or to “fix” problems, but to create space for people to come up with their own solutions to conflicts. The teams are made up of people who are trained in violence de-escalation techniques, committed to the internal work of personal centering so as to be able to overcome fear in the midst of violence, and willing to work collaboratively and with consensus processes.

They believe that conflict per se can be constructive but that the use of violence to deal with conflict tends to be destructive—and, accordingly, they see the core of their mission as protecting people from violence no matter where that violence comes from or toward whom it is directed. And, they “walk their talk.” They do not take sides, and they don’t invite themselves in to handle just any situation—although they might reach out and make contact with people on the ground to see if help is needed.  As MPT staff member Mary Hanna quips, the teams are not there to quell disturbances but to protect against violence: “Sometimes people think of us as parade marshals – we’re not there to make sure your event goes swimmingly, we’re there to make sure nobody gets hurt.”

I had a chance to speak with Mary a few weeks ago, and she shared her own story of getting involved with MPT. Mary’s exposure to active peace work began during her time as an undergrad student at Michigan State University, where she was fortunate enough to find herself “in the company of prophetic peacemakers”—people who really lived out their convictions and encouraged her to do the same. She began to volunteer with MPT while working first for a community mental health center and then for a peace education center, and finally switched to full-time work with MPT as her involvement with the organization continued to build. Mary’s official job title with MPT is “Operations Manager,” but as she explains it, she does a little (or a lot!) of everything “to make sure that we can keep going as an organization.”

Mary was able to clarify for me some of the mechanics of MPT’s peace team deployment, as the organization follows a unique model of short-term deployments to both domestic and international situations. Domestic deployments, she describes, are typically very short (1-3 days) and often revolve around single events—past examples have included everything from Ku Klux Klan rallies to Gay Pride parades. Participants in domestic teams need to have attended at least eight hours of training with MPT, and larger deployments are often broken up into smaller autonomous teams for increased flexibility. International deployments are longer, ranging from roughly three weeks to about three months. Preparation for these team members is much more intensive and includes regionally specific training, strategy-building and personal/team awareness exercises, and even simulated experiences such as those one might encounter during the deployment. Mary explains that the goal of all this is to send people who are personally centered, able to work together cohesively, and aware of the general dynamics (at the very least) of the situation they’re about to enter – the hope being that such a team could be a help rather than a hindrance to the local community.

I was curious about the three-month upper limit to international deployments, and Mary helpfully points out that the most common site for MPT international deployments has been the West Bank—and that three months is the longest duration for which one can obtain a visa to travel to the West Bank. This deployment length may shift as MPT engages with communities in different parts of the world, but it is likely to remain relatively short in comparison to the international peace team deployments of other organizations. Mary recognizes that this (the shorter duration) poses certain challenges to the way peace teams operate on the ground, but she argues that the more condensed timeframe also lowers some of the barriers to participation in a team and thus allows for broader investment in the concept. She adds that in this context the capacity for continuity, relationship-building, and on-the-ground familiarity comes from peace team members called “anchors” who return to a region repeatedly (and at overlapping times)—allowing MPT to maintain a constant presence in the community over the course of different peace team deployments.

Efforts to scale up this concept of peace teams have brought MPT to the next stage of its journey as a founding member of the Shanti Sena Network of North American peace teams. This network is composed of a variety of organizations across the U.S. and Canada, and it was inspired by Gandhi’s idea of a shanti sena, or ‘peace army.’ Mary explains that “when something big (violent) was happening, we wanted to be able to deploy peace teams as quickly and as effectively as the military deploys their troops and as the police deploys officers.” To do this, the groups need to develop a standardized training and a network to mobilize people in response to violence—to get those trained teams to the places where they are needed, and to do it quickly. They are beginning by coordinating their curricula to include a basic training that all agree is foundational for peace team work, and they hope that this coordination and cooperation in training will also start to build up the networks of relationships that can later be used to mobilize and dispatch trained teams to situations where violence threatens. Over the long haul, they hope to bring Gandhi’s vision of a ‘peace army’ to life in North America.