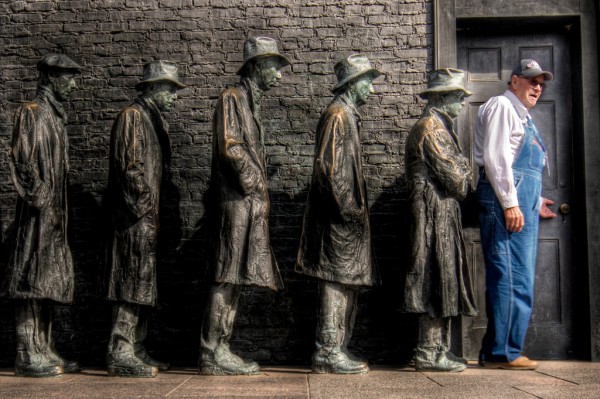 Building A New Populism In The Era Of Trump

With a little good faith, liberals and conservatives can work together to tackle the real issues putting the American Dream out of reach.

Imagine you’re standing in line for the American Dream.

You work hard, sometimes in dangerous jobs. You lead a moral life. But the line is stalling, even moving backwards. Yet you see newcomers up front — some of them immigrants and people of color.

Maybe you’ve worked all your life alongside African Americans and Latinos — more than most northern liberals have — but when you complain about people cutting you, those liberals call you racist. Worse still, they seem to look down on you because of your Christianity, or your Southern culture.

That’s the worldview sketched out by sociologist Arlie Hochschild, a liberal professor who spent five years interviewing Louisiana Tea Party activists. She made friends with them and stayed in touch as they got involved in the Trump campaign, an experience detailed in her new book Strangers in Their Own Land.

When Hillary Clinton called Trump supporters “deplorables,” Hochschild’s Tea Party friends heard a put-down they suspect liberal elites say about them behind closed doors all the time. Trump, on the other hand, never dismissed them as racists or rednecks. Instead, he blamed their problems on the line cutters.

Unfortunately, neither Clinton nor Trump got at the real reasons the line isn’t moving.

The fact is, over the last three decades, both Republicans and Democrats have helped shift America’s wealth to a small segment of rich people and global corporations. They’ve each supported a corporate “free trade” agenda and failed to do anything more than tinker with tax rules that accelerate inequality.

The resulting economic insecurity has given rise to both progressive and regressive forms of populism.

On the one hand, the Bernie Sanders campaign focused on how the rigged rules of the economy benefit billionaires and transnational corporations. On the other, Trump deflected blame away from the real holders of power and onto less powerful groups.

In the general election, when Hillary Clinton became pegged as the status quo candidate, it shouldn’t have surprised anyone that Trump’s regressive populism won out.

But Trump’s plans to deport immigrants while cutting rich people’s taxes will almost certainly fail to address the underlying concerns of the non-wealthy voters who elected him. That leaves room for a more progressive populism to get the stalled-out line moving again.

That means building coalitions between urban and rural workers to raise wages and expand opportunities at the state and local levels. At the federal level, campaigns to tax the wealthy, create jobs by building new infrastructure, and provide debt-free education could win allies among Trump supporters.

Meanwhile, progressive populists should engage with Trump’s white supporters to explain that millions of black, Latino, and Native workers are stuck in line for many of the same reasons they are. Together they’ve all been held back by the 1 percent, though racism has made things far harder for people of color.

Fighting racism is essential. But liberals shouldn’t assume that Trump supporters are too racist, too dumb, or too manipulated by the Koch brothers to vote in their real economic interests.

Instead, like Hochschild did in Louisiana, they should take the time to understand the deeper economic and cultural reasons people might distrust the Democratic Party establishment and the broader liberal agenda.

Because we’re only going to get the line moving again when we realize we’re stuck in it together.