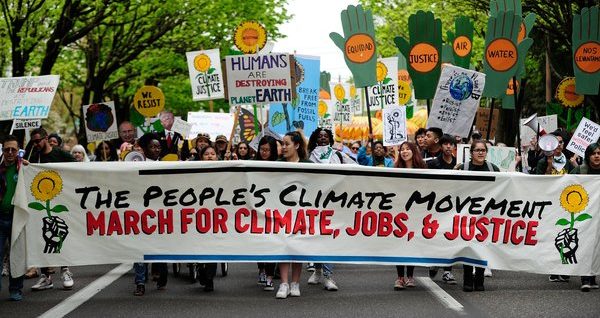 Building On Victories For A Stronger Climate Justice Movement

While the climate justice movement has been winning important victories, stopping and slowing pipelines and other fossil fuel infrastructure, and putting the future of fossil fuels in doubt, the political system, long connected to the fossil fuel industry, is still fighting the urgently needed transition to clean sustainable energy. Both President Trump and former Vice President Biden put forward energy plans that do not challenge fossil fuels.  The only candidate with a serious climate plan is Green Party candidate Howie Hawkins.

The movement needs to build momentum from these successes for more actions to stop fossil fuel infrastructure. As the reality of the climate crisis hits more people, fossil fuels will become high-risk investments while the cost of solar, wind, thermal, and ocean energy is declining. 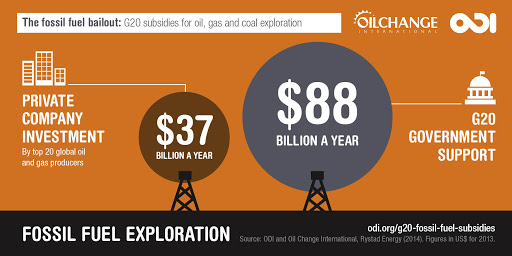 Propped Up by Massive Subsidies

The fossil fuel industry is being propped up by massive subsidies without which its extinction would be faster. A 2019 IMF report found that $5.2 trillion was spent globally on fossil fuel subsidies in 2017, the equivalent of over 6.5% of global GDP. The Organization for Economic Co-operation and Development found “the $649 billion the US spent on these subsidies in 2015 is more than the country’s defense budget and 10 times the federal spending for education.”

In the era of the climate crisis, COVID19, and recession, these subsidies are not justifiable. Christine Lagarde of the IMF has called for removing fossil fuel subsidies, noting the investments made into fossil fuels could be better spent elsewhere. She notes, “There would be more public spending available to build hospitals, to build roads, to build schools and to support education and health for the people.”

The era of fossil fuel domination is coming to an end. It is up to people to organize to hasten the transition to a clean, sustainable energy economy. The deeply embedded fossil fuel industry can be defeated. The people have shown they can make it impossible to build fossil fuel infrastructure.

In early July, three pipeline projects suffered major blows. Their defeats were the result of more than a decade of activism by thousands of people. People risked arrest, went to jail, confronted police, petitioned, lobbied and litigated, slowing the projects down and making it impossible to profitably build pipelines and other infrastructure.

The Atlantic Coast Pipeline was canceled on July 5. On July 6, a federal court Dakota Access Pipeline. Unfortunately, a court of appeals ruling allows the pipeline to continue to operate while the litigation is resolved. That night, the Supreme Court let a Montana court ruling on the Keystone XL pipeline stand, meaning the project cannot be built until much of the litigation is settled.  Construction of the Keystone XL is blocked until 2021. Joe Biden has pledged to oppose the Keystone XL. If he is elected, activists will have to hold him to that promise.

The Keystone XL pipeline was designed to carry Alberta’s dirty tar sands oil across the US-Canada border into Nebraska and has been fought since 2011 by the Tar Sands Blockades, Bold Nebraska and others.  The Dakota Access pipeline was opposed by the Standing Rock Sioux uprising that brought Indigenous nations and climate activists together in a months-long struggle, often facing violent police repression. The DAPL is transporting fracked oil from North Dakota’s Bakken Shale basin to Gulf Coast refineries. And, the Atlantic Coast Pipeline would have carried fracked gas through the Appalachian Mountains from West Virginia to North Carolina. All along the route, people aligned to oppose the project. Litigation and delays forced the large companies, Dominion and Duke Energy, to cancel the project even after investing $3.4 billion in it.

In another defeat that will empower climate activists, on June 30 in a 10 to 1 decision, the US Court of Appeals for the DC Circuit ruled against the Federal Energy Regulatory Commission (FERC) to allow people impacted by fossil fuel infrastructure to sue 31 days after filing an administrative appeal on a permitted project. FERC had been preventing litigation by delaying the 30-day administrative appeal an average of 7 months and up to 15 months during which pipelines were being built.

FERC has been critical for the fossil fuel boom of the Obama and Trump eras. FERC and the fossil fuel industry act as one as all FERC funding comes from industry fees, not taxpayers. According to Ted Glick of Beyond Extreme Energy, which has been battling FERC for a decade, in an interview on WBAI, the vast majority of FERC commissioners since it was founded in 1978 have come out of the fossil fuel industry and many go back to the industry after leaving FERC. The same revolving door exists for many staff members too. FERC and the oil and gas industries have been working together to prevent court review, but with this new DC Circuit Court decision, that should stop.

All of these victories were the result of grassroots struggles by the climate justice movement. As one activist tweeted, “In case you thought that small actions don’t matter . . . this is a result of every tree-sitter, each person who chained herself to a piece of equipment, sat at an air board mtg, blocked a site.” Campaigns that challenge infrastructure at every turn make a difference. These victories are part of a nationwide uprising against fossil fuel infrastructure and the resultant thievery of private property by abusing eminent domain, the pollution of farms, rivers and forests and FERC’s steamrolling over communities.

The movement is making pipelines more expensive to build. Increased costs combined with low fossil fuel prices and low costs for solar and wind energy are making the industry a risky investment. There have been hundreds of bankruptcies. Symbolic of this is the recent bankruptcy of Chesapeake Energy, which was a leader in the fracking boom. It started to decline after one of the CEOs, Aubrey McClendon, died in a car crash in 2016 after being charged with corruption. Steve Horn reports on their ongoing corruption, writing, “Just a month ago, in fact, Chesapeake executives showered themselves with $25 million in bonuses, despite the company tumbling toward bankruptcy.”

USA Today reported that  24 oil and gas companies have already filed for bankruptcy since the COVID19 pandemic and recession began. The Wall Street Journal reports that potentially 200 fracking corporations could declare bankruptcy in the next two years if the price of oil stays at current levels.

The Fossil Fuel Industry is Not Defeated

Fossil fuel industry ties to presidents have run deep for decades. Both George H. W. Bush and his son, George W. Bush, were oil men. President Obama, who made the US a top producer of oil and gas, bragged, “We’ve added enough new oil and gas pipeline to circle the Earth and then some.” During his term, over a period of two years, the US built 29,604 miles of new pipeline. According to NASA, the equatorial circumference of the Earth is 24,873.6 miles.

President Trump, who denies climate change, is seeking to expedite the approval of oil and gas infrastructure. Former Vice President Biden said he will protect the fracking industry and opposes the Green New Deal. His recently announced climate plans do not confront the fossil fuel industry.

The Trump administration has issued a proposed rule to undermine the 50-year old National Environmental Policy Act (NEPA) by not requiring any consideration of climate impacts as part of the review of fossil fuel infrastructure. His proposal will play out over months or years during a public comment process. If it is approved, litigation can be used to stop it.

Trump is building on the work of the Obama-Biden administration that issued executive orders to speed up environmental reviews and did not include climate considerations in NEPA reviews until his final year in office. Their administration allowed large pipeline projects to be broken into small segments to skirt the NEPA review. Through the signing of the FAST Act in 2015, which led to the creation of a Federal Permit Improvement Steering Council, federal permits and the NEPA review process were streamlined.

Biden is doubling down on fossil fuels and trying to confuse people with the fraudulent phrase of “net-zero” emissions, which is a shell game that will not cut fossil fuel production. He is calling for investment in carbon capture utilization and sequestration to claim he will offset carbon emissions, but this is a political fraud as the technologies are unproven. Even inside the DNC, this strategy is questioned by their Council on the Environment and Climate Crisis, which opposes reliance of offsets and asks, “Why would we rely on it when we already have much less expensive, proven, clean green technologies?”

The movement must be clear in its demand to replace fossil fuels with solar, wind, and other clean sustainable energy sources. We must demand policies that are consistent with the reality of the climate crisis requiring urgent action.

Building On Our Victories

The recent victories indicate that the more we show our determination, risk arrest, challenge projects in the courts and build the case against fossil fuels in the era of climate crisis, the more infrastructure projects will be shelved. For those projects currently underway, the movement must continue to challenge them at every turn using the creativity and tactical variety that come from a movement composed of a broad base of people with different backgrounds, experiences and concerns.

The profitability of pipelines is already in doubt due to the strategic nonviolence of the movement and the changing energy market. Even with Trump and Biden mouthing support for the industry, they will not be able to overcome the realities of the market failure, the climate crisis and that people want funds spent on public health, remaking the economy and transitioning to a clean energy economy.

The nationwide uprising against racism and the movement against pipelines already have close connections due to environmental racism and alliances with Indigenous struggles. We need to make these cross-issue relationships stronger.

The economic collapse is an opportunity to remake the economy with the Green New Deal as the centerpiece of massive job creation, investment in education and the development of new industries. There is a growing labor uprising with PayDay Report tracking more than 900 wildcat strikes since March 1. Workers need to understand that confronting climate change will create 30 million good-paying union jobs and the Green New Deal is key to rebuilding the economy.

The climate movement against fossil fuels has already shown the ability to create this broad movement. Native Americans, climate scientists, farmers and ranchers, big environmental groups, veterans and activists all came together for the first time in some of these struggles. Future efforts can link climate justice, anti-racism, and workers’ rights work, as well as the anti-war movement because the US military is the biggest polluter and fossil fuel user on the planet, to create an unstoppable movement no matter who is the next president.