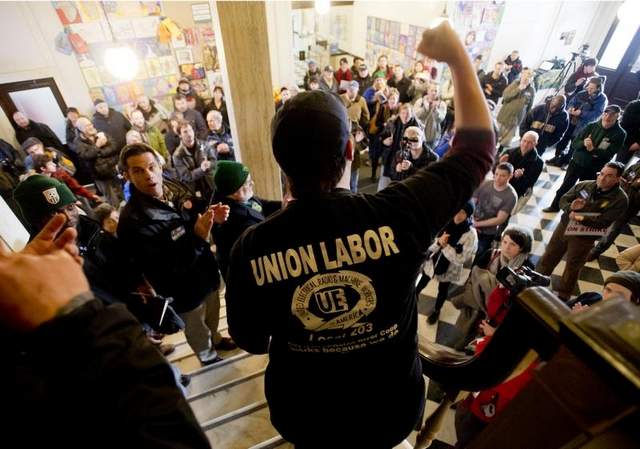 Supporters of striking drivers with the Chittenden County Transportation Authority took to the stairwell outside the Contois Auditorium at Burlington’s City Hall, chanting, “Get up, get down, Burlington’s a union town,” while the council was in executive session over the first item on the agenda at its special meeting Wednesday.

The second of the two agenda items Wednesday evening was an update on the CCTA bus drivers’ strike from a CCTA representative and public comment on the issue. Part of the discussion was a resolution that would pressure the two sides to settle their differences through binding arbitration, which uses an independent arbitrator who would make a recommendation after hearing the two sides two which everyone would be bound, or any other means necessary.

The CCTA drivers have been on strike for about 10 days, halting bus transportation for their approximate daily 9,700 riders, including 2,400 local school children.

The council discussed the specific wording of the resolution, ultimately passing an amendment to remove the words “binding arbitration.”

The amended resolution passed with only one person opposed. Also, they included the recommendation from the mayor that the a represenative from CCTA Board of Commissioners meets with the council every two months to give an update on improvements to the work environment.

Chapin Spencer, a member of the CCTA Board of Commissioners, first spoke to the council to present three options for resolving issues – the two sides could enter into binding arbitration, the union could present a counter offer to a proposal presented Saturday or the union could vote on that offer.

“I want to assure you that CCTA board of directors is engaged and responding,” Spencer said.

During the public comment period of the meeting, at least 30-40 people commented. None were in favor of binding arbitration.

After hearing the public statements, both Ayers and Paul asked to have their names removed as co-sponsors of the resolution.

Three progressive councilors — Rachel Siegel, P-Ward 3; Vince Brennan, P-Ward 3; and Max Tracy, P-Ward 2 — as well as progressive councilor-elect, Selene Colburn of Ward 1, issued a public statement in support of the drivers upon the announcement of their strike on March 17. Tracy said Tuesday evening that he would not be in support of the resolution Wednesday because binding arbitration is the main option urged.

“I think it’s a contradictory statement,” Tracy said. “It’s a position that’s been clearly rejected by the drivers, but now is being taken on as this supposedly neutral position. It is not.”

President Shannon said before the meeting Wednesday she does not think that the resolution takes a side, and the main goal of the resolution is to get the drivers back to work.

“I think it’s very important for a lot of people in Burlington to get the buses running again,” Shannon said. “We want to weigh in to make a statement that it’s important to us and we need this to come to resolution. There’s different ways it could come to a resolution, but ultimately, we need people who are staying at the table and continuously working towards resolution.”

Councilor Knodell, who did not take the position of the rest of the progressives on the council, said before the city council meeting that she has received mixed feedback from the public, including criticism from supporters of drivers on the “We Support the CCTA Drivers” Facebook page. Like Shannon, Knodell said she did not see her support of the resolution as taking a side.

“I think in matters of collective bargaining that are not our business, this is not the city’s contract to bargain, and that it is the best course of action to basically stay out of it and kind of uphold the process but not to take any side or the other,” Knodell said. “These matters are very complicated and there are a lot of different kinds of aspects of the contract, and the ultimate goal is to have healthy bargaining in which neither side gets everything that they want, but each side kind of walks away with what they really had to have.”
The council was split after public comment regarding the resolution. Paul motioned to have the resolution removed from the agenda completely, but the motion failed 7-5.

Tracy asked Spencer, a CCTA commissioner, if he supported binding arbitration as a solution, but Spencer said he was more in favor of both parties working together with a mediator to come to a solution.

Councilor David Hartnett, D-Ward 4, said that though he did not agree with binding arbitration as a solution, some resolution had to be passed by the council to put pressure on the two sides to come to an agreement.

“To pull this resolution off the table would be a huge mistake,” Hartnett said. “We need to stop playing politics with this.”

Mayor Miro Weiberger recommended amending the resolution so it would require Spencer and his commission to report back to the council every two months on the attempts to change the management culture the council had heard about.

After almost three hours of discussion, Brennan asked to amend the resolution to remove the words “binding arbitration or other alternative means,” so the resolution would express that an agreement should be reached as soon as possible.

Main sticking points between the Teamsters Local 597 bus drivers’ union and CCTA management have been the structure of schedules, the employment of part-time workers and concerns around work rules.

Negotiation for a new three-year contract for drivers have been happening for almost a year.