‘Business As Usual Is A Death Sentence’: Hundreds Of Youth Activists Sit In At DNC Headquarters To Demand 2020 Debate On Climate Crisis

By Jake Johnson, Commondreams.org
June 26, 2019
| Resist!
‘Business As Usual Is A Death Sentence’: Hundreds Of Youth Activists Sit In At DNC Headquarters To Demand 2020 Debate On Climate Crisis2019-06-262019-06-26https://popularresistance-uploads.s3.amazonaws.com/uploads/2017/12/popres-shorter.pngPopularResistance.Orghttps://popularresistance-uploads.s3.amazonaws.com/uploads/2019/06/dnc_climate.jpg200px200px

Above Photo: The youth-led protest comes just over 24 hours before the first of a dozen scheduled 2020 Democratic primary debates is set to take place in Miami, Florida. (Photo: Sunrise Movement) 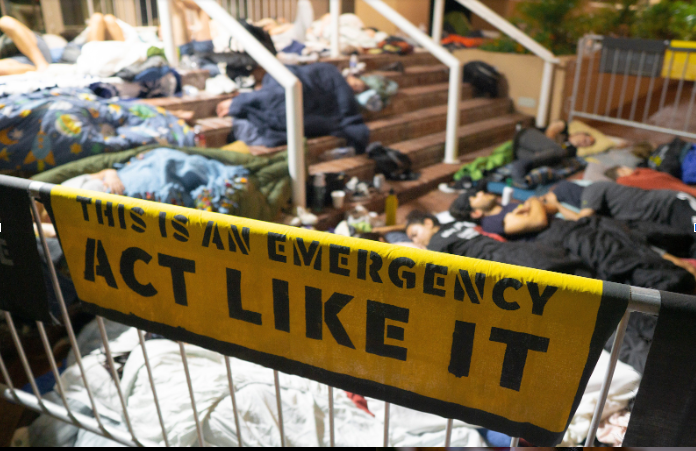 Sunrise reports in a mailing that: “They’re staying there through the day and holding a debate watch party on the DNC steps. They’ll make sure the Democratic leadership knows that the eyes of the nation are on whether they treat climate change like the emergency it is at tonight’s debate.” (Emphasis in original). They are urging people to:

Sign up to attend one the hundreds of watch parties Sunrise hubs are hosting around the country this evening.

Or participate from home using this guide to help flood social media with the questions the DNC isn’t going to ask.

“This is an emergency and it’s past time that Tom Perez and the Democratic Party start being democratic.”

Hundreds of youth activists held a sit-in at the headquarters of the Democratic National Committee on Tuesday to demand a climate-specific presidential debate that treats the planetary crisis with the urgency and seriousness it deserves.

“People everywhere are hurting from pollution and climate disasters, yet our political and media establishment routinely ignores these crises,” Destiney Lee, a 22-year-old Sunrise Movement activist who took part in the protest, said in a statement.

Agreeing to host a debate centered around the climate emergency, Lee said, is “the absolute least” DNC chair Tom Perez can do.

“At a climate debate,” Lee added, “we can press candidates on their plan to prevent the collapse of civilization as we know it and ensure my generation has a stable climate, clean air and water, and good jobs.”

.@DNC: “We aren’t here because we had nothing to do today, we’re here because we’re afraid for our future. Show us you’re serious about our lives, show us you care about the American people, and just hold that #ClimateDebate it’s that simple.” —Destiney Lee pic.twitter.com/hdqyvFncTm

The youth-led protest comes just over 24 hours before the first of two scheduled 2020 Democratic primary debates in Miami, Florida is set to take place Wednesday against a backdrop of a 17,000-acre wildfire in the Everglades. The DNC scheduled a dozen primary debates overall.

Spurning demands from grassroots advocates, leading environmentalists, and presidential candidates, Tom Perez announced earlier this month that there will not be a debate specifically dedicated to the global climate emergency.

Perez’s decision sparked outrage at the time, and youth climate leaders are still refusing to back down.

“I’m old enough to know when the adults are talking about how they care about my future, but actually not taking any action or passing any laws to fight against climate change. And that is definitely not enough,” eight-year-old Havana said from the steps of the DNC headquarters in Washington, D.C.

Havana, 8 outside the @DNC
“I’m old enough to know when the adults are talking about how they care about my future, but are not actually taking any action or passing any laws to stop climate change. And that is definitely not enough.” We need a #ClimateDebate pic.twitter.com/LQwO1QeBXD

As Common Dreams reported earlier this month, Perez told activists that he cannot agree to host a climate debate because the rules are already set.

But activists argued the climate crisis is much more than a “single issue”—it is an existential threat.

“Tom Perez is telling us we can’t have a climate debate because that’s not how it’s been done before,” Sunrise co-founder Varshini Prakash said in a statement on Tuesday. “Business as usual is a death sentence for my generation and the billions of people who are already feeling the damages of the climate crisis.”

“This is an emergency and it’s past time that Tom Perez and the Democratic Party start being democratic,” Prakash added. “Their base, their candidates, and a growing number of state parties are demanding a climate debate. It’s time for Tom Perez to listen to the people and reverse the ban on any climate debates.”