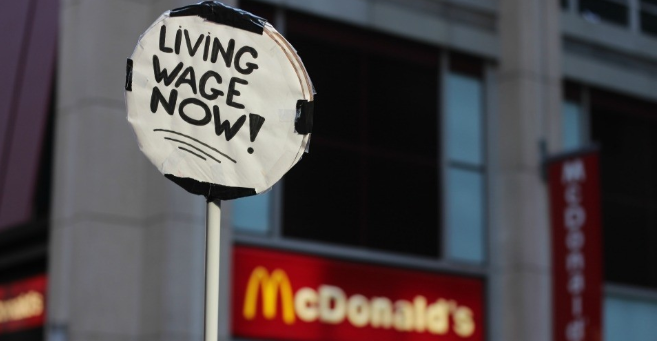 By the Best Definition, The Poverty Rate Should Be Tripled

Above Photo: A sign held during a Fight for 15 rally in Chicago in 2014. (Photo: Anna Waters/Flickr/cc)

Poverty should not be defined simply by the number of dollars that an American can scrape together each year. But poverty deniers won’t look deeper, because they don’t want to admit that anyone willing to work could be suffering in the richest country in the world. It’s easier to blame the poverty-stricken for their own misfortunes.

The Best Definition of Poverty

The World Bank defines poverty as “pronounced deprivation in well-being,” not only of material needs but also of health and education and security and public voice and the “opportunity to better one’s life” and the “capability of the individual to function in society.” Surveys of tens of thousands of people throughout the world found that “the poor did not focus on their material need; rather, they alluded to social and psychological aspects of poverty.”

The United Nations calls poverty the “denial of choices and opportunities, a violation of human dignity.” It’s not just a lack of money, but also the “lack of basic capacity to participate effectively in society.” Other sources refer to “relative deprivation,” a lack of both material and non-material needs, an absence of the “living conditions and amenities which are customary” in their societies, and a feeling of insecurity in people’s “homes, their health, and their jobs.”

Deprivation? The United Nations describes America as a nation that is near the bottom of the developed world in safety net support and economic mobility, with its citizens living “shorter and sicker lives compared to those living in all other rich democracies,” with the highest infant mortality rate and obesity levels in the developed world, and the world’s highest incarceration rate.

How It’s Gotten Worse for the Bottom Half

Wages have stagnated in the past forty years. The Consumer Price Index (CPI) and average hourly earnings have risen at approximately the same rate. But Pew Research notes that “what wage gains there have been have mostly flowed to the highest-paid tier of workers.”

Census data in 2011 showed that half of Americans were in or near poverty. According to a Pew analysis it got WORSE from 2011 to 2014, with expenditures rising and income dropping. Nearly half of our nation’s children under the age of 9 face poverty. Nearly half of gig workers in California face poverty.

Depressing news doesn’t sell on our news shows. So the struggles of the bottom half of America are downplayed, while the “booming” economy for the upper-middle class is highlighted.

The Absurdity of the Federal Poverty Thresholds

Poverty guidelines are dramatically out of touch with reality. Developed in the 1960s, they were based on the cost of food, which used to be a much greater part of the typical household budget. Today, an individual making $1,060 a month would not meet the federal definition of poverty, but even if that individual is lucky enough to find an apartment for $500 a month, that leaves less than $20 a day for food, phone, transportation, and clothing, and often for childcare and Internet service and a variety of regressive taxes.

According to the Congressional Research Service, “If the same basic methodology developed in the early 1960s was applied today, the poverty thresholds would be over three times higher than the current thresholds.”

The Effects of Deprivation

If poverty is indeed a “deprivation of well-being,” surveys and studies on American stress show a much greater level of poverty than skeptics would have us believe.

Stress! The American Psychological Association says 62% of us are stressed by money issues. A CreditCards.com survey revealed that 65% of Americans lie awake at night fretting over money worries. A Northwestern Mutual study found that money is the No. 1 cause of stress among Americans. According to Varo Money, nearly half of Americans don’t have any savings set aside to cover an unexpected expense like a job loss or medical problem. And now 800,000 federal workers are dealing with additional stress because of our incompetent national leaders.

Debt causes depression, migraines, ulcers, high blood pressure, disrupted sleep, even heart attacks. That is deprivation of well-being. That is poverty of both body and mind.