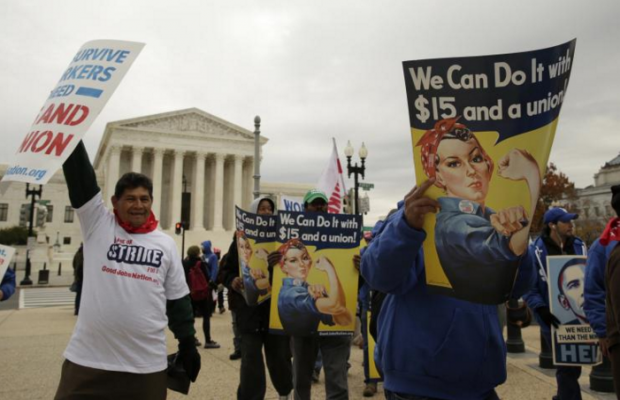 Above Photo: U.S. federal contract workers hold a strike rally asking for a $15 per hour minimum wage in front of the Capitol in Washington, D.C., Nov. 13, 2014.  Reuters.

U.S. Senate aides brown-bagged their lunches this week in support of cafeteria workers on Capitol Hill hoping to unionize. The aides were aligning themselves with a broader push by federally contracted workers to unionize and demand higher wages in one of the most expensive cities in the country.

Senate cafeteria workers associated with the movement have alleged that the company contracted to provide meals in the underbelly of the Capitol has illegally retaliated against their organizing efforts. The workers are employed by private employer Restaurant Associates, which is contracted to run a subsidized business that feeds senators and their staff.

“I thought it was great because it shows solidarity, it shows that they acknowledge us,” Charles Gladden, a cafeteria worker, said of the support they received from the aides, according to Al-Jazeera America. “They came down and supported us physically as opposed to just putting out a memo.”

What a success for Senate cafeteria workers. Thank you @SenSherrodBrown for your support! #IStandWithSenateWorkers pic.twitter.com/rgJcTVU394

The workers have had a small victory already. President Barack Obama issued a rule last year that raised the minimum wage for federally contracted workers to $10.10 an hour, up from $7.25. To achieve that goal, the rule was applied to new and renewed contracts issued by the federal government starting in January. The organizing movement held a nationwide protest in April, and Senate workers refused to work alongside other workers in federal buildings for an entire day. Those workers alleged they were not adequately compensated and didn’t receive enough raises for their time working in federal buildings.

“I’ve got quite a few bills,” Dewana Samue, a janitor who had worked in the Russell Senate Office for over a decade and only made $11.83 an hour. “It’s just really hard to maintain a home with the pay that I’m getting from them.”

The Senate cafeteria and other Senate restaurants were privatized in 2008. At the time, the operations were failing and losing a lot of money. The operations had drained as much as $18 million in 15 years, and were expected to lose another $2 million that year.