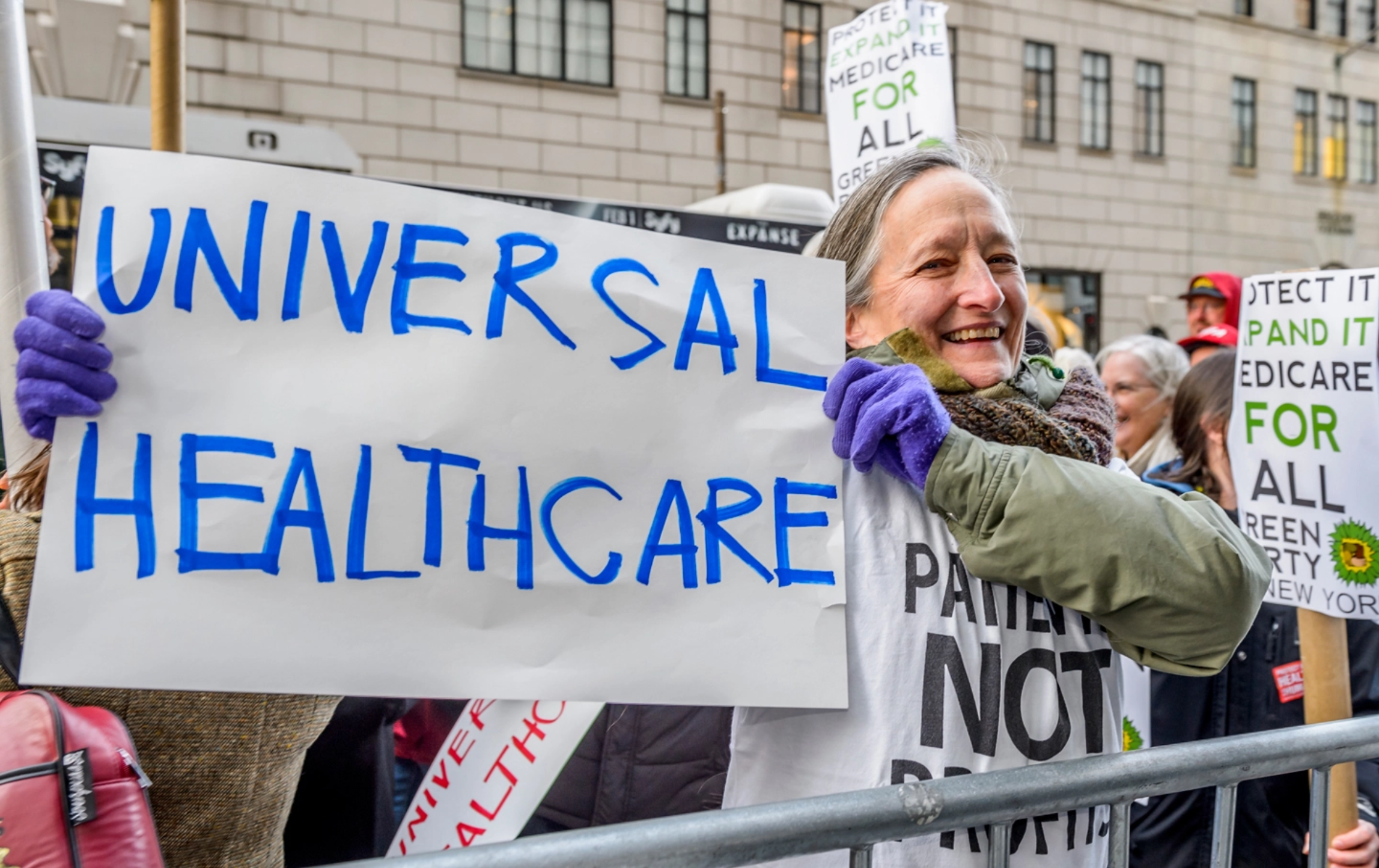 Above Photo: Sipa USA via AP.

No, Not All Paths To Universal Healthcare Are Equal.

As a bill to pass single-payer healthcare fails for the second time in the last five years, the question remains: What path should activists pursue to finally win universal healthcare in the U.S.?

Another effort to change the healthcare system in a U.S. state is dead in the water. This time, last week, lawmakers in California declined to vote on a measure whose proponents say would lead to a single-payer system in the state. Monday’s nonvote in California provides yet another instance in which a state cannot move forward with a proposal for single payer. But while supporters may argue that there just needs to be more political will, in reality, it is not impossible to achieve a true single-payer healthcare system on a state level. On a larger scale, the recent results in California show the futility of the current reformist strategy to win universal healthcare in the U.S. State-backed efforts for healthcare reform like those in California — or the push to pass the New York Health Act — have been touted by many on the Left as a path to winning universal healthcare on a national level, but they are actually counterproductive. The only true path to winning a single-payer program is by creating a movement for the federal government to enact universal healthcare on a national scale.

It is no secret to most that the U.S. healthcare system is a disaster. Per capita, the U.S. spends more on healthcare than any other country, and one in every 10 adults delays healthcare in the U.S. because of cost. Medical debt is the No. 1 cause of bankruptcy in the U.S., and even with the passage of the Affordable Care Act, which was touted by Democratic politicians to help solve the problems of healthcare in the U.S., health insurance is less affordable now than in 2015. Things have gotten no better during the Covid-19 pandemic, now that “50 percent of those who were infected with Covid-19 or who lost income due to the pandemic are now struggling with medical debt.”

Contrary to what we read in the bourgeois press, there is mass support for healthcare reform in the U.S. A majority of adults in the U.S. believe that the government is obligated to provide healthcare for all. While the majority generally agrees on the need for universal healthcare, there remains debate, even among sectors of the left, on how to actually achieve it. In this debate there are two main camps, both of which want universal healthcare but differ on strategy. One camp believes the path to winning universal healthcare is by creating a mass movement to pass reform on a national scale. A second camp also wants universal healthcare, but believes the best path is through winning reform in various states. Those in this camp argue that local efforts are easier for people to activate around, and once state-backed plans prove successful, it will be easier to extend coverage nationally.

The recent push is California could be said to fall into the second camp: part of an effort to win universal healthcare by achieving a “single payer” system in a state. According to the LA Times, California’s recently proposed bill

AB 1400 would have created a publicly financed healthcare system called CalCare, which could cost between $314 billion and $391 billion in state and federal funds, according to a legislative analysis. But supporters said residents in the state would ultimately have saved money when compared with paying for insurance, co-pays and deductibles.

This is the second time in the last five years that a single-payer bill has died in the California Assembly. Even though California Democrats say they want single payer, they did not even bring a vote on the recent bill, even though they have a supermajority. Why? Perhaps because Democrats want to prevent a vote on single payer so they can instead focus on expanding Medi-Cal, which would be more beneficial to various private for-profit entities. But while there is a debate to be had on why the bill hasn’t been able to pass the legislature, we should really question whether such efforts, regardless of corporate Democrat obstruction, have been helpful in the effort to establish a universal healthcare system.

This question has been written about extensively (see here, here, here, and here to start), but the fact is, if we truly want to win the healthcare system we want and need, we need to accept that it will not be possible to achieve on a state level. There are many reasons for this. For example, there are huge hurdles legally. As physician, public health advocate, and activist Margaret Flowers discusses in a piece for Health Over Profit:

A state would have to succeed in obtaining multiple waivers from the federal government and changes to federal laws to enact a state-based program. One federal law, the Employee Retirement and Income Security Act of 1974 (ERISA), which prohibits states from regulating employee benefits, is a major obstacle. States also face the hurdle of being required to balance their budgets, a barrier that doesn’t exist at the national level.

In fact, though California politicians continue their efforts to push a vote on a state system, a 2018 report out of the same state found that a state cannot create a single payer system on its own. Yet politicians continue to focus on trying to promote state-based plans. As a healthcare worker and advocate for universal healthcare in the U.S., I have interacted with many well-meaning activists flyering or presenting in support of state-based measures, such as those advocating for passage of the New York Health Act in NYC. I have been part of various email exchanges in which proponents of such efforts say, “State action anywhere builds support at the federal level, and vice versa.” These efforts dissipate energy that could be better used to build a movement for universal healthcare on a national level, the only level it can actually be realized. As activists are drawn toward wasting time advocating for these state-backed plans, it leads to a less robust movement for winning universal healthcare nationally. In turn, there is more space given for corporate healthcare forces to go on offensive, for example looking for ways to privatize Medicare by expanding marketing for Medicare Advantage plans.

I argue that organizers need to be honest with the people they are organizing. Calling state systems “single payer” or “Medicare for All” when the state will still include multiple payers is misleading. When activists understand that a state cannot implement these systems through its own actions but requires Congress to change federal laws, they will feel betrayed.

The issue has been further studied by consumer advocacy group Public Citizen. Flowers discusses the conclusions of Public Citizen’s “Roadmap to Single Payer” as follows:

A state can potentially make its healthcare system more efficient, but it cannot achieve a pure single payer system; thus, it can’t attain the bulk of savings that a single payer system would have. Within their budget constraints, states would be forced to raise the costs to individuals and businesses or lower coverage if they are not able to meet their needs for care.

So any attempts made at state-based reforms and called “single payer” could not benefit patients the way a national plan could, leading the effort to fail. As these systems fail, it only further discourages the movement. As Flowers notes, “This has happened in every past attempt by states to achieve universal coverage, as Drs. Steffie Woolhandler and David Himmelstein document in ‘State Health Reform Flatlines.’” This dynamic only ends up giving additional propagandistic “ammo” for those who oppose universal healthcare on the basis that it “doesn’t work.”

Undoubtedly, those who support a state-based road to universal healthcare coverage and those who support a national approach both generally want the same outcome: a universal healthcare system in the U.S. And while we can always have debates between comrades, the recent example in California, along with the countless examples from the past, show us that we should be working together to build a movement for universal healthcare at a national level. As the late activist Kevin Zeese wrote, “Some will continue to deny this fact — and it is a fact — but hopefully more will accept the reality that in order to create a single payer program the only path is for the federal government to enact National Improved Medicare for All.”

As Zeese noted, universal health care must be fought for on a national scale in order to win, period. But, after winning, the fight should not stop there. To be clear, we must build a movement for Medicare for All on a national scale as only a starting point. To eliminate a healthcare system that always prioritizes profit over life, beyond winning National Improved Medicare for All, we need the entire healthcare system nationalized under worker control.