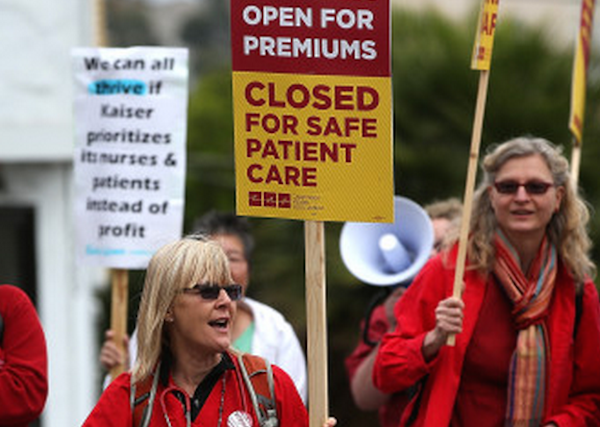 SAN FRANCISCO (AP) — As many as 18,000 nurses went on strike Tuesday and picketed in front of Kaiser Permanente facilities in Northern California to express their concerns about patient-care standards and Ebola.

The nurses, who are in the midst of contract negotiations, held red and yellow “strike for health and safety” picket signs. The two-day strike was expected to affect at least 21 Kaiser hospitals and 35 clinics and last until 7 a.m. Thursday.

Union officials said nurses are striking over claims there has been an erosion of patient-care standards in Kaiser facilities for months and that the company has failed to adopt optimal safeguards for Ebola.

“The nurses are telling story upon story of the lack of safety for patients, the lack of concern for patients,” RoseAnn DeMoro, executive director of the California Nurses Association, the union representing the striking nurses, said. “This isn’t about money. This is about something far deeper.”

Kaiser said calling a strike now, “just as we are entering flu season, and when the nation and our members are concerned about the risk of Ebola, seems particularly irresponsible.”

“The fact is, the various reasons the union leaders are giving for walking out are not supported by the facts — either in our medical centers or at the bargaining table,” Kaiser said in a statement.

The health care provider said it is well-equipped to handle any potential Ebola cases.

Kaiser will remain open during the strike, though some elective procedures and routine appointments may be rescheduled, company officials said. Replacement nurses are in place, union officials said.

California Hospital Association spokeswoman Jan Emerson-Shea said the nurses’ union, which has been in contract talks since July, is using the crisis to further its own agenda. The association represents and advocates for California hospitals, patients and communities.

“The union is in contact negotiations with the hospitals they are striking. They are using Ebola as a ruse,” she said Monday.

The association is working with federal, state and local agencies to assure the public that universal precautions are in place to screen and identify infectious diseases, Emerson-Shea said.

There are no confirmed cases of Ebola in California.