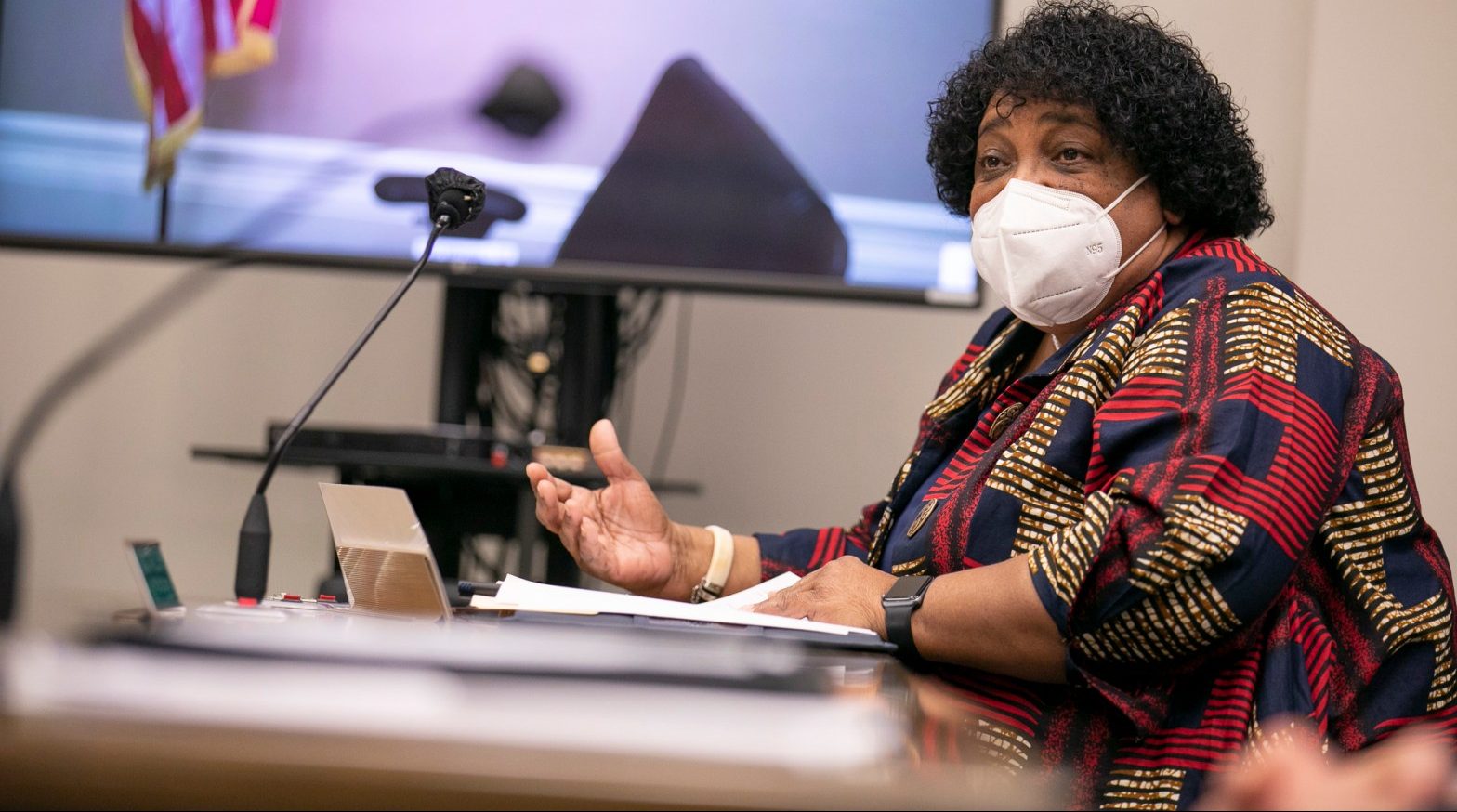 For more than three decades, Black members of Congress have introduced legislation to study the lasting harms of slavery on African Americans, and propose remedies. Year after year, the federal proposal languished.

Now, California is going it alone.

This month, California’s first-in-the-nation task force to study reparations met for the first time, kicking off a two-year process to study the consequences of slavery and systemic racism against African Americans in California.

The reparations committee of nine prominent lawyers, academics, politicians, religious and civil rights leaders — many of whom are descendants of slaves — will make formal recommendations on how the state should make reparations.

“You are here today not just to seek an answer to say was there harm, but your task is to determine the depth of the harm and the ways in which we are to repair that harm,” Secretary of State Shirley Weber, a former state Assembly member who introduced the legislation last year, told the reparations committee at the start of the six-hour meeting.

The task force’s kickoff came just more than a year after the killing of George Floyd sparked a summer of national uprisings against police brutality and racism, paving the way for a slate of new California laws aimed at addressing racial injustice. It also coincided with the 100th anniversary of the Tulsa Race Massacre, in which a white mob killed hundreds of Black residents and burnt a flourishing African American neighborhood known as “Black Wall Street” to the ground.

Against that somber backdrop, task force members alluded to controversial questions, long circulating in Black communities, that will for the first time get hashed out by state appointees in a public forum. How can a single state, which never formally sanctioned slavery, make amends for centuries of slavery practiced by Southern states and the federal government? How can California accurately quantify and repair centuries of racism on its own soil? Will the state seriously consider direct payments?

“Some asked us, ‘Why in California? Why not somewhere else? Why did we not do it in the South?’” said Weber. “If not us, then who?”

Here’s a look into the key themes the task force will grapple with:

What will the task force do?

The reparations committee, appointed by the governor and legislative leaders, will meet at least 10 times, though members discussed adding more meetings. Kamilah Moore, an intellectual property attorney and activist from Los Angeles, was voted in as chairperson. They’ll release a report of their findings after the first year and a second report on recommendations for reparations the following year. The Legislature would need to pass more laws to implement them.

During an hour-long virtual public comment session, callers from across California urged the task force to make its meetings more accessible. One person asked for meetings to be streamed on YouTube, TikTok and other platforms. Another asked for them to happen on weekends — the first was on a Tuesday — and called for 12 additional public comment sessions. Multiple callers urged a media campaign to educate Black Californians about the task force.

Digging into a dark past

The reparations committee is likely to dig up chapters of the state’s history unknown to many. Reginald Jones-Sawyer, a Democratic state Assembly member representing South Los Angeles who serves on the task force, likened the “truth-telling” process to recent viral videos of police violence. Staff of the California Department of Justice’s new racial justice bureau set the stage by presenting archival photos.

One photo showed Mifflin Gibbs, a Black civil rights activist from San Francisco who helped fund the legal case of Archy Lee, who was brought to California as a slave in 1857, but escaped. He was returned to slavery by a panel of California Supreme Court judges, which included Peter Burnett, a former slaveholder who served as California’s first governor and tried to ban Black people from the state. Lee eventually won his freedom.

While California joined the Union as a “free state” in 1850, the state soon enacted a fugitive slave law that allowed slaves as long as they were eventually sent back to the South. A question facing the task force is how culpable the state California was in supporting slavery.

“When you’ve been gaslighted for 400 years, truth is critical,” said Lisa Holder, a Los Angeles civil rights attorney on the task force.

DOJ staff presented evidence of post-slavery discrimination with lasting health and education consequences. They showed how a 1937 redlining map of Oakland mirrored a recent map of areas vulnerable to public health disasters, such as COVID-19. They also referenced continuing racial segregation in education, such as the Sausalito Marin City School District, which a court ordered to desegregate in 2019.

The reparations committee must also consider institutions that benefitted from slavery. DOJ staff offered the example of Penn Mutual Life Insurance Company, which wrote policies to insure slaves for slaveholders. Operating today in California, Penn Mutual had $3.7 billion in revenue in 2019, according to the DOJ.

A focus on mental health and housing

The mental health and housing consequences of slavery emerged as priorities for the task force.

“We’re all suffering to this day of PTSD from slavery — post traumatic slavery disorder,” said Jones-Sawyer. “It’s really important that we don’t forget the trauma that is still in us, hundreds and hundreds of years of us being abused, of us dying, being lynched.”

Another member urged the task force to pay attention to the other side: why people and institutions supported slavery and racism throughout history, and why some continue to oppose reparations.

“If we don’t go to the root cause, in terms of the human psyche and the human condition, we’ll only be doing window dressing,” said Dr. Cheryl Grills, a clinical psychologist on the task force who focuses on community healing.

Task force members discussed how redlining and other forms of housing discrimination have barred many families from accruing generational wealth and accessing stable housing.

State Sen. Steven Bradford, a Gardena Democrat who serves on the task force, gave the example of Bruce’s Beach, a Black-owned resort which the city of Manhattan Beach seized in the 1920s. Bradford has introduced legislation to return that land to Bruce family descendants — a potential model for state reparations.

Amos Brown, a civil rights leader and president of the San Francisco NAACP, pointed to more recent “urban renewal” programs that displaced thriving Black neighborhoods, like the Fillmore District in San Francisco, which “now only represents one block.” Brown, who is also a pastor, will serve as co-chairperson of the task force.

More than 2.5 million people who identify as Black or African American live in the Golden State, representing about 6.5% of the population in 2019. But they accounted for more than 40% of California’s homeless population.

One of the most controversial decisions ahead of the panel is whether to recommend that California send direct payments to any African American residents.

A growing number of U.S. cities  — Asheville in North Carolina, Evanston in Illinois and Providence in Rhode Island, among them —  have begun reparations processes, emphasizing remedies that reinvest in African-American communities. But all have shied away from sending direct payments, with leaders arguing that that’s the federal government’s responsibility.

Scholars split over the right approach.

Darity and Mullen said that in the international history of reparations — spanning post-Holocaust Germany to post-apartheid South Africa — only the U.S.’s formal apology and payments of $20,000 each to Japanese Americans interned during World War II counts as true reparations. (A Japanese American lawyer who helped lay the legal foundations for that process, Don Tamaki, also serves on the task force.)

Other scholars, including University of San Diego law professor Roy Brooks, have argued for reparations in the form of long-term investments in education, homeownership and wealth among African Americans.

The task force members may also be split.

Bradford suggested free education to descendants of slaves at Cal State and UC systems and first-time homebuyer’s assistance, as examples of what “reparations can look like without bankrupting the state.”

Still, Jovan Scott Lewis, a Berkeley geographer on the task force, said he’ll push for cash payments. Direct payments on the order of those given to Japanese Americans — or much larger, as many scholars have called for — could figure in the billions for California.

However, cash reparations may face fierce opposition from the public. A recent Reuters/Ipsos poll found that only one in 10 white respondents across the country supported cash reparations, while half of Black respondents endorsed it. Those who oppose reparations, including many Republicans in the U.S. Congress, often argue that it would take money from a group of people who never contributed to slavery and give it to another group who never experienced slavery.

Setting an example for the nation

California reparations committee members made clear that they hope their work will boost federal efforts to pursue slavery reparations.

Momentum is growing. Illinois may soon follow in California’s footsteps. This year, H.R. 40, the perennial bill in Congress to study reparations, has gotten closer to becoming law than ever before.

“As our country reckons with our painful legacy of racial injustice,” Gov. Gavin Newsom said at last week’s meeting, “California again is poised to lead the way.”