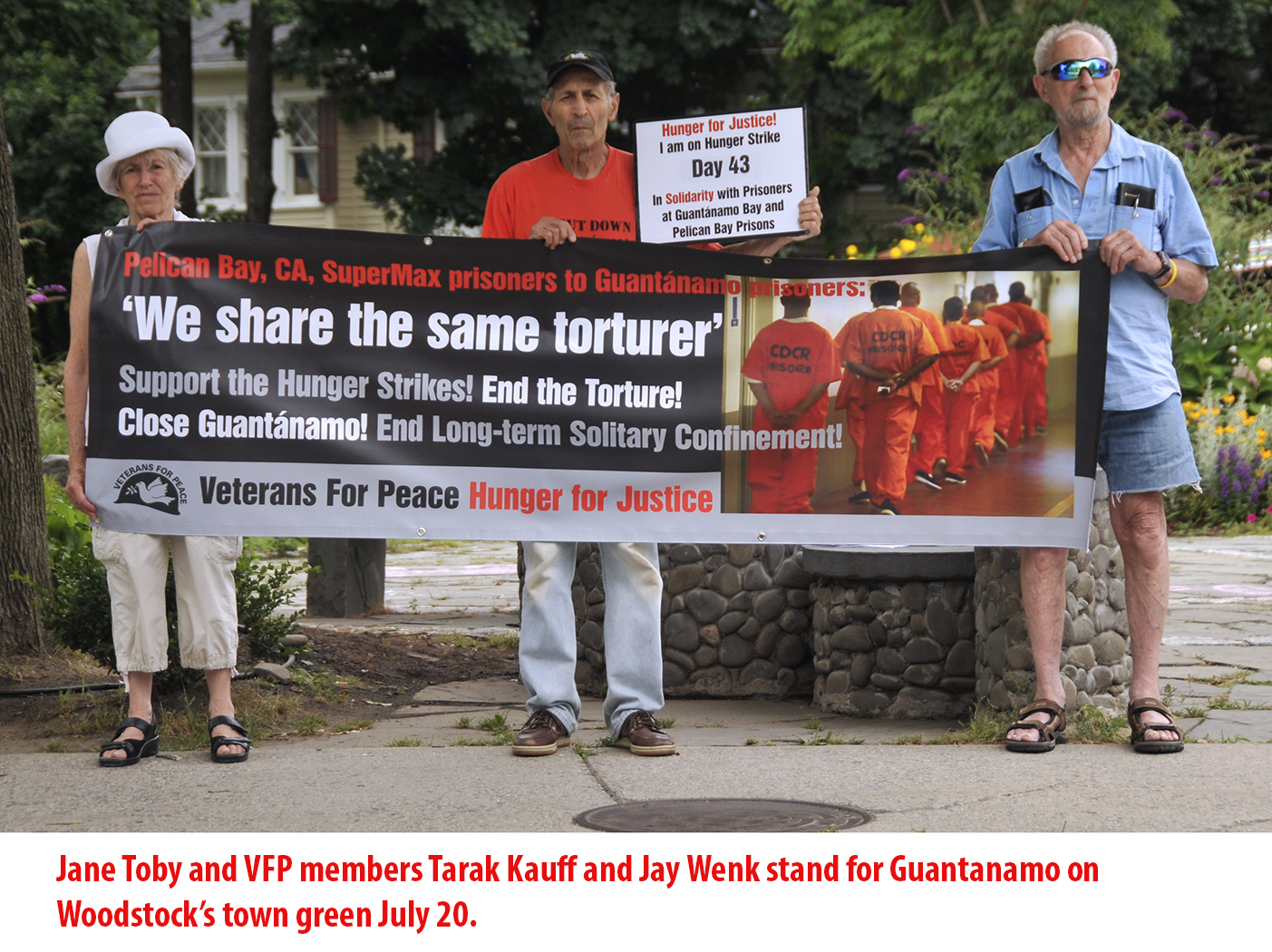 Call to Action: Hunger Strikers Urge You To Come To Washington July 30

US hunger strikers in solidarity with the prisoners at Guantanamo Bay and Pelican Bay Prisons are calling on you to join them in Washington, DC on July 30th to demand that the Guantanamo Bay prisoners are released and that the Pelican Bay prisoners’ 5 core demands are met. Congress will be preparing to break for more than a month, but to the hunger strikers, that is too much time to wait for a response to their needs. The torture must end now.

Tarak Kauff, Elliott Adams and Cynthia Papermaster have been on hunger strike since late May – early June. Each day, their bodies are becoming weaker, but their resolve is solid. They are making tremendous sacrifices to bring attention to the abuse of the prisoners. Now, they are asking you to show that you hear them.

Will you join them in Washington, DC on July 30th? Will you represent one of the prisoners and stand in their name?

There is a beautiful song by Solomon Burke which goes, “None of us are free, one of us is chained, none of us are free. There are people still in darkness, and they just can’t see the light. If you don’t say it’s wrong then that says it’s right. We got to try to feel for each other. Let our brothers know that we care. Got to get the message, send it out loud and clear.”

Let’s send a clear message that we care and that we will no longer tolerate the abuse and torture of prisoners. Congress and the Administration are already feeling pressure to act. A hearing will be held in the Senate on July 24, Obama appointed lawyer Clifford Sloan to be the envoy to close Guantanamo and in preparation for the Senate hearing, the cases of prisoners who have been neither charged with a crime nor cleared for release will be reviewed.

It is up to us to make sure that steps to send the prisoners back to their families and to finally close the shameful blight on the US, the prison at Guantanamo Bay, are carried out rapidly. There is no time to wait. Many of the prisoners have been on hunger strike for over 150 days. 86 of them were cleared for release three years ago. Some were picked up and sold to the US for rewards.

If you can represent one of the prisoners and come to Washington, DC on July 30th, contact Tarak Kauff at Tarak@popularresistance.org for more details.

Below is the text of a brochure that Tarak  (pictured above) is passing out to raise awareness of the prisoners:

I began my hunger strike on June 7, 2013, now 44 days on 300 calories or less, liquids only, inspired by Brian Willson and others. I am determined to be in solidarity with the prisoners at Guantánamo. If our hunger strike can bring attention to their plight and to a long tradition and pattern of cruelty and solitary confinement to prisoners here in the United States, if these actions somehow contribute to raising awareness and ending the Guantánamo prisoners’ time in hell, then our small sacrifice will have been worth it.

Currently 166 prisoners are being held by the U.S. government at Guantánamo Bay. We are told that they are “the worst of the worst,” terrorists who intend to do harm to U.S. citizens. In fact, they have not been tried or convicted of anything. Eighty-six of the prisoners have been cleared for release, it having been determined that they were never, in the first place, are not now, and most likely never will be a threat to the United States. But they are not being released and are held under such desperate conditions, with no end in sight, innocent of any crime except being in the wrong place at the wrong time, many of them simply turned over like chattel to the U.S. military for bounty, so that more than 100 prisoners are now on hunger strike.

Over 80 of them now weigh less than 100 pounds. The prisoners feel it would be better to be dead than to never again see their loved ones, children, their families, to undergo a hellish imprisonment that has no foreseeable end — feeling at least when their bodies die their souls will be free.

Guantánamo Bay prison is a blight on America’s soul. Having lived in the United States for all of my 71 years — am I not part of that soul? Are not the torture and hellish conditions perpetrated at Guantánamo Bay prison an abomination, a black mark on every U.S. American’s soul?

Hunger strikers are regularly strapped down, twice daily, tightly restrained to undergo force-feeding, which is excruciating and dangerous. The additional torture of force-feeding is meant to put down the nonviolent hunger strike revolt. The U.N. Human Rights Office has condemned force-feeding as a form of torture, a clear breach of international law. Of course that is nothing new; our government, including the present administration, has been violating international law and our own Constitution with impunity for a long time.

We have all become, by proxy and by inaction, a nation of criminals.

Jumah al Dossari, a 33-year-old Bahraini who was finally released after five years of unjust imprisonment and torture at Guantánamo Bay, wrote the following:

Take my blood.
Take my death shroud and
The remnants of my body.
Take photographs of my corpse at the grave, lonely.
Send them to the world,
To the judges and
To the people of conscience,
Send them to the principled men and the fair-minded.
And let them bear the guilty burden before the world,
Of this innocent soul.
Let them bear the burden before their children and before history,
Of this wasted, sinless soul,
Of this soul which has suffered at the hands of the “protectors of peace.”

Elliott Adams, former president of Veterans For Peace and a Vietnam veteran, now well over 60 days into his hunger strike, wrote:

“Late at night I can hear their desperation and their pain, it is not a sound, it vibrates though my body. At some point each one of us have to ask ourselves how long we will look the other way, turning away from what is being done in our name and being paid for by us. I can no longer listen to their cries. I have to do something  just to preserve my own integrity. If I do nothing, what kind of a person would I be? So I fast.”

“If the chains of … American indifference continue, hard and unabated, as they have currently been, then the men of Guantánamo Bay might remain there until hell freezes over.”—Diane Wilson, hunger striker for 58 days, author, An Unreasonable Woman

Currently the United States, with 4.6 percent of the world’s population, holds 25 percent of the world’s prisoners — more than 2.5 million people in more than 9,000 jails. At least 80,000 of these human beings,  no different from you and me, are held in solitary confinement for years in facilities such as Pelican Bay Prison in California and Angola Penitentiary in Louisiana. Thousands of prisoners in the Security Housing Unit at Pelican Bay spend years isolated for at least 22½ hours a day in cramped, concrete, windowless cells. Solitary confinement is torture. Over a thousand inmates at Pelican Bay are on hunger strike to demand humane conditions and a limit to individual solitary confinement, which sometimes lasts for decades.

If human beings of conscience take the risks, make the necessary sacrifices, step out of our comfort zones and do our utmost, we can end this disastrous reign of U.S. military and ­corporate-controlledgovernment. We are indeed our brother’s keeper.

When we open our hearts to the sufferings of others, we begin to feel that suffering ourselves and are compelled as empathetic human beings to creative and meaningful response. Take action.

Tarak Kauff has been active in antiwar, peace and justice activities since being discharged from the U.S.Army paratroopers in 1962. He organizes with the Veterans For Peace Direct Action Group and started the Veterans Peace Team. A member of the VFP Board ofDirectors, he was one of the founders of  WarCrimes Times, the VFP ­newspaper. He lives in Woodstock, NY.