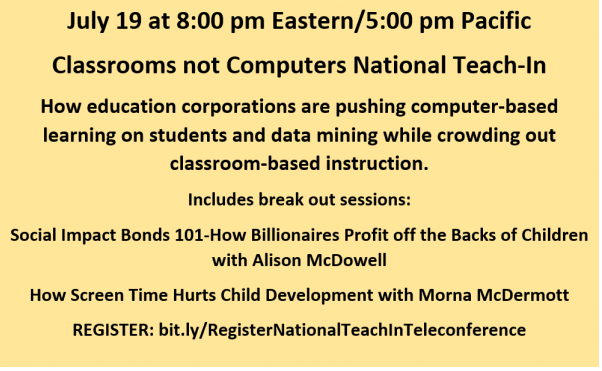 This campaign comes at a critical point in education. Those who profiteer off public education have a new way to make money from public schools. They want to replace teachers with computers and are using computers to gather massive amounts of data on students. This data -mining will be sold to marketers and potential employers and used by the government to control the youth of the United States and decide their futures. The call is Thursday night, July 19. Join the call to learn more about this important campaign.

Below is an interview with Mona McDermott, who co-founded the campaign. McDermott is a professor of education at Towson University and a founding administrator of United Opt Out. She has worked in and with k-12 public schools for 25 years. Her scholarship and research interests focus on democracy, social justice, and arts.

Why did you start the Classrooms Not Computers campaign?

We are entering a very dangerous time in US public education that threatens the role of teachers, public schools and the privacy of students. The history of education reform is long and complicated but most people are now catching on, as bad policy follows bad policy, decade after decade. They realize that the politicians and corporate CEO’s deciding what happens in schools have their own agenda and it is not one that benefits children or communities.

First, it was high stakes standardized testing, then it was the charter school takeover…and now its mass data mining of children throughout their educational career through technology. This is creating a massive profit center for corporate interests and destroying the privacy of children. We want to create a space where people can become informed how this latest “reform” is more far-reaching and destructive than anything we have seen come before.

Ed Reform 2.0 is a phrase I have been using to describe the new wave of data-driven privatization that has been unleashed by the passage of the Every Student Succeeds Act (ESSA) in 2015. When reformers talk about getting rid of the “factory model” of education and replacing it with something that is “personalized,” “twenty-first century,” and “future ready” these are marketing terms designed to fool school boards, teachers, parents and students to allow a system that profits off of the invasion of privacy of youth and undermining their education.

Describe the mass data mining developing in schools and how thus turns schools into profit centers.

Some of the ways that data mining occurs in classrooms are as follows:

–          students are monitored and surveilled through their computers

–          students will be assessed increasingly by artificial intelligence

–          students will have limited face-to-face instruction with human teachers

–          schools will significantly reduce the number of traditionally-certified educators

–          schools comply with workforce demands, despite the fact that automation makes employment projections uncertain in many industries

–          Use the language of project-based community learning to mask programs that are really little more than screen/computer- based learning programs that can be completed anywhere outside a classroom space, and for which when students complete a series of computer-based tasks, are rewarded with a digital badge of completion online in lieu of a grade given from real-time classroom work

All of this combined creates a mass database on each student that can be used to determine career path at a very early age, monitor emotions, used for marketing by corporations, used for control by government.

What will this do to teachers and public schools?

The misuse of computers and data gathering will essentially render classrooms and teachers obsolete. Research indicates that the majority of proponents of online delivery of curriculum, instruction, and assessment are members of The American Legislative Exchange Council (ALEC). ALEC has a long ideological history of attempting to destroy unions and privatize public education (which they refer to as government-run schools). Delivering education via a laptop, avatar and smart algorithms teachers are gradually being pushed out in favor of state policies (ALEC legislation) which require more and more classes be offered online. This is not only profitable for private online companies like K12 Inc, it accomplishes the goal of eradicating democratic public spaces for all students.

Computers are ubiquitous and necessary in today’s society. There are ways that students can gain access to computers and technological innovations while shielding them from data mining. Our campaign believes that strengthening privacy laws are insufficient. Those entities wishing to control and profit from education have always found ways around privacy laws. (For example, in federal legislation– ESSA– since companies are contracted to deliver instruction that is considered LEA’s local education authorities and as such are permitted access to student private information). Students can work with and on computers and programs while maintaining total and complete separation from the data mining done by companies. It is complicated but it is do-able. And we demand that education leaders make it a priority to reduce or eliminate third-party contracts with private online companies (return to the district, school and teacher-made resources instead of paying corporations like Kahn Academy to deliver content). We can also insist that providers FULLY disclose to all parents what data will be collected and how it will be used, allow parents the right to opt out of any online programming if they so wish. We want to put limits on screen time and advocate for real-time engagement between teachers and students through hands-on authentic experiences.

What are the goals of the campaign?

6.To promote a democratic, humane, developmentally appropriate public-school environment as an alternative to our current corporate, and often inhumane and militant, public school structure, which is most often found in high poverty communities.

Tell us about the first conference call.

One of the leading voices doing the research which sheds light on how corporations are increasingly controlling learning, student’s data and public spaces in general, is Alison McDowell. She blogs at wrenchinthegears.com Alison will be presenting a power point presentation that introduces participants to what data mining is, and how it’s done, and why we need to fight back (what will happen if we don’t). We will discuss how the increasing invasion of technology is harmful to children and then zoom out and take a look at the “big picture” of how these policies harm the future of public education. This presentation will be followed by a Q and A discussion where we consider what actions and resources parents, teachers, and communities have available to build a sustainable resistance against Education Reform 2.0.