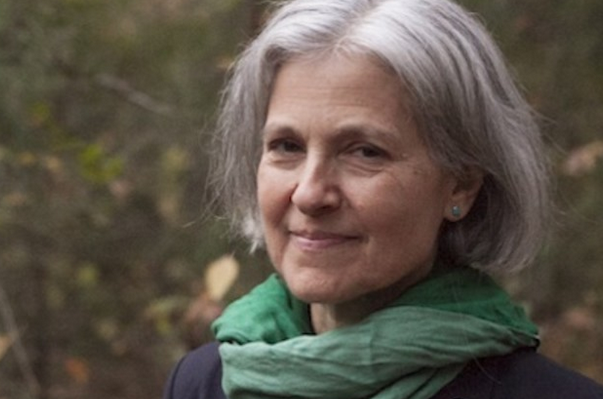 Can Jill Stein And Gary Johnson Crash The Debates?

Above Photo: via Wikimedia Commons

This is the third in a four-part series on the presidential debates. [Part 1, Part 2]

Ever since Democrats and Republicans seized control of the televised presidential debates, third party candidates haven’t fared well. But in this ‘Year of the Outsider’ two candidates – the Green Party’s Jill Stein and Libertarian Gary Johnson – have a chance to break into the debates.

The DNC/RNC-owned @debates are the establishment’s last defense against real democracy. RT if you want me in the debates with Clinton/Trump!

To get in, Stein and Johnson must appear on enough state ballots to win (which isn’t easy), and register at least 15 percent in five national polls (which regularly don’t include them). These requirements come from the official-sounding Commission on Presidential Debates (CPD), which was created by Democrats and Republicans in 1987 to wrest control of the televised presidential debates away from the nonpartisan League of Women Voters. Since CPD erected its 15 percent barrier in 2000, no third party candidate has made it into the debates.

15% puts @GovBillWeld and me on the debate stage with Trump and Clinton. With your help, we will get there! #TeamGov pic.twitter.com/BSJcy5eh8f

Mostly ignored by the press, third party candidates have little choice but to buy media to establish nationwide name recognition; the cost to reach 15 percent is upwards of $250 million by one estimate. That makes success all but impossible unless you’re a billionaire.

Despite the long odds, non-billionaries Johnson and Stein are knocking on CPD’s door. Both are polling ahead of where they were four years ago; Johnson as high as 13 percent, and Stein as high as seven percent.

The rise of their third party candidacies comes as the Democrats and Republicans are experiencing a historic lack of support; and have chosen, in Trump and Clinton, the most disliked major party presidential nominees in modern times.

Today’s paper, an unintentional reminder to look at third party candidates like @GovGaryJohnson or @DrJillStein. pic.twitter.com/vC6KnbIq7h

‘Anti-competitive’ As Stein and Johnson try to get into the debates, they’ve put aside ideological differences to team up in two lawsuits. In their suit against CPD and the 2012 campaigns of Barack Obama and Mitt Romney, Stein and Johnson allege the major parties have achieved “duopoly control” over access to the U.S. electorate through the use of “anti-competitive measures, including control of the presidential debates.” Campaigning for the presidency is a “multi-billion dollar business“ and the televised presidential debates play an essential role that “cannot be duplicated,” according to Stein and Johnson. They cite a 2012 Memorandum of Understanding between the Obama and Romney campaigns which, like prior MOUs, required the two major party candidates to debate exclusively at CPD-sponsored debates. With the debates starting next month, negotiations between the Clinton and Trump campaigns over their own MOU may be under way. Neither campaign, nor the CPD, responded to a request for comment; they also declined to say, if an MOU is signed, whether it’d be made public. “It ought to be public,” said Bruce Fein, attorney for Stein and Johnson. “Why not?”

As usual, Hillary & the Dems are trying to rig the debates so 2 are up against major NFL games. Same as last time w/ Bernie. Unacceptable!

Another lawsuit, joined by the Green and Libertarian parties, accuses the Federal Elections Commission of allowing CPD to make “illegal corporate contributions” to major party candidates, while “failing to disclose its contributions and expenditures.”

FEC regulations require debate sponsors to be nonpartisan, but “since its inception, the CPD has been bipartisan,” providing an unfair advantage to Democrats and Republicans over third parties, according to the suit.

Unable to get the FEC to act, the plaintiffs turned to the courts. But, as with the other suit, it’s unclear when a ruling will be made, potentially allowing the CPD-created status quo to continue through another election.