Can The World Unite For The Climate Crisis?

A team of researchers at Tufts University recently analyzed over five million scenarios predicting the future of the climate to answer the question of whether or not we can stay within the 2° C increase in temperature that is considered to be tolerable. The answer is uncertain, as most of the scenarios were pessimistic. They report: “The massive analysis shows that meeting that target is exceptionally difficult in all but the most optimistic climate scenarios.” They conclude that what is certain is the only hope for a livable future is to take swift action now to achieve “carbon-neutral energy production by 2030.”

Tim Radford of Climate News Network writes, “Unless the world collectively and in concert takes drastic steps to slow or halt global warming, generations to come face an intolerable prospect.”

Can the world unite to address the climate crisis? While millions of people are taking action toward that end, the US government, Wall Street and fossil fuel profiteers continue to put profit before the good of people and the planet. 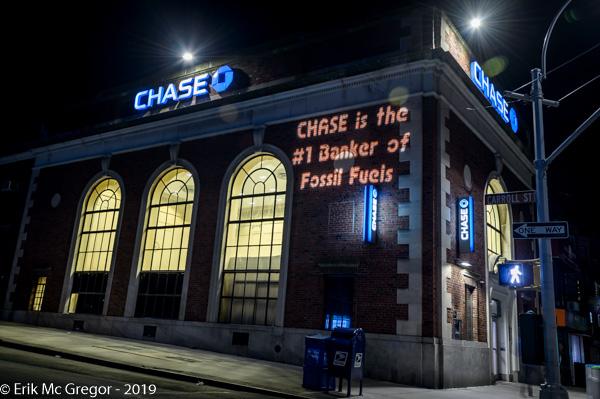 Local climate activists participated in the global launch of the Fossil Fuel Finance. On the eve of the report release, Chase Bank branches were illuminated by light projections related to the report finds. (Photo by Erik McGregor)

A new report published by Rainforest Action Network this week, the Fossil Fuel Finance Report Card, finds that 33 banks have invested $1.9 trillion in fossil fuel companies since the Paris Climate Agreement was signed at the end of 2015. The four top investors are U.S. banks: J.P Morgan Chase, Wells Fargo, CitiBank and Bank of America, accounting for $578.44 billion. Activists in New York City raised awareness of the report using light projections and holding an action at a Chase Bank branch on Wall Street.

All of this investment is leading to increasing greenhouse gas emissions. After flattening out a bit from 2014 to 2016, CO2 emissions are on the rise again and are expected to increase more this year. The rise is primarily due to energy use.

The United States is currently the largest crude oil producer in the world. This week, Mike Pompeo met with oil and gas industry executives in Houston to remind them of their vital role in fueling the wars to control the world’s oil. Bill Van Auken reports, “Pompeo’s speech provided a blunt description of US predatory aims across the planet that involve the interests of the American-based energy conglomerates.” He was open about US imperialist aims regarding oil in Iran and Venezuela.

According to the University of Michigan, in 2018, 80% of the energy used in the US came from oil, gas, and coal. Only 11% came from “renewable sources” and over 40% of that was biomass, which includes burning wood products or trash, ethanol and biodiesel. Biofuelwatch opposes biomass because of the large amount of land required for it, the large amount of energy used to produce it and the carbon emissions. Burning waste also poisons the air.

We have a long way to go in the United States to achieve 100% clean, renewable sources of energy. The largest source of new energy in the US last year was gas. In 2018, there was a slight reduction in the installation of solar energy with 10.6 GW of new capacity. New wind energy increased by 8% with the addition of almost eight megawatts (a megawatt is one-thousandth of a gigawatt). Wave and tidal energy production are just emerging in the US. So far, new renewable sources of energy are not displacing the use of fossil fuels, they are simply adding to the energy we already use.

In addition to reducing carbon emissions, carbon sequestration is also necessary to reduce the amount of carbon in the atmosphere, which is now well past the goal of 350 parts per million. New farming techniques, called regenerative agriculture, and restoration of wetlands can store large amounts of carbon. These are receiving more attention in the US. 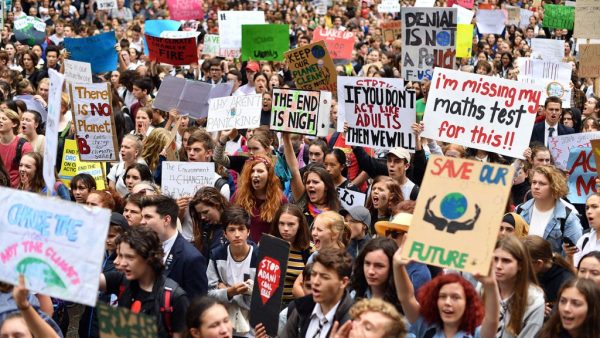 As we have reported, there are efforts across the US to stop new fossil fuel infrastructure. They are definitely slowing projects down and are succeeding in some places. Resistance comes in the form of pressure on agencies and lawmakers to stop permits from being given, physical blockades and lawsuits.

This week, a federal judge ruled in a case brought by a coalition of environmental groups to stop drilling for oil and gas on public lands. The ruling means public land in Wyoming can’t be sold for fracking and that drilling has to stop on more than 300,000 acres.

Another court decision this week by the United States Court of Appeals prevents TransCanada from starting construction on the Keystone XL pipeline. The case is ongoing, but this means construction will not be done this year.

Some of the most amazing climate justice activity is originating outside the US. Last August, then 15-year-old Greta Thunberg of Sweden started a “school strike for climate” outside the parliament building. The strike became a weekly action that has now inspired students across the globe.

On Friday, March 15, 1.4 million youth protested in a climate strike in 2,000 cities around the world in 120 countries. In Milan, Italy, the largest gathering, there was an estimated 100,000 people in the streets. Here are photos of those marches.

In the US, YES Magazine reports, half of the student leaders behind the climate strike are black and brown. They use horizontal organizing with an intersectional lens. They also use social media to communicate with each other.

Another global effort, the Extinction Rebellion, arose in the United Kingdom last fall. The Extinction Rebellion is a nonviolent movement targeting governments for their failure to act on climate. Participants hold creative actions, like this one in Scotland where they used blue paint to create footprints that symbolize the need to take action in the streets. Extinction Rebellion organizers in the US have issued a call to action for protests during the week leading up to Earth Day, April 15 to 22.

Both of these growing efforts require self-initiative. Anyone can join them by organizing activities in their community.

So, the good news is there is a growing climate justice movement in the US and around the world. The critical questions are whether it will have enough of an impact and in time to potentially make a difference. That is up to us. We can no longer sit this one out.

If you need some inspiration, listen to the words of Greta Thunberg about our dire situation: “We do need hope. Of course, we do. But the one thing we need more than hope is action. Once we start to act, hope is everywhere. So instead of looking for hope, look for action. Then, and only then, hope will come.”

And listen to our interviews with Marijn Van de Geer, New Movement Arises to Force Action on Climate Change, and with Dahr Jamail, Finding Hope in the Midst of Climate Destruction on Clearing the FOG.

March 28 – National Webinar on NATO and regime change in Venezuela.

March 30 to April 4 – Week of Actions Against NATO. March against NATO and US intervention in Venezuela on Saturday, March 30. Buses are being organized. Visit No2NATO2019.org for information about buses. There will be conferences on Sunday, and Tuesday, a peace festival on Wednesday, another march on Thursday, the day NATO ministers meet in Washington, DC, and an event by Black Alliance for Peace that night.