Above Photo: Kanahus Manuel of the Secwpemc Nation in front of one of the tiny houses set to block the path of Kinder Morgan’s proposed Trans Mountain pipeline expansion project.
Photo: Katie Lin / Greenpeace

Indigenous activists are using solar-powered tiny houses to block the proposed path of the oil pipeline across Secwepemcul’ecw territory. Could this become the ‘Standing Rock of the North’?

“We thought we’d only spend a few days at Standing Rock. Instead we were there for months,” recalls Kanahus Manuel of the Secwepemc Nation in British Columbia. “That’s the story of thousands of Indigenous peoples who touched down there at Oceti Sakowin camp. I know the same thing is going to happen here.”

The “here” Manuel is speaking of is the Tiny House Warriors Resistance camp in what is now known as Victoria, Canada. The 10 homes, which Kanahus says were inspired by the camps at Standing Rock, will be strategically placed to block Kinder Morgan Canada’s proposed expansion of the Trans Mountain pipeline. (The Canadian company is a unit of the eponymous Houston-based corporation.)

If the Trans Mountain expansion, which the Secwepemcul’ecw Assembly calls the “Standing Rock of the North,” succeeds, it would nearly triple the pipeline’s capacity from 300,000 to 890,000 barrels of crude tar sands oil per day. Canada’s liberal prime minister, Justin Trudeau, approved the expansion last November without the “free prior and informed consent” of the Secwepemc Nation, which the United Nations includes as part of its international human rights standards.

Similar to the Standing Rock Siouxs’ opposition to Energy Transfer Partners’ Dakota Access pipeline in South Dakota, the leadership of the Secwepemc Nation argues that the Trans Mountain expansion is unauthorized. “We the Secwepemc have never provided and will never provide our collective consent to Kinder Morgan Trans Mountain Pipeline Project,” the Secwepemcul’ecw Assembly declares on its website. “In fact, we hereby explicitly and irrevocably refuse its passage through our territory.”

The volunteer-built Tiny House Warriors Resistance homes are on wheels for easy transport to positions along the pipeline route, according to Living Big in a Tiny House. The site also reports that each structure will contain cooking facilities, bunk beds and a wood-burning stove. They will be “totally off the grid” and solar powered, with composting toilets outside.

“We need to put our boots on the ground. That’s the only way we’re going to get change,” says Manuel. “When we put our bodies right in the direct path, that’s saying something very loud and clear to the investors and insurance companies that will eventually finance or insure these pipelines if we don’t stand up and show the direct risk that’s involved. What we’re showing when we are building these tiny houses is that we have the authority as Secwepemc to live where we want on our homelands and we can put them wherever.” 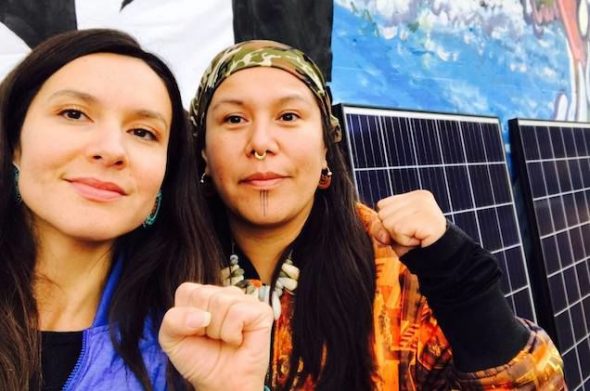 Activist Melina Laboucan-Massimo is one of several volunteers who recently installed solar panels on seven of the 10 tiny homes. Laboucan-Massimo, who is Lubicon Cree, grew up in the shadows of Canada’s Alberta tar sands, the third largest oil reserve in the world according to Alberta Energy. The lush boreal forests she once explored are now the site of wildfires. The pristine rivers in which she and her family drank from* a child are now contaminated with a toxic slurry of carcinogenic chemicals. The moose her family and her ancestors hunted for food now carry tumors that make them unsafe to eat.

“We’re at a point in history where we need to transition from our dependency on fossil fuels and transition to renewable energy and real tangible climate solutions,” she says. “Instead of talking about what the solutions are, this project is actually implementing them.”

Laboucan-Massimo says that people in Alberta are “economic hostages” of an oil industry that portrays its projects as the sole driver of job creation and a sound economy. Beyond being a tool for resistance, camp leader Manuel sees the tiny houses as an inexpensive model for housing in her community amid rising rates of homelessness.

“We have a big housing crisis in our nation right now because of displacement of our territory and the stripping of us from our land and [our ability] to benefit from the economic wealth of our territory,” says Manuel. “We need to be able to provide for our nation and this is something that’s not only a way to resist, but also a creative solution for us to solve our own problems that are impacting our nation.”

According to Manuel, 62 percent of Indigenous people in the area live outside the reserve, and that displacement contributes to a growing disconnection from Secwepemclanguage and culture. “People are forced to live in cities where they are paying high rents and struggling to survive. It just entrenches them further into the system, and that’s not what we want,” she says. “We have a right to self determination and that includes being able to build our own homes on our land and harvesting materials to build our own homes on our land.”

The tiny house movement is growing around the world as people are looking for options with a smaller carbon footprint. Laboucan-Massimo notes that Indigenous peoples have always had conservation-friendly net zero housing. For her, the Tiny House Warriors Resistance camp is an inspiration to transition back to that living style.

Manuel, who envisions sustainable villages made up of tiny homes with small-scale farming and language revitalization programming, calls the camp a matter of hope.

“We hope to bring back our culture that was so forcibly taken from us by the residential schools, the Canadian government and overall impacts of colonization and corporations’ destruction on our territories,” she says. “So with these tiny houses, there’s hope. There’s hope that we are going to lift ourselves out of oppression and economic poverty. It’s when we get onto our territory that our people, especially our young people, are going to wake up and connect to that land and defend that land.”

*Post has been updated to state that Laboucan-Massimo drank from the river rather than swimming in it.