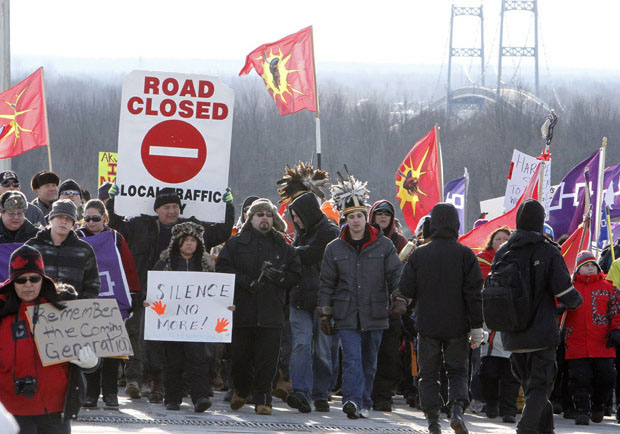 Secret documents from Canada’s spy agency show that the Canadian government was getting ready in case last year’s Idle No More protests “escalated.”

A heavily-redacted 11-page report — with one entire page missing — obtained under the Access to Information Act shows that the Canadian Security Intelligence Service was involved in preparing an all-of-government approach to dealing with the First Nations protests, which began in late 2012.

The redactions were, in part, because the information related to “the efforts of Canada towards detecting, preventing or suppressing subversive or hostile activities,” according to a letter from the spy agency.

The report repeatedly emphasizes that the protests had been peaceful, but considers possible triggers for escalation. The sections of the documents that actually deal with what evidence the government had that the protests might have taken a violent turn, and what it would have done if that had happened, were not disclosed.

The legible parts of the report and corresponding PowerPoint presentation, however, show that Ottawa, helped in no small part by CSIS, was planning for every eventuality, concerned by the decentralized, leaderless nature of the protests and the multiple motivations and influences that drove them.

CSIS had previously denied it had any role in monitoring the movement. After reports last summer that the spy agency and its anti-terrorism section had been keeping a watchful eye, the agency said it was only assessing threats against the Idle No More protesters.

Yet these documents show that CSIS’ involvement was a more formal endeavour.

The report acknowledges that “influences on the current situation” include the advent of warm weather, the impact of the youth in the movement, social media and that “success breeds success” — the impact there, it explains, is that “the lessons learned, experience and knowledge gained while garnering these successes will outlive INM, while informing future protests organizers and the success of their endeavours.”

While other government departments have no restrictions on keeping tabs on peaceful protests, CSIS is barred by law from snooping on civilians unless they have reason to.

Yet Idle No More organizer Clayton Thomas-Muller says that the movement has certainly had run-ins with CSIS.

“I have heard multiple reports of CSIS contacting various regional organizations from various First Nations over the last year,” he told the National Post. There has been an increase in the use of non-traditional tactics by CSIS to get one-on-one time from various active indigenous activists.”

Indigenous filmmaker and activist Clifton Nicholas confirmed that trend, saying that he’s been contacted by CSIS on three occasions. On one such occasion, he recorded the phone call and posted it to Youtube — the Aboriginal Peoples Television Network called the number back in September and confirmed that it, indeed, belonged to a CSIS agent.

On the second such occasion, he says, was after a lecture he gave at Concordia University, in Montreal. “I was approached after the class, I thought it was one of the students, and she invited me out to coffee. While I was out to coffee, I was passed a card that said Canadian Security and Intelligence Service, and it had the official logo on it. I got up and left.”

Ex-Reform Party leader Deborah Grey is tasked with making sure that CSIS’ data-collection methods, however they’re done, are  above board. She’s now the chair of the Security Intelligence Review Committee, which oversees the spy agency’s operations.

Ms. Grey maintains that, for CSIS to formally get involved, there needs to be reasonable grounds to expect a threat — even if that threat is a small contingent of the broader movement.

“If they would have a lead on something specific, they would be able to check that out, if, again, there is a threat-related idea,” she told the National Post. “I think that, if a movement proves itself, that it acting within peaceful protest, lawful advocacy, I don’t know that they would have a whole lot to be worried about.”

The CSIS report does note that a meeting was held in January, 2013 where “there was general discussion on the types of events which could potentially trigger greater protest, including potential violence and criminality. All agreed that the current situation was expected to remain peaceful, but that there were incidents that could further enflame the mood and actions of those protesting.”

This report was seemingly not shared with the Aboriginal Affairs, as the document was not included in a similar Access to Information request released by that department last summer. Those documents showed that the department used bureaucrats to closely monitor the movement, especially on social media. They also contain minutes from a meeting held between a handful of government departments, including CSIS and the secretive Integrated Terrorism Assessment Centre.

Ms. Grey said that, if CSIS was monitoring the movement, there’s little chance they still are:

“You can guess that there aren’t a whole lot of resources, so they’re not going to chase something if it’s over and done with.”